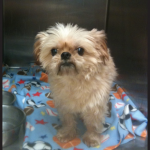 It’s the day after Thanksgiving. You have the day off and you are planning to hit the sales.  You wake up bright and early, walk into the kitchen and turn on the light. All around you is trash. Yesterday’s turkey carcass is in pieces and you notice that most of the bones are missing.  There is no doubt who did it because he normally meets you first thing in the morning for breakfast: your dog.  You are so angry because now you have to clean up this mess!  But first, you go looking for the culprit.  You find your beloved friend in his bed and he is obviously sick.  He has vomited multiple times and has even had diarrhea inside the house.  This is so unlike him!  You go to him to try to pet him and when you touch his belly, he cries out in pain!  Now what?  Your regular veterinarian is not open until later but your baby is very sick and in pain!

You decide to take him to the emergency vet where you fill them in on the last 24 hours:  the little bit of turkey and stuffing with gravy yesterday (it was Thanksgiving!), the pumpkin pie your kids gave him and then the trash, including the turkey carcass, overnight.   The veterinarian is astonished at what your dog has eaten.  She proceeds to tell you how dangerous these things can be, even in small quantities.  She goes on to explain that, in general, table food can be bad for your dog and can cause something called pancreatitis, and that he may have to stay in the hospital!  Radiographs (X-rays) show that the turkey bones are small and are not causing an obstruction or blockage.  However, the blood work indicates pancreatitis.

The pancreas is an organ that lies near the small intestine.  It has many jobs but one of them is to secrete enzymes to help digest food.  If these enzymes are released and activated prematurely, which can happen in response to a dietary indiscretion (i.e table food, foreign objects, etc), the pancreas can become inflamed.  With this inflammation comes pain, vomiting and diarrhea.  This is not to say that every dog with GI upset has pancreatitis but it has to be on the list of possibilities.  Blood tests can help to determine if the pancreas is inflamed or not.  This is important because if the pancreas is inflamed, called pancreatitis, your pet can be in danger.  Through loss (vomiting, diarrhea), dehydration, protein loss and electrolyte imbalance can occur.  These, in turn, can lead to other signs of illness and even death if left untreated.  Treatment usually includes IV fluids, electrolyte supplements, pain medication, anti-nausea medication and anti-diarrhea medication.  It can take days for a pet to fully recover from pancreatitis.  During this time, as long as they are not actively vomiting, they are fed very small amounts of a bland diet which is continued for a period of time at home.

All of this because of some Thanksgiving dinner?  Maybe next time you should just offer an extra dog biscuit or two.

Dr. Jen Lauer graduated from The Ohio State University College of Veterinary Medicine in 2007.  Prior, she received her bachelor’s degree in Biology/Pre-veterinary Medicine from Clarion University of Pennsylvania in 2001.  After completing veterinary school, she moved to Northern Virginia where she practiced emergency medicine for 3 years.  She has been employed at Valley Veterinary Emergency Referral Center since the summer of 2010.  Her medical interests include emergency, critical care, internal medicine and complementary medicine.