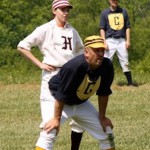 DC Area “Ballists” will recreate an early version of America’s pastime as “Cranks” cheer them on!

Historic Long Branch will host a vintage base ball (originally two words) doubleheader May 11, from 10am until 2pm. Visitors to the event will take a step back in time as they watch the Chesapeake Nine of Baltimore take on the Old Dominions of Virginia in a series of games played by the 1864 rulebook. Cranks (1860s term for fans) will feel as though they have returned to the late 19th century to see the ballists (baseball players), outfitted in old-style uniforms, recreate the game by playing by the rules and customs of the 1860s, which include the ability to tag out opposing players by hitting them with the ball. The lingo, uniforms, and equipment will provide cranks with a great show as well as a history lesson.

“We are ecstatic about hosting base ball games at Historic Long Branch exactly as they would have been played throughout America in the late 19th century,” said Nicholas Redding, executive director of Historic Long Branch. “The fact that Hugh Nelson, Sr., a resident of Long Branch in the late 1800s, was himself involved with the “Old Guard,” the local Millwood baseball team of that era, makes this event that much more exciting.”

This family friendly event will be held in one of Historic Long Branch’s spacious pastures. Fans coming to the event are encouraged to bring a blanket or a chair to enjoy the historic match. The entry fee is $5 per carload, and there will be food and entertainment available in between the games. Representatives from the Barns of Rose Hill, the Clarke County Historical Association, and other community organizations will be onsite to provide additional information and opportunities about upcoming activities in Clarke County.