To Help A Box  Turtle 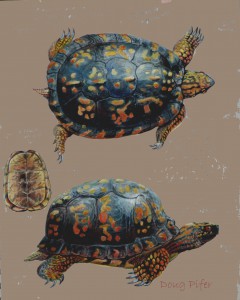 I’m worried. I have yet to see a box turtle this year. Box turtles are fist-sized land turtles so named because the underside of their plastron (the flat, bottom half of the shell that rests on the ground) is hinged like the lid on a box, so it can close tightly to protect the head and forelegs.

Box turtles hibernate during cold weather in the safety of burrows under piles of leaves and brush, remaining dormant until spring, when they travel to mate and lay eggs. Box turtles spend warm summer days asleep in the shade. In the cool hours of the morning and evening, or when it rains, they wander around looking for worms, berries, snails, and carrion.

I worry because all their travels expose turtles to people.

People and turtles have an uneasy relationship: we love and destroy them.  Native Americans in the Northeast revered turtles, but also ate them and used their shells for ceremonial rattles and talismans. Historians believe natives removed turtles from widespread areas to a point where they never recovered. Europeans built roads and broke up the forests, making the countryside much more attractive to the box turtle’s natural enemies, those egg-eating skunks and raccoons. Today, vehicles on highways kill far more turtles than the Indians ever did.

Even when we love turtles, we hurt them. For example, two people found box turtles along a highway. A thoughtful woman saw a box turtle whose shell had been broken, took it to a wildlife center, and drove on to where she was going—never thinking to tell them where she found the turtle. A kind man brought a highway-stranded turtle home, thinking it might make a cute family pet. Box turtles like to be fed but don’t like captivity. Feeling sorry for the turtle, his family released it in their backyard.

But didn’t both stories end up all right? Not for the turtles.

Wildlife rehabilitators can mend broken turtles. But they must know where to release them, otherwise the turtles have to languish in a permanent home for “rescued” box turtles. Box turtles are homebodies who prefer to stay in a home range of less than two acres. If they don’t find their way home they keep going, not necessarily in a homeward direction. Eventually they cross a busy highway where their journey will end.

To really help this beautiful turtle when you see one crossing a highway, safely pull your vehicle to the side of the road and walk back to the turtle—be sure to obey all traffic rules. Pick the turtle up behind the front legs, and carry it to the side of the road where it seemed to be headed, holding it well away from you (the worst most box turtles will do is to release a stream of urine). Set the turtle down well away from the highway, then walk away.

If the turtle appears injured, contact the nearest wildlife rehab center. Blue Ridge Wildife Center, Tilthammer Mill Road, in Millwood, serves Clarke and surrounding counties (540-837-9000, www.blueridgewildlife.org). Be sure to leave directions to where you found the turtle, so they can release it nearby after it recovers!