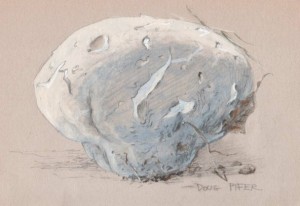 Just after school starts in autumn, big round puffball mushrooms pop up overnight, looking as if somebody scattered freshly baked buns in the yard.

As a kid, I remember the field where the neighborhood played baseball was a prime spot for puffballs. We called them smoke bombs and checked them daily after school. If they were white or mushy inside we’d wait. When they were finally dry, we stomped on them. Clouds of spores exploded into the air like brown smoke.

Puffballs come in various sizes and shapes. Some resemble cupcakes, skulls, or pincushions. Some grow singly in woods or fields, others in clumps on dead wood. One of the prettiest is the earthstar, a quarter-sized fungus that often pops up in bark mulch around flowerbeds or under a rotting dead tree. Earthstars start out like small puffballs but their tough outer husk eventually splits several ways. The husk peels back and the fungus resembles a tiny gray sunburst. Like other puffballs, the inside sack releases a cloud of spores when it dries out.

Giant puffballs, Calvatia gigantica, range from softball- to cantaloupe-size. Many grow bigger. A friend recently brought me a giant puffball she picked that was the size of a basketball.

Giant puffballs are covered with an outer rind that is whitish to light golden brown. If you cut one open, there are no traces of stem or gills. The fresh inside is solid white with a firmness like Styrofoam. In a day or two it turns yellow and mushy, then becomes a sickly green slime. After the puffball dries, its insides are a purplish-brown honeycomb that, when broken open, releases powdery spores.

I don’t recommend eating anything that grows in the wild. The edible giant puffball is one of a quartet of mushrooms known as the foolproof four: giant puffball, common morel, shaggy mane, and sulfur shelf. However, nature is NOT foolproof. Each of these four mushrooms looks like others that, while not deadly, might make you wish you were dead after you ate them.

Before eating any wild mushroom, know three things: exactly what kind you have, what poisonous mushroom species it resembles, and how to tell the difference. In short, become a mushroom expert first, then a mushroom eater.

Fungi are fascinating. Once placed in the plant kingdom, fungi now belong to a kingdom of their own because they share more of certain characteristics with animals. The mushroom you see above ground is just the fruiting part. A fungus is actually a network of white threads just under the surface of the soil. These threads connect with each other and with other plants—even the biggest trees.

Scientists have long known that fungi get their nutrients from other plants. Only recently they discovered that this interconnecting network, called the mycelium, allows fungi to exchange nutrients with green plants. In fact, all plants depend upon fungi to get many nutrients vital to their survival. Certain species of mushroom contain nutrients vital to the human immune system.

A pair of young American researchers recently discovered that under laboratory conditions, mycelium from certain mushrooms perpetuates itself and grows into a hard polymer that rivals plastics. This completely organic substance is now being molded into packing material and household objects. My wife just bought a kitchen utensil made of it. It looks and feels like hard plastic, but is completely recyclable.

Mushrooms may save the world!