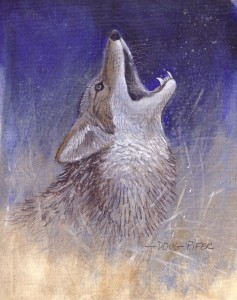 While working in my studio late the other night I heard a coyote chorus ringing through the October darkness. It sounded like a crazy Halloween party.

A real coyote sounds nothing like coyote howls played in the movies. A shrill wail breaks into a rabble of barks and yips that gradually fade into silence. It usually lasts less than a minute or two, but this time it started up again at least two more times.

Since the late 90s, coyotes have become well established in the Shenandoah Valley. And although my neighbors and friends had seen and even shot an occasional coyote, it embarrassed me that for many years I never saw a live Eastern coyote. To console myself I bought the tanned pelt of a big male coyote in prime condition from a taxidermist, who said it was taken in Shenandoah County. Hanging on my studio door, it measures exactly five feet from nose to tail, a magnificent art inspiration.

Finally one July morning in 2008, I noticed our donkey Zack staring intently across the field. Donkeys never miss anything interesting in their world, so I looked where the long ears pointed and saw a big coyote chasing a spotted fawn that had evidently been disturbed by the recent hay mowing. Both animals vanished into the woods, but the coyote reappeared. For several seconds it stood on a knoll, looked around, and then trotted along our back fencerow. I called through the kitchen to my wife, who looked out in time to see the coyote loping along as casually as a dog. My streak of bad luck had run out.

We saw its wolf-like shape several more times that summer, usually at a distance, standing at the edge of the woods or trotting across the field. Like the foxes and deer it evidently accepted our presence and never seemed particularly afraid of us.

About three weeks later my wife and I happened to notice a big groundhog sitting up on its hind legs in the backfield, apparently watching us. A movement across the field caught our eyes—a coyote appeared over a rise, hurrying toward the groundhog in a crouching run. The groundhog kept watching us until the coyote was almost upon it, when it turned and ran towards the woods. When the coyote caught up with it, there was a brief scuffle. We watched, spellbound, as the coyote bit into the groundhog, shook it, and then carried it away into the woods.

We stood in momentary silence with mixed feelings—amazement at what we had seen, regret we hadn’t had a camera to catch it on film, and a bit of remorse that the groundhog might still be alive had it not been watching us so intently.

Still, I feel lucky every time I hear that wild chorus.