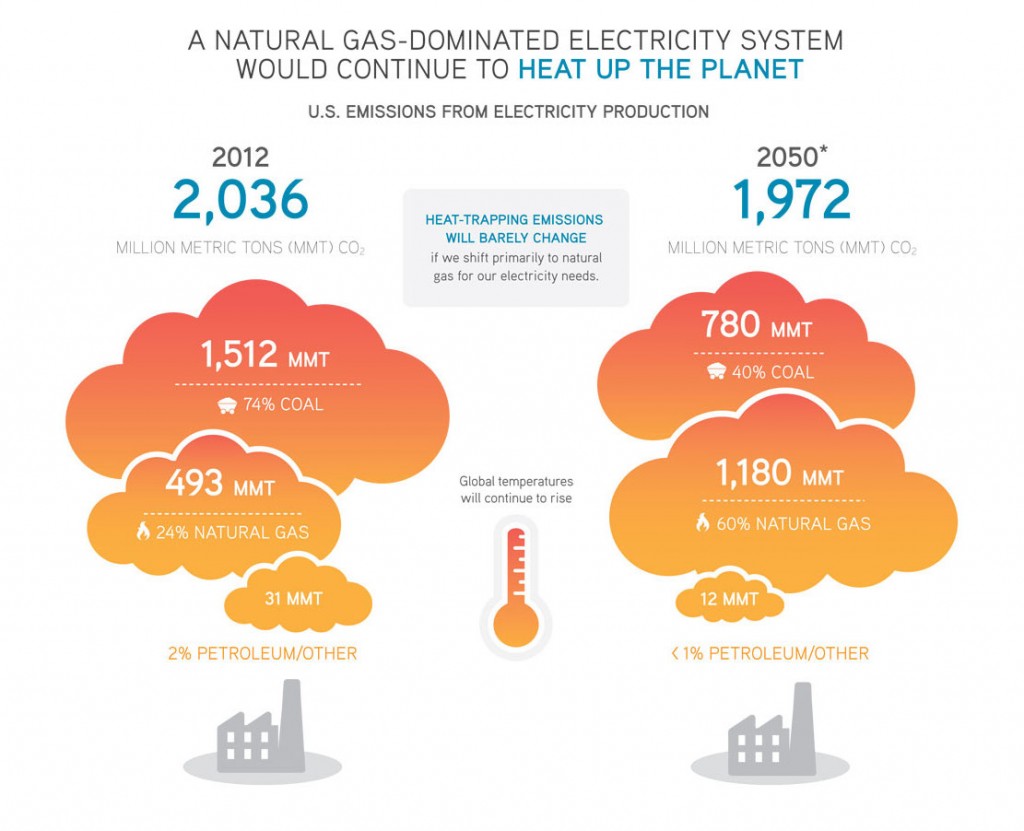 Overreliance on Natural Gas: Risky for the Climate and the Economy

In his State of the Union address, President Obama said: “The debate is settled. Climate change is a fact.”  The president noted that local communities are already experiencing  increasingly common drought, wildfires, heat waves, and coastal flooding—the damaging and costly consequences of climate change.

President Obama also celebrated the boom in U.S. natural gas production, calling it a “bridge fuel that can power our economy with less of the carbon pollution that causes climate change.” Burning natural gas to generate electricity does produce about half the carbon dioxide as coal.  But if the growth in electricity from natural gas continues, it will still be a significant source of carbon dioxide emissions. Even more troubling, natural gas releases methane—an emission at least 25 times more potent than carbon dioxide—when it’s extracted and distributed.

A recent UCS analysis shows that transitioning to a natural gas-dominated electricity future would not be sufficient to meet U.S. climate goals as power plant carbon emissions would barely change between today and 2050. This is because, in addition to replacing coal, natural gas generation would grow to replace aging nuclear plants and help meet the projected growth in electricity demand.

To limit the worst consequences of climate change, a 2010 National Research Council report recommended an economy-wide carbon budget that would cut U.S. power sector carbon emissions 90 percent from current levels by 2050. A natural gas energy economy won’t get us to these goals, but a pathway relying on renewable energy and energy efficiency can, and at a lower cost.

Our research found that using renewable energy to provide 80 percent of U.S. electricity by 2050 and boosting energy efficiency at a rate of 1 percent per year was the cleanest and cheapest path forward. By contrast, pathways assuming large-scale deployment of coal and natural gas with carbon capture and storage (CCS) and new nuclear plants were much more expensive and would take much longer to implement.

Renewable energy and energy efficiency are proven and mature technologies that are ready today to play a bigger role in powering our future.  The renewables and efficiency pathway would also shield the country from the economic risk of overreliance on natural gas, especially in the Northeast and Mid-Atlantic states, where recent high demand and competition for natural gas for both electricity and home heating drove natural gas and electricity prices to record high levels.

This demand has compounded supply constraints due to limited pipeline capacity, forcing some plants to shut down. The good news is that renewable energy — specifically wind power — helped reduce the impact of these outages and price spikes. As more aging coal and nuclear plants are retired in the coming years, a diversified electricity mix with renewables will be a more important buffer against rising and volatile natural gas prices.

Natural gas is a stepping stone, but increasing renewable energy sources and energy efficiency is a critical and more affordable, long-term solution to climate change, a solution that can create jobs and boost the nation’s economy. We should begin investing in our nation’s clean energy future today.

Steve Clemmer is the director of energy research at the Union of Concerned Scientists.