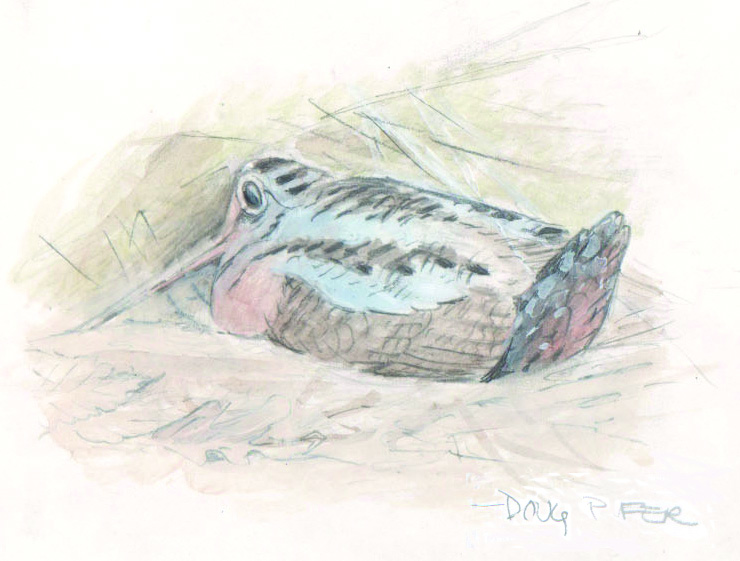 To me the late evening song of the woodcock means spring has truly arrived.

This year it came on the warm evening of March 6, a sharp dry “bzzt” repeated every 15 seconds or so. It came from the edge of the woods next to an overgrown pasture beside the house. The dry, toneless sound was more frog- or insect-like than anything you’d expect to come from a bird.

I listened with both hands cupped behind my ears. What came next was a light twittering made by the bird’s wings as they carried it unseen into the dark sky. The twitters got softer. I opened my mouth to better receive the sounds as they sped up in tempo and became more bubbly. There was a crescendo of “chip-chip chips,” then silence. Nearly two minutes passed before I heard the “bzzt” again, from the same field as before.

This is the love song of the woodcock, one of my favorite birds. The woodcock is  full of contradictions. It’s in the shorebird family but prefers wet woods and brushy fields. It wades in water but has short legs and un-webbed toes. When it probes its long bill into soft soil after earthworms, the flexible upper tip can grab a worm like a pair of tweezers while the bird’s mouth stays closed.

Enormous eyes, set ridiculously high on the top of the head, indicate a nocturnal lifestyle and reflect ruby-red when a flashlight shines on them.  The plumage has a dead-leaf pattern that a bow hunter might envy. During the day a woodcock will crouch among dead leaves or grass until you nearly step on it. At the last moment it will explode from the ground in front of you, leaving your heart pounding as it helicopters upwards through the trees and brush in twittering flight.

Such flights are generally short, and you can often follow the sound of their wings and flush them again. The three outer flight feathers are narrow quills that make the characteristic sound whenever they fly.

My favorite thing about the woodcock is its funny walk. The first time I saw a woodcock, many years ago, it was standing in the middle of a back road in front of my car. I slowed to a stop. When, after a brief pause it decided to start walking, I burst out laughing. “The woodcock walk” is a dance step I’ve enjoyed seeing many times since.

The last time I saw it was a wintry January day. I noticed a woodcock bopping merrily along through the snow under some loblolly pines. As it stepped slowly along, its body seemed to bounce up and down independently of its head and feet.  Dark and perfectly visible in the snow despite its dead-leaf camouflage markings, the bird stopped several times to probe the sandy soil with its long beak.