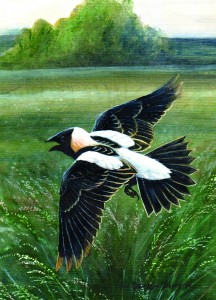 Several years ago my friend Ben Weddle asked me to be a tour guide at Oxbow farm as part of Warren County’s 175th anniversary farm tour. Since 1991 the farm’s hayfields have been managed to encourage native wildlife. The week before my talk, Ben gave me a tour of my own to see what the landowner had done. The hay fields were alive with medium sized, black and white birds with an exuberant, gurgling song—bobolinks!

As they chased each other about the fields, their white striped backs made them look like they wore white suspenders. Seeing the creamy patch on the napes of their necks, I could see why the old nickname for the bobolink was “skunk blackbird.”

The name bobolink derives from their bubbling spring song. To my ears, it’s as close to an outpouring of pure joy as any sound in nature. But this song is bitter-sweet to me. Bobolinks, never common, are now rare.

Originally birds of the prairie, bobolinks spread eastward when hay-burning horses were the means of transportation. But a combination of mechanized farming and changing land use kept the birds from thriving. Conservationist in the early 1900s called for farmers to delay their haying to allow the birds to nest. Still, the decline continued. Like most things in nature, the story of the bobolink is complex.

After raising their young in our hayfields, they depart on one of the longest migrations known among songbirds. They spend their winters in the grasslands of Brazil and Argentina. They return again in spring, but on their wintering grounds and en route they face additional dangers.

Consummate intercontinental travelers, bobolinks adapt their lifestyle and diet to suit their surroundings. In summer they feed their young on insects gleaned from the hayfields. But their fall migration route takes them through prime rice growing lands.

Early in the 19th century when rice was the primary crop in the low country of South Carolina, migrating bobolinks would stop over by the tens of thousands to fatten themselves in ripening fields. Farmers hired hunters to shoot “rice birds” by the hundreds and sold them in the markets as a delicacy.

After 1900 it became illegal to shoot or to sell migratory birds for food. But this didn’t stop folks in Mexico and Central America from shooting at flocks of bobolinks on their wintering grounds. A bobolink is called “butter bird” in Jamaica, and is a tasty morsel throughout the Caribbean. Changing land use patterns and development in South America also take a toll on wintering bobolinks.

Worldwide populations have declined about 2 percent per year since the millennium. But it’s not for lack of trying by the bobolink. On the breeding grounds, polygamous males often support three or more nesting females on their territory. Males protect and help the females raise their young. And unmated bobolinks, male and female, all pitch in to feed the nestlings.

To hear their ecstatic spring song, type “bobolink” on YouTube at SoundsOfNature.org to hear and see Lang Elliot’s professional quality video of a singing bobolink.