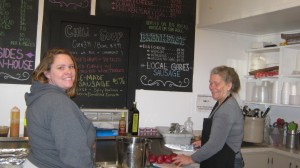 If you’ve travelled east of Berryville on Route 7, you no doubt passed the covered wagon that marked Hill High Country Store in Round Hill. And, it’s likely that you may have stopped to sample some of their famous pies. Sadly, they closed in 2014, but that doesn’t mean that you have to go pieless!

On July 4, 2015, Hill High opened in a slightly different incarnation on Route 340 just a bit south of downtown Berryville. It’s now called Hill High Bakery and BBQ Company, owned by Debbie Heimburger and her daughter Kyla. It is carryout only, but there are picnic tables outside for use in good weather.

Debbie was working nonstop as she talked, mixing up a huge tub of salad dressing, then quickly transitioning to chopping apples. “My in-laws owned Hill High Country Store,” she says, “and Kyla worked there weekends and school vacations. She now co-owns this store with me. We’re an all woman-owned business. There is no guy behind the scenes smoking the meat for us!”

She stresses that all the food is freshly prepared, and all of the meats are smoked right there. They make their own sausages—English breakfast, Italian and chicken. “And we will be smoking our own bacon.”

They feature pulled pork, ribs, beef brisket and chicken barbecue, for sandwiches, meals or by the pound. There is a long list of freshly-made popular sides like coleslaw, mac-&-cheese, baked beans, and potato salad. Most people commonly think of pulled pork when they think of barbecue, but Debbie says that an increasing number of people are choosing brisket as their favorite.

“Once they taste the brisket, they keep coming back,” she reports. Debbie is a certified judge in the Kansas City Barbecue Society. Why Kansas City? Because Virginia doesn’t have a barbecue society. And what does it mean?

“I can judge barbecue for taste, tenderness and texture. And they have meetings, and I get to go and eat a lot of good food!” she laughed.

She went on to explain that Hill High makes North Carolina style barbecue. “It’s all dry rub and we make a big variety of sauces.”

Kyla added, “We make all of our own soups and chili. We make chili daily and a soup of the day. What other soup we make depends on the weather. We try to use local produce in our soups.”

Along with barbecue, the big attraction is the pies. They regularly bake around 20 kinds of pies, as well as cakes, cookies, bread, rolls, quickbreads, and cheesecakes.

In addition to the pies you would expect — apple, cherry, and blueberry — there are surprises like walnut-caramel-apple, French silk, and five fruit (apples, strawberries, raspberries, blackberries and rhubarb).

“I love the pumpkin pie,” Kyla reported. “I could eat it all year round.”

Some days they bake half a dozen pies, some days three or four dozen, and more on weekends. They start baking early in the morning, and additional pies are baked as needed because they do not want them left over. They will bake pies for special orders.

Debbie and Kyla are happy that two women who worked at the old location made the move with them. Meghan Snapp does all sorts of baking and Kay Bowman runs the smoker.

Says Debbie “We all like to play with food. We’ll make different soups and try them on each other. Soups are a big competition.”

“Meghan bakes the cakes and cookies and things,” says Kyla. “If you want something special, she’ll bake it for you.”

Debbie explained that they relocated from Round Hill because she wanted to make changes to the property but they did not have a lease. They were excited when the present location became available.

“Lots of our old customers found us, and lots of new ones discovered us,” she says, “and the people in this area have been terrific to us and very encouraging.”

She threw in a plug for the talented yearbook production students of Clarke County High School who designed a new logo for the business.

Their biggest focus now is getting their catering business up and running. They can do large or small parties, weddings, and fund-raisers as well as pig roasts, meat-and-cheese platters, tubs of chili, and special occasion cakes.

“We can do anything from pick-up catering to full service,” says Debbie.

You’ll also find a big selection of locally-made foods in the store, including jams and jellies, honey, apple butter and salsa.

Debbie and Kyla are very environmentally-conscious, so they offer a rather unusual service. They will share their fresh produce trimmings for composting to anyone who brings their own bucket—first come, first served!