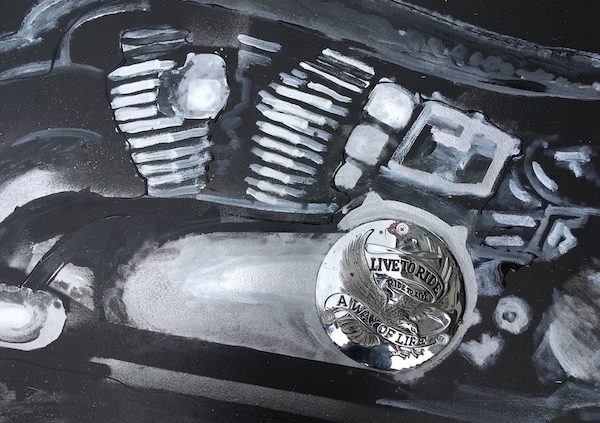 I like to make a wildly bold declaration and then spend some time creating a backstory that somehow justifies it. I put these thoughts down on paper. “M will say it right to your face. M realizes that saying it directly to your face is probably not his most endearing quality, so he puts a lot of miles on his motorcycle to cut down on
his opportunities.”

The story of M

M downshifted his big Harley cruiser, checked his mirrors, and throttled up to switch lanes, jumping out from the shade between two eighteen-wheelers into the left-hand passing lane. There was sand dust on M’s shaded goggles from an open-bed dump truck he’d passed a few miles back. Interstate 81 was packed with big diesel rigs moving America, which made it less than ideal for a long trip on a motorcycle, but it’s the fastest way home up the valley. As M accelerated to pass the 18-wheeler to his right, the brilliant light rays of a newly naked sun reflected chaotically off the silicate dust coating his glasses, and a mirror ball of blinding lasers sent him into a slipstream of flash-back hallucinations . . . .

M was hiding in muck up to his neck in the monsoon rains of the Mekong Delta. He’d been out in the bush for nearly a month. His body weight at enlistment had been 195 pounds. He was down to probably 125. M had eaten very little for several days, and was completely out of rations. He was barely conscious, existing in shadow, invisible, quietly grinding his teeth to keep from drowning. His boots were mired in deep mud somewhere down below him. He heard the report of a rifle … CRACK!

Then, M was in a schoolyard fight, ducking, weaving, trying to keep his feet underneath him and throw a decent punch. There was one kid in front of him, but he was surrounded by fifteen others. The bull ring. No way out. Nobody coming to help. Worried about getting sucker punched, he let a straight jab sneak by while he was leaning-in. SMACK!

And, M is standing on the front porch of the beautiful log frame home that he and his wonderful wife had built together. Dinner was on the table. Clean bill of health. Feeling like he wanted to die. The storm door he’d thrown open slams shut. BAM!

M had a mission. Take the enemy’s radio and call in an air-strike. People had already died. More people were going to die. M could die. M was more sure of death than not. M was in the shadows behind the fronds of tropical plants with his Randall knife clenched in his left hand. Fifty meters away was his objective, a bamboo hut on stilts surrounded by a deck. M heard boots on the deck. STOMP!

One kid was in front of M, jabbing at him with his fists. Another kid crouched down behind M, and M tripped over him and fell to the ground on his back without being hit. The hit came after the fall in the form of a kick to the head. THUD!

M was in a small office talking to a staff psychologist at the Veterans Administration. It was a long drive from M’s home to the VA office. He had been waiting patiently for hours to see this psychologist. M was explaining about the debilitating nature of his flashbacks and hallucinations, and how, even then, some fifty years after the fact, the PTSD was getting only worse and was worthy of the disability claim that lay on the desk between them. The staff psychologist calmly explained that if M could ride his Harley all the way out to the VA facility and express himself so eloquently, then that alone effectively preemptively disproved his claim. “I don’t even need to look at your claim again.” M slammed his closed fist on the desk. BAM!

“Dinner is ready!” called out M’s wife from her summer kitchen. M was on the porch with the mangy cat. Tears were rolling off of M’s face and splattering down on the matted fur of the mangy cat as images flashed through his head of brothers-in-arms and civilians lost, crises created, deflected, diverted and perverted. The blood lust of allies and enemies and the senseless deaths and destruction that is war. The mangy cat had been dying when M and his wife had rescued it. It should have been dead weeks ago and hadn’t eaten in thirteen days and nights. It was a mean cat, and took exception to M‘s tears splashing down on its matted head. The mean, mangy cat that had no name because it was assumed that it would be dead already then attacked M’s leg and found
flesh. YOW!

M was back on his feet. The two boys that’d flanked and felled him had receded. Next up was Lumpy Taylor. Lumpy had an extra lump on the back of his head. He was also known as Double Lump. M landed a punch and received two and then each kid landed haymakers simultaneously and chattered each other’s teeth. CHANG!

M peered into the enemy radio hut as best as he could from twenty meters out. He would have to break cover to get any closer. He prayed to a God that he did not recognize to give him the strength to mount a frontal assault on the guarded outpost armed only with his Randall knife and a cyanide pill. M’s soul was bound in darkness. There was no hope in life or death. The rain continued to fall. M used the darkness to summon his Chi. He was a wraith. Then M heard marching boots and shuffling feet. The enemy had a prisoner. The butt of a rifle crunched against bony flesh. UNGH!

“Thanks for nothing!” M stood and grabbed his disability claim papers off of the desk. The VA staff psychologist tried to grab them, as well. “Oh, so now you’re interested in my claim?” M left quickly and slammed the door behind
him. BAM!

It was Christmas Eve. M’s aunt and uncle and cousins were coming over for dinner and a party. M had received an early present from the family cat, a box full of kittens! M could hardly wait to show the kittens to his cousins. They were so adorable. “M, you better not bring those kittens outside. It’s too cold. Leave the box in the basement near the furnace.” M didn’t listen. His cousins would want to see these kittens right away.

It was 5 0’clock. The guests were due. M ran outside into a brisk twilight of falling snow with the box of kittens in his arms. M heard his mother call out, “Don’t leave the door open!” M set the box of kittens down at the edge of the driveway and ran back to shut the front door. M’s relatives pulled into the driveway and unwittingly parked the big left front tire of their Chrysler sedan squarely upon the box of
kittens. CRUNCH!

Fran was M’s second wife. She had brought him back out into the light and he knew to his core that she loved what was best in him. They worked well together, believed in the same things and fought for the same causes. Fran was M’s partner. He knew that he’d sailed the seas of many creations to finally find this respite from the ravages of eternity. This was his Eden. His forgiving and loving Eve was by his side and calling him to dinner. M thought of grabbing the mean, mangy cat by the scruff and going on a one-handed hundred-mile-an-hour bike-ride to put them both out of their misery. The mangy cat looked M directly in the eye. “That cat knows what I’m thinking.” “Yeoh.”

The bull ring drew in close. Two boys dragged M back to his feet. Next up, Fox Wheeler. Fox was every bit M’s equal and had the advantage of not already being knocked half senseless. M tasted his own blood on his lips, wiped his lips with his hand, and beheld his own red life’s milk. A terrible rage ran up his spine and he made a furious rush at Fox Wheeler, who calmly looked for an opening and delivered an uppercut to M’s sternum. WUMP!

Alive or dead. It didn’t matter. Everything dies. Kittens, children, heroes, villains, the Son of God. The fathers, sons, mothers, brothers, sisters and children of the lovely and dignified people that live and work in the Mekong Delta. M was authorized to call in airstrikes on anything that moved in the entire province of Vinh Long. Half a million civilians. 6,000 Viet Cong. Kill ‘em all. M’s closest associate, a fellow colonel, had succumbed to the barbarism and was wantonly laying waste to all that piqued his fancy.

He had done some damage to the enemy, but had inflicted a hell’s broth of horror on the civilians. M would’ve just as soon killed the Colonel as the radio operator in the bamboo hut. But M’s mission was to secure the enemy’s radio and call in an air strike that might very well kill them all. What had been M was already dead. All that was left was a killer on a mission. The sentries were changing. The second detail was late. The radio and operator were alone. Adrenaline shot through M’s depleted veins. He could hear the savage beating of his own heart. Thump! Thump! Thump!

Everybody was screaming and crying

Uncle jumped back into the big sedan and backed up. The box of kittens was stuck to the tire and rolled up into the Chrysler’s undercarriage. The kittens were all dead. M’s aunt was beating on her husband and cursing his name. Their marriage would never recover. Uncle turned off the Chrysler’s motor and it back-fired. BLAM!

M recovered his breath and stood tall in the middle of the bull ring. He was battered but not beaten, and rage still burned in his eyes. Next up was Big Timmy. Timmy was the biggest kid in school. M waded in, crazed and looking for
a knock-out.

M’s heart was pounding in his chest as he prepared to rush the enemy’s radio-shack and attack and kill the radio operator. M heard American jets coming-in on a bombing run.

Big Timmy dropped M with one ham-fisted punch to
the head.

M dove down into the muck as his own bombers laid waste to the radio shack and operator that he was stalking. SCRAK! White light.M upshifted and accelerated out of the slipstream beside the 18-wheeler on his right. The sun was behind some clouds and the road was clear, and M made it home for dinner, and I, for one, am grateful that he did. Because, even though it might not be his most popular attribute, when M has something to say he says it directly to my face. Then I wrote this down on paper.