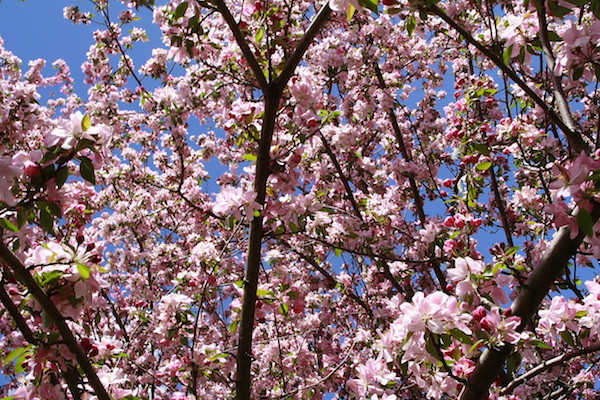 When I was a child growing up in Clarke County during the 1950s and 1960s, apple orchards were practically every child’s backyard. We played there, ate apples straight from the tree, worked summer jobs there, and when in high school, we developed the art of kissing between the rows of hundreds of thousands of apple trees, if we were lucky! But, as they say, “Nothing lasts forever.”

By the mid 1990s, orchards began to noticeably decline as a result of cut-throat competition from within our country and beyond, along with weather events that hampered maximum production. Today, half of the apples we consume in one fashion or the other are grown in China. But my purpose is not to provide a history and statistics, just a memory of a time that has since passed us by.

Apple orchards were so plentiful in Clarke County that they were a virtual extension of our play. The two largest orchard owners were the H.F. Byrd Orchard and the Moore and Dorsey Orchard. For those of us who lived in the Berryville area, there wasn’t a single child that didn’t find hours of play time in these orchards. So, you might ask, “What in the world could an orchard have that could ever possibly be such an attraction to children?” I cannot speak for all, but I can say what it was that attracted my two neighbors, Bill and Larry Tavenner, and myself. We lived one mile south of Berryville along Route 340, and across the road from us was the Harry F. Byrd orchard. Come spring, workers would begin stacking long wooden poles. These poles were anything from cut sapling trees to long narrow branches from larger trees, and were then stacked in a tepee style arrangement. The orchards would later use them to prop up the limbs of apple trees that were laden with fruit and threatening to break the tree branch from the sheer weight of these quickly growing apples. But, we saw the “tepee” as, well, a tepee. But they had no door in which we could enter, and so to work we would go, removing the poles in one area and then placing them on either side of our future entrance. Eventually, we would make it to the center where there was enough space for us to gather. Our tepee club house was then complete, but being active boys, standing around in our wooden tepee quickly became boring. It was time now to explore the miles of orchard land and any structures that might be found in the middle of it all.

Small water towers and abandoned homes would rise up out of the orchard’s heart like phantoms of man’s past creations. Most structures we found were old wooden water towers with a long spout that swung out from these stilted wooden planked tanks where the spray trucks would refill their own tanks with water and the additive chemical DDT. So far, Larry, Bill and I are still alive, but I would not recommend playing in DDT to anyone! Back then, no one knew the dangers of DDT like we do today.

Once the trees began to bear apples, the spray trucks would slowly crawl within aisles left between each row of trees, sending up a white cloud of pesticide to protect their crops. Both trucks and drivers were covered with a thin white coating, making them seem like ghosts riding upon their great mechanical beasts spewing their poisonous load. Little did we know, the DDT killed not only the mice, but killed chipmunks (I never saw a chipmunk here in Clarke County until maybe 20 years ago), played havoc with the deer population who ate the apples on the trees, produced side effects to the eggs of hawks and eagles who ate the smaller DDT infected creatures, which in time eliminated nearly all in this area.

Although we had great fun playing in these orchards, I would be remiss not to mention a few of the downsides of apple production, but I will not dwell on this issue. I would also be remiss not to mention that the apple industry provided hundreds of permanent jobs both within the orchard and in Byrd’s apple production facility, along with close to a thousand part-time apple thinning and picking jobs. The orchards were, in fact, Clarke County’s largest industry and economic engine.By late April, the trees would seemingly bloom overnight into one of the most beautiful sights in all the country.Miles and miles of land were covered with apple blossoms that turned the countryside white like a freshly fallen snow. Everywhere you went, including the town of Berryville, was scented with this rare, sweet, one-of-a-kind, fragrance. If you have never walked among apple trees in bloom, do so before you die! Nothing, in my opinion, can compare.

By June, the trees were showing their small round fruit, and once they became the size of a walnut, the apple battles would begin! We would first break off a small branch about the width of a pencil (the branch had to be flexible) and having a length of approximately three feet. Once we had chosen the perfect branch, we would take out our penknives and sharpen one end of it. Next, we would take our positions some 40–50 feet away from one another and stick a small apple on the end of our handmade weapons. Like some miniature hand held catapult, we would then fling the apples at one another. Rest assured, even though the apple flew off the sticks at a great speed, it also was one of the most inaccurate weapons ever devised by 10-year-old boys. Of the thousands of apples we hurled at one another, I can not remember anyone ever hitting their target. Eventually realizing that our battle would end in a draw, we moved on to testing our sadly inaccurate “weapons” in a competition to see who could fling their apple the greatest distance. I would like to say that I always won this contest, but since Bill and Larry are still alive, I am forced to be honest and defer to their apple flinging superiority . . . for now! Last man standing wins.

Ha! By July, the apples became too big to fling with our altered sticks of war, but bicycles, ponies and mopeds became regular sights in the orchards. Ponies, especially the Shetland pony, seemed to delight in trying to dismount us by running under the limbs of the apple trees where learning to quickly duck was a much needed skill. If there was no deviously evil pony available, a bicycle (a far more gentle mode of transportation) certainly was — and, for the lucky few, a moped. Mounds of dirt were built to create jumps that at the time appeared daunting to us as we approached our jump for the first time, but looking back, one was actually lucky if you could obtain separation between both of your tires and the ground. Oh, sure. There were those few who did defy gravity and later bought a motorcycle with their hard earned after-school money. I am happy to say that those early Evel Knievils such as Robert Tomblin, Sleepy Smallwood, and Flea Ladd, to name a few, have lived a full and primarily injury-free life.

By August, the apple crates were being stacked neatly and strategically throughout the orchards. They became our forts with minor alterations. Climbing to the top of these apple-crated structures we would then begin removing the center crates and stacking them up along the sides where eventually we could stand in the middle of our “forts” with little more than our heads visible. And why would we build these forts? For an apple battle, of course!These strategically placed apple crate depots were perfectly distanced from one another, where one could easily lob an apple from one makeshift fortification to the other. Dodging each others’ apples was fairly easy from this distance and, once again, casualties were a rarity. They only occurred when someone was hunkered down in their apple crate fort and unexpectedly got bobbed on top of their head by a slowly lobbed apple. Our orchard adventures were not measured in minutes or in hours. They were measured in the seasons of the year, with winter as our only interruption. There were no video games, no internet, and only three channels of black and white TV. Only the Saturday morning cartoons were of any interest to us at all. We had to make our own fun, but we never really consciously thought about having to do so. It was as natural as breathing. Although our fun might seem slightly dangerous by today’s standards, I can assure you, we never lost a single kid, and the worst injuries were typically nothing more than scratches and a few bruises. And we wore those bumps and
bruises proudly.

By September apples were beginning to ripen for eating. We all knew the different types of apples, and when each variety began to ripen. We also knew where the best eating apple groves were, and we took great advantage of this knowledge. Back then, the most popular apples to eat were the Red Delicious and the Golden Delicious. When we would get our fill of eating apples in the orchard, we would fill our tee shirts with these succulent treats, and graciously share them with our families like the little thieving Robin Hoods we were.

Although my old orchard haunts have long been gone, I can to this day show you where those Red and Golden Delicious apple rows were once planted. So, I would like to take this time to thank the Byrd family for these wonderful memories. These memories are as sweet as the scent of thousands of apple blossoms. As for the apples we helped ourselves to . . .  the check is in the mail.

Around Clarke County
Scroll to top