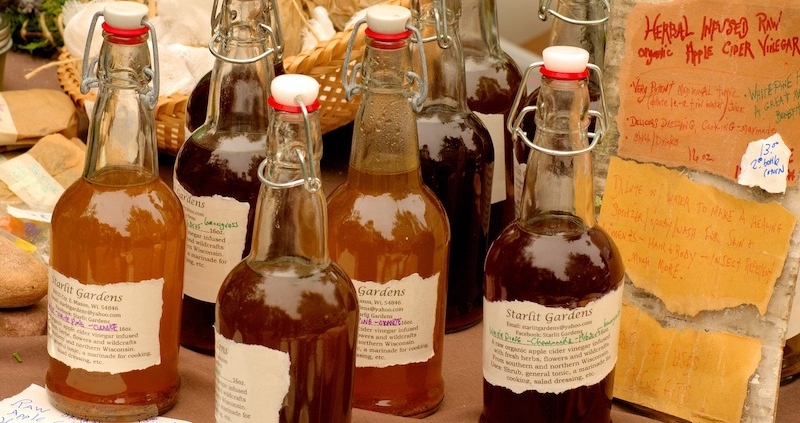 As an apple lover from way back, I’ve always felt partial to apple cider vinegar among all vinegar options. Tangy-sour, with a hint of apple juice, ACV has many uses in personal care, from dental, skin, hair and scalp, to combating toenail fungus. But most cosmetic claims for ACV have little research to back them up, so I’ll focus on a few culinary recommendations, mostly for the taste and nutritional boost of it.

First off, what is ACV?

ACV is a fermented food, made from the juice of apples (preferably organic), with yeast added, which breaks down the sugars and turns them into alcohol. Then bacteria are added, typically acetobacter, which converts the alcohol into acetic acid. The bacteria, also known as “the mother,” acts as a catalyst and provides a cloudy appearance. It might appear as strands of translucent shapes floating in the vinegar. Natural foods experts and nutritionists say that maintaining “the mother” within the vinegar provides a more nutrient-rich product than straining them out. According to The World’s Healthiest Foods compendium, “Potassium, magnesium, phosphorus and calcium are some of the minerals that remain in the vinegar when it is produced
this way.”

In the ancient practice of Ayurveda, a health system that serves as a sister science to yoga, the “sour” taste provides one of the six tastes essential to balanced eating, and ACV offers an easy entry point to sour. Ancient wisdom goes that if you compose a meal that includes all six tastes, you will be fully satisfied and energetically balanced. (The other “tastes” are salty, pungent, bitter, astringent, and sweet.) While the ancients knew little to nothing about the nutrient profile of foods, a meal that includes all six tastes often results in a nutritionally balanced meal.

ACV plus oil can provide a simple and infinitely customizable base for salad dressing. Think French vinaigrette: one to two tablespoons ACV; 1/2 tablespoon Dijon mustard; 1/2 cup olive oil, 1/2 shallot, finely chopped; salt and pepper to taste. Some people might like to add a small amount of honey (one to two teaspoons) to the recipe to mellow the sour taste (from the ACV) and the pungent taste (from the shallot). Shake up your concoction, and enjoy! You can also try infusing some herbs in the dressing. When I do this, with say, a stalk of fresh rosemary, I run the dressing through a strainer as I spoon it onto my salad. Ditto for straining out raw shallots or garlic. The dressing will retain the flavor without the strong bits included.

Marinades or Bone Broth, Anyone?

The internet abounds with ACV-laced marinades for meats. Outside of its addition of flavor, vinegar can serve as a meat tenderizer. Do an internet search for apple cider vinegar marinade, and
you’ll come up with loads of options. One vinegar producer, De Nigris, offers one of the best-sounding marinades I found (disclaimer: have
not yet tried it), along with cider vinegar barbecue sauce, “vodka sippers,” and
more. Find the recipes at www.denigris1889.com. And if you’re a fan of bone broth, add a tablespoon or two of ACV to your stock pot the
next time you gently boil bones for bone broth. The acid helps pull out the minerals,
and provides a rich flavor.

If you ever have a recipe that calls for buttermilk,
but not quite the whole quart that you’d need to buy off the shelf, you can easily make your own substitute with
ACV. Simply mix one tablespoon of ACV with a cup of milk. Let the mixture stand at room temperature for
5-10 minutes. Then use it as you would real buttermilk. For the lactose intolerant (or sensitive) among us: vegan buttermilk can be made by mixing the same portions of ACV with a cup of your choice of non-dairy milk
(almond, oat, hemp, etc.). You might notice little curdled bits in the mixture; throw those into your recipe, too!

Visit the Oakhart Farm Store to find not only ACV, but olive oil, a plethora of spices you can mix into your marinades, and of course local meats and veggies (oakhartfarm.com for location and hours). Martin’s also sells ACV. When possible purchase a variety that contains “the mother” bacteria, for a greater nutritional profile.

This medicinal tonic can be helpful during cold and flu season. It can be added to broth, tea, water, or another beverage. One to two teaspoons goes a long way. Nancy offers her top three uses for the tonic: at the onset of cold symptoms; for a vitamin C boost; at the end of a heavy women’s cycle.

Macerate the ingredients and place them into the vinegar in a jar with a lid. Steep mixture for a month in cool, dark place, shaking the jar daily. Strain off liquid through a sieve before using.

*Fresh turmeric might be available at one of our local farm stores. If you cannot find it there, FoodMaxx in Winchester has the orange variety fresh; you can use that instead of a mixture of orange and blue.

Welcome to The Buttery
Scroll to top