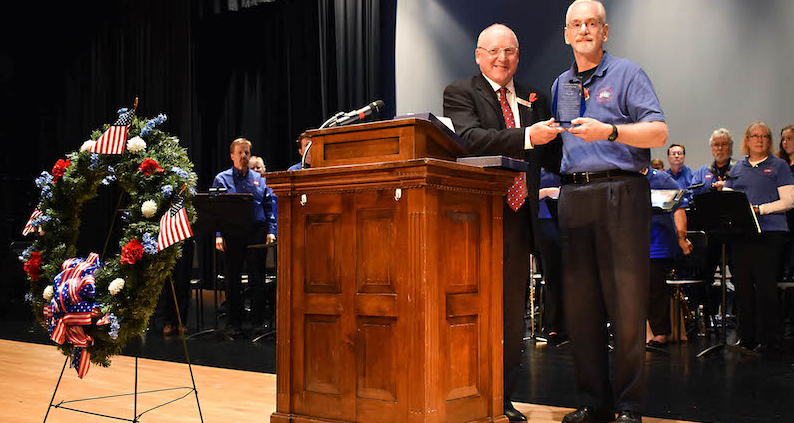 The “Berryville-Clarke County Veteran of the Year” award is given to local veterans who exemplify the tradition of the citizen soldier, whose dedication to the nation and their communities does not end when their military service is complete. The 2019 recipient is Chris Shipe.

After graduating from Bloomburg University of Pennsylvania in 1983, Chris Shipe served in the U.S. Army from 1983 to 1987. Stationed at Fort Hood, Texas, and in Germany, he served with the elite 2nd Armored Division whose motto is “Hell on Wheels.”

For most of his professional career, Shipe has worked with mutual insurance companies in Pennsylvania, Iowa, West Virginia, and Virginia, where he was directly involved in the leadership and governance of cooperatives. In 2003, he was named president and CEO of Loudoun Mutual
Insurance Company.

Chris Shipe and his wife
Diane live in Berryville, where he has served in various capacities on insurance cooperative boards and industry
committees, including as the chairman of the National Association of Mutual Insurance Companies’ Property Casualty Conference. Shipe serves on the Rappahannock Electric
Cooperative board of directors and is currently its president.

Shipe, 58, has been a volunteer firefighter since he was 16-years old. He continues to run calls, serving Berryville and Clarke County residents as a volunteer with the John H. Enders Fire and Rescue Company. He has been Enders president for 10 years. In his spare time Shipe enjoys restoring old fire engines.

Shipe is also a lay leader and chairman of the Duncan Memorial United Methodist Church Administrative Council. A talented musician, he is an active member and vice president of the Clarke County Community Band. He supports many local community
organizations through service and financial contribution.

Previous “Berryville-Clarke County Veteran of the Year” recipients are Norman deV. Morrison (2015), the late John F. Harris (2016), Michael L. Linster (2017), and Robert A. Freebee (2018). Their names are  on a perpetual plaque located in the Berryville-Clarke County Government Center. Chris Shipe’s name will be added to the plaque.