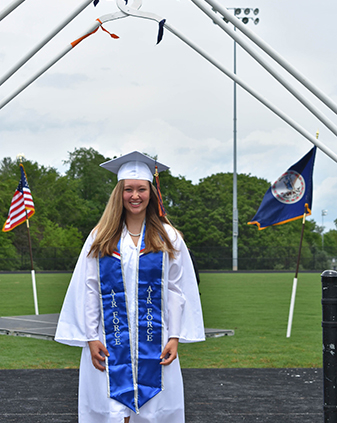 “When I was in Mrs. Elizabeth Miller’s eighth grade, I had to do an essay about someone who was 35 years or older,” Kassidy said. “I wrote about my O-pa, my father’s dad Milton Zugelder, who lives in Strasburg, Va.”

“O-pa retired from the Air Force after 21 years. I interviewed him and listened to his stories,” she said. “Then, presenting to the class sparked something inside of me.”

Military stories from both her grandfathers influenced Kassidy’s future. Her mother’s father, Richard Vance Kave of Clarke County and graduate of 1966, also joined the Air Force.

“I want to go places and do important things, and have some sort of bigger purpose to serve in my life,” Kassidy said. “In high school, I bounced around from basketball and DECA (Distinguished Education Clubs of America) to the Republican’s Club to robotics and anything I could explore to find my niche.” “Exploring opened me up to new people and new experiences,” she said. “I have always loved math and science; anything with numbers, I’m all over it.”

Kassidy attended honors classes, completed 30 college credits, and is graduating with an advanced diploma with goal to become a Pharmacist.

“I didn’t want my family or me to go into debt paying for college,” she said. So, at age 17 Kassidy talked with her school counselors and parents about joining the Air Force. “I’m going to be a 1N431 Fusion Analyst in the Air Force,” Kassidy said. “I’ll read top secret documents to detect security threats for the United States and annotate documents to send to higher-ups.”

“This is my best course of action,” she said. Not only because she gets a job now and money for college she added, “I want to find who I am as a person and get a chance to go out and help people.”

After meeting recruiter Air Force TSgt Joshua Walters in Winchester Va., her mom Abby Zugelder said, “If this is what you want to do, who am I to stop you from your dreams to be as successful as you can be?”

Kassidy’s high score on the Armed Services Vocational Aptitude Battery put her in the 99th percentile for science, 98th percentile for mathematics, and high 90’s for electronics. At age 17 she took early commitment with the Air Force Delayed Entry Program (DEP), which means she was locked in and waiting for an assignment.

After two-weeks of COVID-19 quarantine, Kassidy departs on July 7 for Basic Military Training (BMT) at Lackland AFB Texas, then five months of technical training school at Goodfellow AFB, Texas. “I’m so excited,” she said. “When I think about going, packing up soon, or anything that deals with serving in the military I get this feeling of butterflies,” she added. “It’s overwhelming sureness! I have never felt so sure of anything in my whole life.”

A Proud Moment
Scroll to top