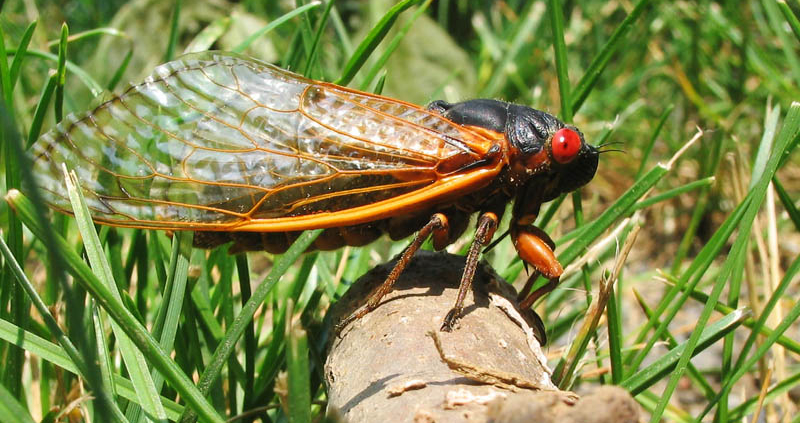 Plus, how to cook them

Exodus 10:13–15: … the Lord brought an east wind upon the land … and the east wind brought the locust … they covered the face of the whole earth, so that the land was darkened; and they did eat every herb of the land, and all the fruit of the trees … and there remained not any green thing … through all the land of Egypt.

Brood X  (10) of the 17-year periodical cicadas (Magicicada septendecim ) is coming this year! Many people call them locusts, doubtless because they appear by the millions, reminiscent of the locusts in the Bible story, but they are not locusts. Locusts are migratory grasshoppers that congregate by millions and devour crops, mostly in Africa and the Middle East. The only thing I can think of that locusts and cicadas actually have in common is that locusts were sent to punish the Pharaoh, and periodical cicadas have a call that sounds like “Pharaoh, Pharaoh!”

There are two types of cicadas, and they emerge at different times of the year.

The annual or “Dog Days” cicadas are so-named because they emerge in mid-August when Sirius (the Dog Star) and the constellation Canis Major begin to appear in the early morning sky. There are several species, with life cycles ranging from one to five years, but they overlap, so some emerge every summer. Since they do not appear in masses, they are mostly ignored and their buzzing calls are just considered a sound track of summer. They don’t call “Pharaoh!” Cicadas are piercing/sucking insects that don’t do any noticeable damage by feeding. Immature cicadas (nymphs) feed underground in their nymphal stage, sucking juices from tree roots — for 17 years in the case of periodical cicadas. There are also some 13-year cicadas, mostly further south, but they are less prominent.

When cicada nymphs mature, they burrow out of the ground and climb up on any handy vertical object to shed their nymphal skins and stretch their wings, leaving empty shells behind. They are soft and white when they emerge, but their exoskeleton soon darkens and hardens.

Adults suck a negligible amount of juices from plants during their short above-ground lives and live about a month.

The 17-year cicadas that consistently emerge in the same year in the same area are classified as “broods.” There are 12 broods, given Roman numerals I through XII.  Each brood covers a specific geographical region. We are under Brood X, which will emerge this year in parts of 15 states from New York to Georgia and west to Indiana. In our area, included are Winchester, Clarke, Fauquier, Frederick, Shenandoah and Warren Counties, Virginia, as well as the Eastern Panhandle of West Virginia.

The 17-year periodical cicadas emerge all at once in great masses, earlier in the year than the annual cicadas. They appear in May, and the very air seems to vibrate with their calls.

So, what do they do that affects us, besides making a lot of noise? Females make slits in tender young twigs and lay their eggs in them. When the eggs hatch, the nymphs drop to the ground and burrow in to find roots to feed on. As trees grow rapidly at that time of year, the egg slits can widen, causing the twigs to weaken and bend or break off. This isn’t a serious problem with larger trees but can be a real problem with young trees.

Broken or malformed young branches can spoil the shape of landscape trees. It is wise to cover young trees with nets—or just avoid planting new trees until fall.

The life of adult cicadas is strictly concerned with mating. All of the singing is done by males, who gather in groups in trees and sing in choruses to attract females. The males have drum-like structures that make their sounds. A vibrating membrane controlled by muscles is stretched over an air bladder on the abdomen that serves as a resonating chamber. Female cicadas are often attracted to the sounds of motors of garden equipment like mowers, weed-wackers, and hedge clippers, as well as garage and workshop tools like grinders, sanders, etc.

Fossil records show that cicadas have been around as long as 110 million years, sharing Earth with the dinosaurs, but their numbers are falling. That’s because of the
destruction of trees for “development.” If many trees are cut between 17-year cycles, the nymphs on the roots die.

There will always be adventurous diners who wonder whether cicadas are edible. Since cicadas are related to other arthropods such as shrimp, crayfish, crabs and lobsters, they are certainly edible. They are high in protein and low in fat.  However, if you are allergic to shellfish, you should avoid cicadas as well. Cicadas should be gathered for cooking as soon as they burst out of their nymphal skins, when their exoskeletons are still white and soft. Remove wings and legs. If their bodies have already hardened, they should be boiled first. Cicadas can be broiled, boiled, fried and otherwise prepared the way you would prepare other arthropods. A variety of recipes can be found on the Web. The taste has been described as resembling everything from soft-shelled crabs to asparagus. Have I ever eaten them? NO!  And I don’t eat shrimp or lobster either because they look like giant insects to me!