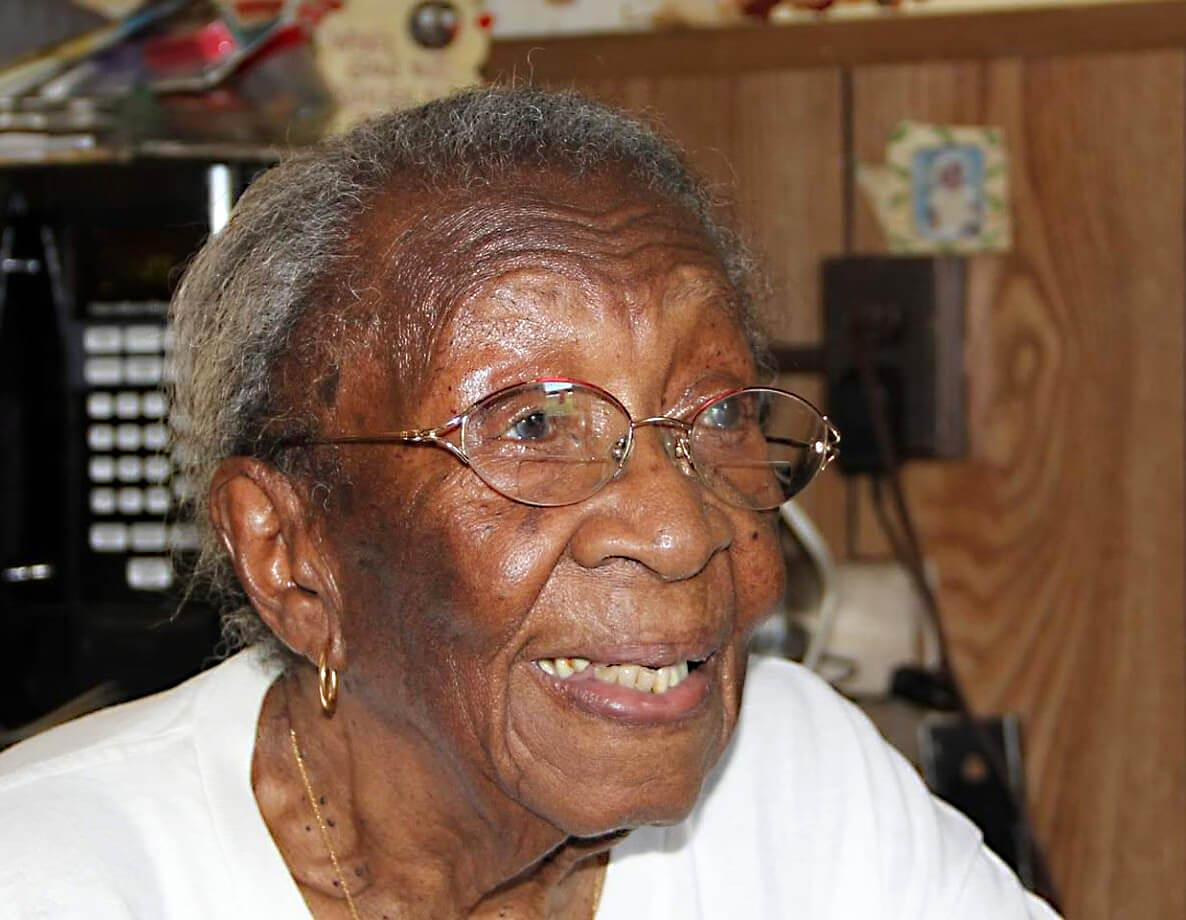 Berryville resident Viola Brown thought of herself as a simple woman who led a simple life. She worked hard, loved her family and friends, and had the greatest faith in God. To everyone who knew her, though, Viola Brown was simply extraordinary.

When Mary Viola Roberts was born in October 1911, William Howard Taft was the nation’s 27th president. Boston’s Fenway Park was under construction, and Ty Cobb was the American League’s MVP. Aviation pioneer Orville Wright piloted a non-powered glider for 9 minutes and 45 seconds one day that month, setting a world record that stood for years. And the National Urban League was organized in October 1911 to help African Americans migrating to cities find jobs and housing.She was in her 50s when the Civil Rights Act of 1964 was signed into law, but it wasn’t until she was well into her 100s that a Black man was elected president of the United States.

Mary “Viola” Roberts, who always went by Viola, was born on Oct. 4, 1911, in Hume, Va. She died of natural causes on May 21, 2022, in the Josephine Street home where she had lived since 1936. At 110-years, 229-days old, she was the oldest person in Virginia prior to her death.Viola Roberts was the youngest of James and Maria Roberts’ 13 children. In 1918, she and her parents moved to Webbtown in northeast Clarke County where they and Viola’s brother Harrison worked as laborers and domestics at Springfield Farm. Viola was seven when she began her life as a domestic service worker, earning 75 cents per week. She was earning $5 a week by the time she left the farm as a young adult.Springfield had indoor plumbing, but the Roberts family, being Black, were not allowed to use it. They lived in the basement.

A few years ago, Mrs. Brown recalled the move to Springfield took place toward the end of World War I. “I waited on tables, mopped the floor and washed dishes,” she said. She also received her elementary education at Springfield as there was a schoolteacher on the premises.Viola Roberts married John Strange Lampkin on Dec. 28, 1936, in Webbtown. They built their home in Josephine City, an unincorporated community south of Berryville. The primary structure of their home was a livery stable that Mr. Lampkin, a church deacon, moved seven blocks from Berryville’s Main Street to Josephine Street.

Josephine City was established in the early 1870s by former slaves and free Blacks, who purchased 31 one-acre lots for $100 each from the owner of adjoining Clermont Farm.Viola and John raised a son and a daughter in Josephine City while Viola worked as a cook at the Knoll, a grand home on South Church Street in Berryville. She returned to work as a cook at Springfield Farm in 1960.John Lampkin died in 1982. In 1988, Viola married The Rev. Paul Brown, the pastor of Zion Baptist Church on Josephine Street. After his death 10 years later, Viola Roberts Lampkin Brown carried on as the matriarch of the family that grew to include grandchildren, great-grandchildren, and great-great-grandchildren.

Mrs. Brown was always extraordinarily healthy. Throughout her life, she maintained a daily routine that included spiritual reflection. She often said, “God is love.” In a 2016 interview prior to her 105th birthday she said, “I owe everything to the grace of God. I get up every morning thanking Him for this day, and I don’t worry about tomorrow.”

Viola Brown taught Sunday School at Zion Baptist Church on Josephine Street for many years. “I had a dream to work with children,” she said, adding, “When I started, it was two children. So, I went house to house and asked the parents to let their children come, and I would take care of them.” Viola’s Sunday School class grew, and she managed the Youth Department and worked with the Zion Baptist missionaries. “I always ask the Lord to let me do something to help those less fortunate,” she said.

In that interview, she also said, “If you treat people right, they will treat you fair. Whether you’re black or white or brown or yellow, you can make it, but you got to do what’s right in your heart.”Mrs. Brown saw so much in her lifetime. World wars. Medical and technological advances. Two pandemics. The Civil Rights Movement and the election — twice — of a Black president. Asked in 2016 about all those changes, she offered, “The biggest change is that you can eat anywhere now and go into any store.”

Until recently, she rose each morning, dressed, made her bed, and went to the kitchen to prepare breakfast. She washed the dishes and kept herself busy. “I guess I’m full of nervous energy,” she said. “I can’t sit still. I see things that need to be done.”Berryville’s Town Council officially proclaimed Oct. 4, 2011 “Viola Brown Centennial Celebration Day.” Ten years later, the Clarke County Board of Supervisors presented her with a resolution proclaiming Oct. 4, 2021, “Viola Roberts Lampkin Brown,” and Virginia Governor Ralph Northam sent a letter in 2021 welcoming her to the “small, yet elite club of supercentenarians.”

Following her 106th birthday in 2017, Viola Brown received a signed letter from President Barack Obama. It read in part, “Over the course of a century, you have made extraordinary memories and woven your own unique story into the American narrative. As you reflect on your contributions to our nation, we trust you take tremendous pride in all you have accomplished.”Mary Viola Roberts Lampkin Brown was buried in Milton Valley Cemetery — one-half mile from her Josephine Street home — on June 4.

Though Viola Brown believed she led a simple life, she had a truly remarkable life. One that should serve as an example of love, kindness, and forgiveness to us all.

Print
Glass Recycling is Back Thanks to One Person Who Volunteered