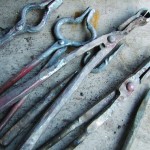 Story and photos by Claire Stuart

In Colonial America and during the settlement of the west, “the blacksmith shop was the hardware store of the day,” says blacksmith Phil Travis, who teaches a series of classes in this vital traditional craft. He explains that the town blacksmith made all the essential tools (and tools for making tools) for home and farm, from nails and hinges to shovels, axes, forks, pots and pans.

To 21st Century eyes, the most amazing thing about blacksmithing is that all of these things can be made using only a forge, an anvil, and a hammer. Tongs are useful for holding metal stock, but not essential.

Movies usually show the blacksmith at a huge brick forge, often making horseshoes. Travis explains that farriers are another type of blacksmith, and they specialize in not just making horseshoes but also caring for the horses’ hooves. If a blacksmith was the only metalworker in town, he would be making all of the implements and hardware, and horseshoes would be a very small part of his business. If the town was large enough, there was a blacksmith and a farrier.

The big brick forge in the movies also isn’t necessarily typical. Forges come in all sorts of shapes and sizes. Travis conducts his classes at forges that are about the size of a backyard grill. The forge is a very simple invention, requiring only a firepot to hold fuel and a source of air that is forced through to make the fire burn hotter.

Travis uses a coal burner and an electric fan, but explains that in third-world countries, blacksmiths use whatever fuel they have — be it charcoal, wood, or animal dung. The firepot can even be just a hole in the ground to contain the fuel and a way to blow air through it. For air, they might use a child blowing into a tube or operating a simple bellows made from animal skin.

Of course, nails were essential for early settlers, and Travis says that they were frequently made in the home. Mothers and children would make them during winter in the hearth fire. Often they would make enough to sell for extra cash, just as farm women sold butter and eggs.

Forging differs from other types of metal work because forging does not remove any of the metal. Travis explains that all blacksmithing is based on one or a series of just five processes. “Drawing” is thinning or lengthening a metal rod by heating and hammering it. “Upsetting” is shortening and thickening it by heating it and hammering in at the end of the rod. Then there is cutting (punching holes), bending, and forge welding (which joins two pieces of hot metal by hammering them together).

Blacksmiths generally work in dim light so that they can see the color of the metal being heated, which is essential to the process. As it heats up, the metal goes from dark gray through shades of red, orange, yellow and white. Golden yellow is the ideal color, and white is too hot, causing oxidation and flying sparks. 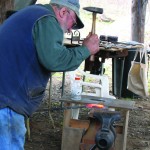 Travis has been interested in blacksmithing since he was about ten years old. As a teenager, he made a forge out of a hibachi grill. He recalls forging arrowheads out of 16-penny nails. He learned his skills by reading about blacksmithing and taking classes. In 1989, he took a class at the John Campbell Folk School in North Carolina with noted seventh generation blacksmith Daniel Boone VII, descendant of THE Daniel Boone.

Retired as an electrician and project manager with Xerox, Travis says he doesn’t call himself a professional blacksmith, but rather an enthusiast and hobbyist. He has participated in French-Indian War and Revolutionary War living history demonstrations, Shenandoah Longrifles and other events. He used to camp at the Belle Grove Plantation and he rebuilt the forge there, and he demonstrates at Sky Meadows State Park. He enjoys going to blacksmith “hammer-ins” and meeting people in the blacksmith community, who he describes as having “old American-style ethics.”

He has been teaching since 2011, and his classes are open to anyone age 16 and up. He says his students have included teens and seniors, men and women, office workers and construction workers, jewelry makers and artisans who want to make specialized tools for their craft.

“They can make a tool and then use the tool,” he says.

In his first class this year, Travis taught students to work with a coal forge, hammer and anvil to make wall hooks, nails, punches for metal work and several types of tongs. The punches made by the students were used to make holes for inserting nails to hold the two arms of the tongs together. It was interesting to see how many steps were necessary to make a small steel bar into a simple hook.

Student Jay Quintin was taking his second class with Travis. He said that he grew up on a farm and his father did blacksmithing to maintain equipment. He is trying to set up his own shop. “I make stuff like hooks and nails and give it away,” he laughed.

David Patton was taking his first blacksmithing class. He, too, says he likes to “make stuff,” especially “old school stuff” and also plans to have a small forge.

Travis recycles discarded metal and gives it new life. He indicated some pieces used in the class made from coil springs and a hammer he made out of a truck axel.

He notes that several popular old sayings came directly from blacksmithing, including “dead as a doornail,” “Strike when the iron is hot,” and “too many irons in the fire.”

Travis will teach two-day blacksmithing classes on several weekends from April through July and one five-day class. Absolute beginners are welcome in all classes and will learn to make items like bar-b-que tools, hammers, colonial boot scrapers, shelf brackets, and custom tools.

All classes are held at Opus Oaks Art Place, 2330 Crums Church Road in Berryville. For dates and details, e-mail gale.bowman-harlow@opusoaks.org or call  540-539-6685.

Well, it’s April and we’re finally into spring. No, seriously, I jest you not; spring is here!

If you’re able to look out your window while you read this and see some remnants of a snow mound—the one you’ve seen for at least two months—and you don’t believe me, you need merely look towards the Tidal Basin in Washington D.C., where cherry blossoms will bloom at their fullest between April 8 and 12 this year. That’s your sure-fire indicator that we’ve rounded the equinox.

What does spring mean in Real Estate World? It means hibernation has ended, people are beginning to walk out of their caves and bathe in the sunlight, getting re-motivated to do things like look for new homes and consider putting their homes on the market. If you’re one of those thinking of selling a home, now is a good time to size up what you need to do.

There’s a weird psychological thing that happens when people go house hunting. The condition of the house when the buyer sees it becomes, in their mind, the permanent condition of the house. So, if a buyer walks in to a sparkling tidy home they will subconsciously think “Wow, I’ll be so organized.” Conversely if they walk in to a home that is cluttered and messy, they’ll think, “Ugh, I’ll have to clean all the time.” Of course, this doesn’t make logical sense. Buyers do know that there’s no such thing as a magically clean house. Still, knowing how to prepare your house so that it appeals to the buyers’ subconscious experience can make all the difference.

Here are 5 tips for preparing your home for sale.

#1: Prepare your home for pics

It is like school picture day . . . for your house. Buyers are finding their houses online, which means having the house looking appealing on the web will reduce its time on the market. It doesn’t have to “be” neat and tidy, it just has to “look” neat and tidy when the shutter snaps.

It may cost you a trip to Home Depot and a weekend of your time, but taking care of the little things will pay for itself many times over when the offers come in. Pressure wash and seal that deck, mulch that garden, replace the 1980s hardware on the cabinets, replace those dead bushes. These are some of the details all buyers will notice—in their minds they’ll be thinking of all the things they’ll have to do if they buy your house.

#3: Be relevant to the buyer

We recently went to an open house and saw, sitting smack in middle of the living room, a wheelchair and some geriatrics equipment. Now, you tell me: is that how to prepare your home for sale? Nuh-uh. The golden rule for preparing your home is to appeal to buyers. Since you don’t know if your buyer will end up being an elderly couple, a young family, or a single professional, it’s better to be safe than sorry. Take down your child’s art, put away grandma’s oxygen tank, and replace those leopard print satin sheets with something, um . . . neutral. Just sayin’.

An important tip for how to prepare your home for sale is to avoid having a tenant stretched out on your couch eating a bag of Cheetos during showings. I tease, but truly, unless you have an extremely cooperative tenant, it is a good idea to be renter-free before you list. Keep in mind, when your house sells, your tenant loses their home, so it is not in their best interest to tiptoe around to help you sell faster. A little rental income is not worth losing your sale altogether.

For vacant houses, a couple of towels in the bathrooms, or a bowl of fruit and some cookbooks in the kitchen can bring it from looking barren to having a feeling of home. Although more common in markets like DC, a professional staging is often a worthwhile investment, particularly if you’re about to put a heavyweight home on the market—or if you’re out to demand a higher than average price for your home. We have worked with stagers in the area that can do a wonderful job at this, too.

Patrick Blood is senior partner at Blackwell Property Management and Real Estate Services. Contact him at patrick@blackwellmgmt.com or visit blackwellpropertymanagement.com.