Out + About in Winchester
By Keith Patterson
The excitement in the sold-out room was palpable. The “palp” in the air on this night was about the Bitter Liberals, who, after several successful years performing and recording as a four-piece with two guitars, a fiddle and a percussionist, played their first live show as a five-piece, including a bass player and a drummer on a full kit.
The Bitter Liberals have played at Bright Box Theatre multiple times, and have always drawn a crowd, so it was no real surprise that it was a packed house again. Clearly, for many in the crowd it was their first “Bitter” experience. These new fans quickly caught the buzz — they gobbled up advance tickets and left many Bitter Liberals groupies turned away at the door.
The opening act was a young Japanese solo guitarist, Hiroya Tsukamoto. His music incorporated classic Japanese melodies and textures with strong, Western rhythms and verse/chorus arrangements. He expertly utilized loop stations on both his guitar and vocals to create lush, evocative soundscapes worthy of an ensemble. The full-house was very appreciative and warmed-up for the headliners.
The Bitter Liberals are still co-fronted by singer/songwriter/guitarists Allen Kitselman and Clark Hansbarger. And Gary McGraw remains the ace-in the-hole sideman fiddler. These three players have developed a deep chemistry, and their playing together is a real joy. The new rhythm section, Michael Rohrer on bass and Nick Shrenk on drums, enhanced the nuanced sound of the band and played without a hitch. In fact, the more pronounced rhythms laid out a structure that really showcased the harmonies, melodies and solos of the featured players.
Allen Kitselman is a tone-hound, and when he plays guitar he produces some sweet sounds rooted in rock ‘n roll. Clark Hansbarger has more of a blues sensibility in his playing. And Gary McGraw, the classically trained hillbilly/Mozart fiddle player, generally just tears it up.
The Bitter Liberals mixed some outstanding new material into their strong set of mostly original songs. It is deep, evocative, emotional music. People in the audience laugh and cry as the lyrics and shared experiences hit home through the shimmer and jangle of well-played and inspired rock n’ roll.
This band is always on my radar for a live show and the Bright Box Theatre is a great venue to see them play. You can also get a meal and drinks and the wait staff is helpful and friendly. Never mind the cold, pouring rain outside. It was warm and rocking inside. Stay bitter, my friends!
For more information, visit thebitterliberals.com Join the bitter liberals email list by emailing: gem@garymcgraw.com.
https://clarkeva.com/wp-content/uploads/2018/02/DSCF0958.jpg 1223 2032 Jennifer https://clarkeva.com/wp-content/uploads/2017/08/Clarke-Nameplate3-1024x320.jpg Jennifer2018-02-19 13:04:592018-02-19 13:08:21The Bitter Liberals at Bright Box Theatre in Old Town Winchester 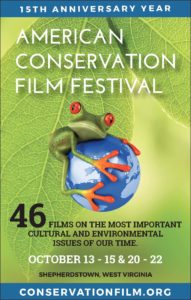 46 Exceptional Films on Wildlife, Rivers, Climate Change, Trees, and Conservation Heroes
The 15th annual American Conservation Film Festival opens Thursday, October 12th with a festive reception and free film screening and culminates with its Encore Award Winners Weekend October 20-22. The Festival brings together the finest conservation films and filmmakers from around the world and features discussions with scientists and educators, professional workshops, family programming, and social events — all with the mission of engaging, informing, and inspiring its audience through the power of film.
Green Fire Award winning film, Disobedience, tells the story of the powerful movement coming together across the globe to defend our planet from fossil fuels and climate change and the profound legacy of civil disobedience that has inspired these courageous activists to action.
The Gateway Bug, the 2017 Green Spark Award winner for Inspiring the Next Generation, exposes America’s disconnect with food as climate catastrophe, uncovering daily habits individuals can change to fix our broken food system.  The film is followed by a special tasting of bug protein products with local entomophagy enthusiast Steve Bailes preparing some tasty treats to share with film-goers in the Frank Center lobby!
As a special free event during our Encore Weekend, ACFF presents a film block dedicated to the relationship between earth stewardship and faith, with a presentation by Randy Tremba, recently retired Pastor of Shepherdstown
Presbyterian Church.
At four venues in and around Shepherdstown, ACFF invites its audience to explore the world through an offering of 46 compelling films. Several filmmakers and subject matter experts will be present during the festival and participating in discussions following the screenings of their films.
The Conservation Filmmaker Workshop is offered October 13 and 14 at the National Conservation Training Center and Byrd Center of Congressional History & Education to aspiring and professional filmmakers who wish to hone their craft, exchange ideas in a creative and collaborative environment, and expand their professional network with colleagues and industry leaders.  An exceptional opportunity awaits filmmakers who wish to pitch a film idea to a Pitch Panel of industry experts and compete for a $2,000 prize sponsored by The Allemall Foundation.
ACFF presents seven cash awards to outstanding festival films: the Green Fire Award for overall excellence in filmmaking; Green Spark Awards for highlighting sustainability, a conservation hero, and inspiring the next generation; International Film Award; Short Film Award; the Student Filmmaker Award, a $500 cash prize awarded to an emerging student filmmaker sponsored by The Friends of NCTC; and the Audience Choice Award. All of the award-winning films will be shown on the encore weekend of the Festival, October 20-22.
Full festival passes, allowing entrance to all films over both festival weekends are $55; First weekend passes are $40; second weekend passes are $25; and block tickets are $10. Senior discounts are available. Students 18 & younger are admitted free to all films as
space allows.
2017 Festival Trailer:
https://vimeo.com/231397659.
Film descriptions, schedule,
and ticket info:
www.conservationfilm.org.
Follow ACFF on:
Facebook (@conservationfilm.org),
Instagram (@conservationfilmfest)
and Twitter (@ConservationFF).
https://clarkeva.com/wp-content/uploads/2017/08/Clarke-Nameplate3-1024x320.jpg 0 0 Jennifer https://clarkeva.com/wp-content/uploads/2017/08/Clarke-Nameplate3-1024x320.jpg Jennifer2017-10-13 14:27:132017-11-16 09:55:15American Conservation Film Festival Screens 15th Season
Scroll to top