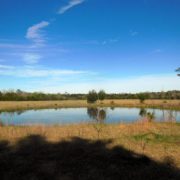 Clarke County Historical Association to present
3rd Annual Colonial Kids Day July 21
The Clarke County Historical Association is pleased to present the third annual Colonial Kids Day at the Burwell-Morgan Mill in Millwood on Saturday, July 21 from 10am to 4pm. Kids are invited to learn how daily life was lived in the colonial era. The day will include a wide range of hands-on activities such as scavenger hunts, craft making and more.
Kids can learn about blacksmithing, seamstressing, and watch colonial reenactors set up camp. The demonstrations will transport them back into time where cell phones, computers, laptops, tablets and many more technological advancements did not exist. They will play fun interactive games that require the finest hand-eye coordination.
Participants can watch a seamstress make the most
intricate patterns and beautiful gowns, and a blacksmith who takes pride in his work and shows it off as if every piece he makes is his best. The reenactors will show how soldiers dressed, felt, and fought  in the hardest of times.
Colonial Kids Day, sponsored by the Locke Store, is an informative day where kids get to have fun and learn a little along the way. Tickets are $5 per child and can be purchased at the door or
online at clarkehistory.org/events.  For more information, call 540-955-2600 or email
director@clarkehistory.org.
About Clarke County Historical Association: Founded in 1939, the Clarke County Historical Association (CCHA) is a 501(c)(3) non-profit dedicated to preserving the history of Clarke County. Their offices are located in the historic Coiner House at 32 E. Main Street in Berryville. The CCHA’s mission is to help preserve the historical resources and records of Clarke County and to foster their use, understanding, and enjoyment through stewardship and education.
Also located in the Coiner House is a museum, genealogy research library, and an extensive archive of historical material relating to Clarke County and the northern
Shenandoah Valley.
CCHA also owns the Burwell-Morgan Mill, a fully operational 18th century grist mill located in nearby Millwood.  Their volunteer millers grind a variety of grains as well as give tours of this historic site every Saturday from May through November.
https://clarkeva.com/wp-content/uploads/2018/07/Colonial-Kids.jpg 2952 3498 Jennifer https://clarkeva.com/wp-content/uploads/2017/08/Clarke-Nameplate3-1024x320.jpg Jennifer2018-07-20 09:58:362018-07-20 10:10:02Seamstresses, Blacksmiths, and Good Ole Times
Scroll to top