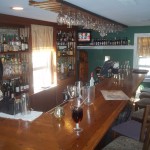 An informal haunt for locals and travelers

Tucked away on a second-floor corner of the Battletown Inn is a slice of Berryville’s real nightlife—but even though the Gray Ghost Tavern is named for a rumored phantom, the Inn’s owner insists that the only apparitions showing up there are the patrons.

“They say it’s haunted,” said James Lynch, who, along with Ming Chan, has been a co-owner of the establishment since 2006. “We’ve had ghost hunters wanting to explore. A paranormal group came in and heard some voices about two years ago. It wasn’t for a TV show, but they had all the equipment like you see on TV, for voice recording and television recording. They said they heard voices saying the words ‘get out.’ I heard their tape but I’ve never seen a ghost here.”

If indeed there are otherworldly dinner guests coming to chow down on Battletown burgers, it would be difficult to know which time period they’re checking in from: The Inn was built in 1809—the same year, noted Lynch, that both Abraham Lincoln and Edgar Allan Poe were born—and has served as a restaurant off and on for more than two centuries.

“We wanted to be true to the history of the building,” said Lynch. “We built a patio so people could dine outside, and we renovated all the rooms in the inn and added new equipment in kitchen. We didn’t change a lot of structural aspects, though. We mostly just freshened up the colors and made sure there were new amenities in the bathrooms. The history is one of the reasons people come here.”

His customers seemed to agree.

“I like the ambience, the historic ambience,” said Bonnie Savage. “It’s so interesting to come in here and see the period furniture, knowing this place is 200 years old.”

There are other reasons, too, that customers keep coming. The kitchen can whip up some mean fried green tomatoes, and the shrimp and grits is considered a restaurant highlight. The Gray Ghost meanwhile, offers something that’s hard to find in Berryville: a real, full-service bar.

“The atmosphere here is very different than anywhere else; it’s very cozy and nice,” said Scott Woodward, who’s been a bartender at the Gray Ghost tavern since last year. “And I’d say about 60 to 70 percent of our business, maybe even a little higher, is repeat business. You get some out-of-towners from D.C. or Baltimore coming in for the weekend, but mostly it’s local people.”

The Gray Ghosts boasts dozens of wines and an eclectic beer selection, and its patrons are treated to personalized options from Woodward, who has served as a bartender for two decades.

“I like to do seasonal things,” Woodward explained. “This fall I did Halloween pumpkin martinis, and I’m planning on some fruitier cocktails for summer. I’m going to have vodkas naturally infused with fruit instead of buying pre-flavored stuff. So a pineapple martini will be infused with actual pineapple. For a week to 10 days I’ll ferment the fruit and leave the vodka in it. It’s so much smoother that way. And now that it’s already 90 degrees I’ve got to get moving.”

Woodward’s efforts were not unappreciated.

“I like Scott,” said Bonnie Savage, the customer. “The Gray Ghost has a Cheers type of atmosphere, with local people who know each other mixed with out-of-towners. It’s nice. Plus there are so many options, from finer dining to pub dining to outdoor dining, and there’s live music. You can find pretty much anything you want here.”

Lori Mackintosh, a Berryville native and self-described repeat offender, agreed. “The restaurant uses local fresh produce to cook with,” she said. “Which is important to me, because that’s helping local farmers. I like the Gray Ghost. The bar setting is great, or you can eat outside. There’s all these dining options and such a versatile menu. It’s a great local business.”

Bartender Woodward said he hoped that versatility was what people would think of when the Battletown Inn came to mind.

“People think it’s a higher-end place, but it’s not just that,” he said. “You can come in for a fine meal, but you can get a cheeseburger and fries, too. The bar is very relaxed. I think we have the best food and drinks in Berryville. But, you know, I’m biased.”