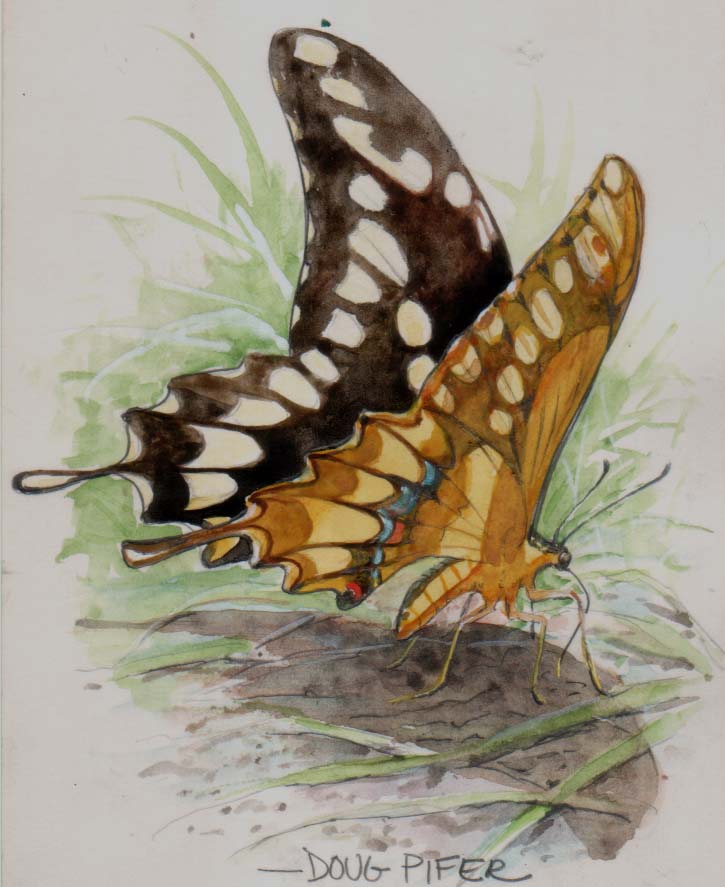 On the last day of the art workshop I was leading, where a year ago I saw my first Hickory Horned Devil, I saw another rare insect. A giant swallowtail, a wanderer from the south, came sailing in to quench its thirst in the wet mud next to the barn.

The workshop was being held in a studio in Gale and Malcolm’s barn. A hose and a pan had been set up outside the door for washing and cleanup. During the week the ground had became muddy there from constant wetting. The weather had been dry, and I’d noticed considerable butterfly activity around the wet grass all week long.  But today’s butterfly was different!

I had seen giant swallowtails once or twice, although only a glimpse. Sometimes one swept into our garden, stopping to hover at a flower, then soaring off on wings big as a man’s hand. Sometimes I realized what I’d seen only afterwards. But today’s visitor seemed to be in no hurry. For nearly a half hour it lingered and unfurled its long black proboscis to sip moisture from the mud.

Giant swallowtails are the largest butterflies in the East, with a wingspan of up to eight inches. Normally they live in the South where their larvae eat the leaves of citrus trees. Occasionally abundant enough to damage orange groves, these caterpillars are called orange dogs. They’re brown and white and resemble bird droppings. When disturbed or handled, they extrude a bright orange hornlike projection from their front end that produces a strong chemical scent, presumably to discourage predators.

Giant swallowtails are irruptive, meaning they make sporadic movements into the northern states in years when their populations spike.  In the past couple years they’ve been reported as far north as Ontario and Quebec. Sometimes they live in small breeding colonies well north of the range of citrus crops feeding on such non-citrus plants as wafer ash, prickly ash, and rue.

The butterfly’s faded, ragged appearance (I spruced it up in the drawing that accompanies this article) led me to imagine this individual giant swallowtail butterfly had actually made the trip from the sunshine state. It looked strangely tropical and exotic. A dramatic sweep of creamy spots boldly emphasized the breadth of its wings. Underneath, its wings and body were a deep creamy yellow. When the sun shone through its wings it was truly spectacular. The pattern on the upper surfaces reflecting through them made it look awash with Florida sunshine.

Its thirst finally quenched, the wandering orange dog moved on.