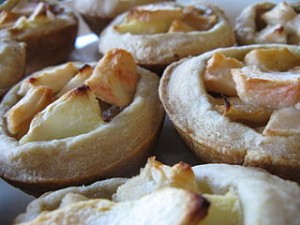 The sun’s bent southern angle has that warm glow accompanied by the snap of autumnal cool, confirming that summer is indeed over. It’s time to start tucking in to thick sweaters, bonfires, and warm, locally harvested meals back around the dining table.

We are fortunate that Clarke County remains a largely agricultural place with a bounty of local farmers, food, and cooks, some of whom generously shared their favorite seasonal recipes using locally grown ingredients.

We’ll start with something simple but rich and delicious, from Mackintosh Fruit Farm. Lori Mackintosh said their Apple Panini is a favorite there. To prepare, thinly slice a honey crisp apple  and generously layer on multigrain bread. Top with arugula and provolone cheese. Spread Boursin cheese on inside of other slice. Put together, and grill or cook in a pan sprayed with olive oil.

Kimber Herron, an organizer of the Clarke County Farmer’s Market and a volunteer at the Burwell-Morgan Mill, likes to use some of the product the Mill grinds every week in his cooking. The Mill grinds wheat, corn, rye, 5-grain, and buckwheat, depending on the week.  Kimber’s recipe for Buckwheat Crepes comes, appropriately, with an interesting history lesson.

Buckwheat originated in southeast Asia around 6,000 BC, and has been grown in America since the Colonial period, with peak production occurring several years after the close of the Civil War. By the turn of the twentieth-century, about a million acres were harvested. That number dropped to about 50,000 acres by the 1960s. During the 1970s buckwheat acreage increased somewhat, with U.S. production in 2011 reaching a little over 190,000 acres.

The Russian Federation produces most of the world’s buckwheat at slightly more than 2 million acres per year. Compare that to current U.S. acreage in corn, which is about 80–90 million acres. Buckwheat is nutritionally superior to all cereals, containing 18 amino acids, with an especially rich concentration of lysine. For a variety of reasons buckwheat is not easily amenable to modern industrial farming methods, and is thus an ideal cereal crop for the small-scale farmer or homesteader.

a pinch or two of salt

Whisk all of the liquids, eggs and salt together in a large bowl.

Mix in about 1/4 cup of the buckwheat. Whip well to remove any clumps. Drip test the mixture. Scoop a large spoonful of the batter and slowly pour back into bowl. If the drip stream stays together the batter is ready; if the drip stream separates into droplets, continue adding buckwheat little by little until the stream is continuous. You may not need the entire 1/2 cup of buckwheat.

Acquire a smooth griddle or large flat profile pan, preferably cast iron. Place griddle on stove at medium-high heat. Lubricate the surface with lard (preferably) or butter. When the pan is up to temperature, take about 1/3 cup of the batter and pour onto griddle/pan. Use the bottom of a large spoon to spread out the batter to a diameter of at least 10 inches. After a minute or two, peek under the crêpe with help from a spatula in order to check browning. 20-30% browning is sufficient.

Flipping a paper-thin 10” crêpe is tricky. If the crêpe is truly paper thin, you may not need to flip. Just set aside in a warming oven until the other crêpes are finished. Otherwise, carefully turn over crêpe with the aid of two spatulas—or a kitchen helper. Finish the uncooked side for another minute or two.

Matt and Ruth Szechenyi grow all kinds of wonderful products at their Briars Farmstead near Boyce, including eggs, beef, poultry, and pork. Ruth said this recipe is her sister-in-law’s favorite way to use their pork. She suggests accompanying it with rice, an Asian spicy noodle salad, or cucumber salad and a nice Pinot Noir.

Combine the cumin, scallions, jalapeno, ginger, garlic, 1 T veg. oil, brown sugar, soy sauce, five spice powder, 3/4 tsp salt and 1/2 tsp pepper in a food processor and pulse until a paste forms.   Lightly season the pork with salt and pepper. Rub with about 3/4 of the paste. Cover and set in the refrigerator 30-60 minutes. Preheat grill to medium. Combine the rest of the paste with the other 2 tablespoons vegetable oil in a small bowl and set aside for basting. Brush grill with some oil. Thread 3-4 pieces of pork onto each skewer. Grill, turning until marked all over, 6–9 minutes, basting with the remaining paste during the last minute. Let rest 5 minutes before serving.

Anyone who’s been to Locke Store in Millwood knows how tasty the food that comes out of their kitchen is. They shared two seasonal recipes with us, sure to thrill your taste buds.

2 cups half and half

Sautee first four ingredients over medium heat until onions are translucent (about 7 minutes).

Next, stir in half & half and heavy cream. Using an immersion blender or a food processor, blend soup until smooth.

1 large or 2 small tart apples, cored, but not peeled, and sliced thinly

Toss all ingredients together and spread in single layer (well spaced) on baking sheet. Roast about 20–30 minutes, or until golden brown.

Pre-heat oven to 350 degrees and grease loaf pans. Mix vegetable oil and sugar together. Add pumpkin and mix. Break up eggs separately in a small bowl, then add slowly to pumpkin mixture. Sift all dry ingredients together and then add slowly to mixture.

Scrape the bottom of your mixing bowl, and mix until all ingredients are evenly incorporated. Mix in raisins. Split batter evenly between both loaf pans. Bake until a toothpick comes out clean from the center of the loaf. Let cool completely in loaf pans.

Some things sweet, some things savory, all things to warm your kitchen and your belly during this beautiful season of harvest and home making. Bon appetit!