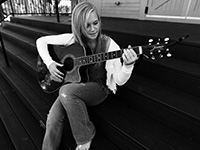 I often wonder if my credibility is suspect. After all, I’m a middle-aged white guy from a rural area. When I bang my drum and stand tall upon my soap box preaching about the importance of hunting in our community and our culture, I frequently feel like many who hear me shrug their shoulders and think, “Of course you think that. But how is what you are saying relevant to anyone who’s relevant?”

A few weeks ago I received an email from a young woman, Nicole, who is a college freshman. She wanted to share with me her first college essay. To me, she is the embodiment of relevant—a young woman who aspires to be a performing musician. She’s in touch with her feminine side, yes—and she hunts.

Following is the essay she wrote for her English class.

On the top of a hill in the heart of Judy Gap, a lone treestand is nestled inside the embrace of the vast Appalachian forest. To the untrained eye, this small heap of coal-black metal that seems to stick out like a sore thumb may appear quite out of place and insignificant. But to someone who has felt the thrill of the hunt and sometimes killed nothing but time in the stand, it is a unique provider of serenity, opportunity, and culture and is as natural as the sun rising in the east and setting in the west.

On approaching the treestand, the first noticeable aspect is the twelve-foot black ladder that serves as a gateway to the stand. It’s impossible to get into it without climbing this ladder and ducking at the very top to avoid the metal safety bar that wraps around like mother’s arms to protect hunters from falling. In the open-top treestand, it is just big enough for two people to sit on the improvised seat, which is made from cushions of two old chairs. These cushions are craftily attached together with bailer’s twine by an experienced hunter. Scattered about the seat are pine needles and missing chunks of foam from the mice that call the place home when no humans bother to come around. Tattered pieces of camouflage hang from every portion of the stand, blending it into the scene of the woods and hinting at its old age. As a whole, the treestand mimics the forest structure and seems to make itself a part of the natural landscape.

Surrounding the treestand are many sights, sounds, smells, and feelings that make it distinctive and peaceful. The structure is characterized by the rustling and scurrying of creatures into the pile of dead logs they call home, the swaying of the trees that seem to move in rhythm with the songs of the birds that are calling back and forth, and the quiet whisper of the hunter as he admires the sun peeking through the trees. On the crisp breeze of the morning air, the scent of earth and occasionally a whiff of wood smoke come wafting in and about the treestand. The tranquility that comes from sitting in the stand is overwhelmingly breathtaking and cannot be duplicated in any other setting.

The treestand may seem like a simple, meaningless structure but in truth it represents important, unique concepts. It is a place where clashing ideals seem to come into focus such as the taking of a life in order to sustain a life and the internal conflict between the guilt of killing and having pride in the trophy. The stand provides an opportunity to step into the culture . . . and feel a connection with ancestors by sharing a common activity from many generations past.

All in all, the treestand that sits as a minute part of the encompassing forest is not just an insignificant hunk of metal; it is a place of peace, a connection to history and heritage, and a truly unique experience.

I wish everyone knew what Nicole knows. I wish everyone knew that the words “peace” and “rifle” can be used in the same sentence and that dried deer blood under painted finger nails isn’t redneck, but enlightened. I wish more people understood that killing your own food makes you less of a hypocrite and that freedom isn’t a state of mind, rather the direct result of the things you do, or don’t do.