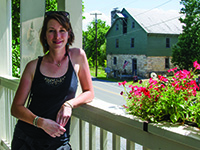 Interviews and photos by Jennifer Lee

“The door to my garage. My husband Jay designed the glass panel that’s in it, and it’s why I married him! It was on his front door when I met him.” —Peggy Duvall, 56, White Post

“My down sleeping bag that I got for Christmas when I was 17. I walked into the orchard late that night and slept in that bag. Almost 40 years later, and I still carry it with me and use it when I need to!”  —Glassell Smalley, 56, Berryville 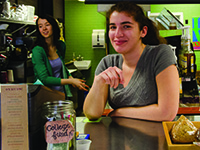 “All of them! As a hoarder in training, how could I choose?” —Hilary Dunn, 22, Berryville

“The snake bracelet from the Holy Land that my stepdad’s mother gave me. It wraps around my arm and has little red eyes and is about 70 years old. It was one of her favorite things that she bought for herself and she gave it to me. Unfortunately, I don’t wear it. It sits in a box because I’m afraid it will break.” —Jordan deButts, 28, of Boyce and New York City 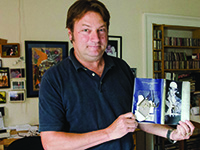 “My copy of Fear and Loathing in Las Vegas, by Dr. Hunter S. Thompson, that he personally shot with his pistol and signed to me. I received it as a gift from a dear friend who got to interview him for the Atlantic Monthly online magazine.” —Allen Kitselman, 54, Berryville 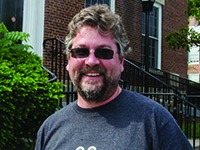 “My violin. I got it when I was 16, when I was finally big enough to hold a full-size violin, and I’ve been playing it for 31 years. I played it at Carnegie Hall when I was 16, and now I play it with The Bitter Liberals band.” —Gary McGraw, 47, Berryville