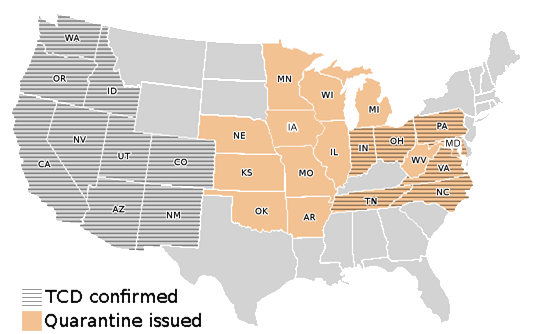 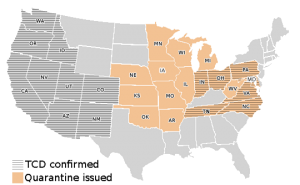 Ash trees in our region have been hit hard by the emerald ash borer (EAB). In my work with clients last year I came across numerous dead trees. And even among the living ones we would choose for treatment a significant proportion showed signs of infestation ranging from decline in the crown to larvae revealed under the bark. If you have ash trees on your property and have not taken steps to address EAB now is a good time to contact an arborist or forester to come up with a plan.

Well, guess what? There is another threat to our trees looming on the horizon. It is called thousand cankers disease (TCD) and it aggressively kills black walnut trees. TCD results from a fungal pathogen native to the western US transmitted by an insect called the walnut twig beetle. The fungus causes patches of dead tissue, known as cankers, that coalesce and lead to the death of entire branches and ultimately the entire tree (see image). A few years ago the disease was detected as far east as Tennessee and it has been working its way up the I-81 corridor since then. Warming climate conditions are pointed to as a promoter of this spread.

Treatments for the disease itself are not available, so the remaining options include controlling the beetle and/or making plans for walnut tree mortality in coming years. I have learned from University of Maryland entomologist Mike Raupp that good control of the insect in individual trees should be possible using the same chemical some arborists use for EAB control (Tree-Age® or emamectin benzoate).

There are no reported detections of TCD in West Virginia but the state has issued an exclusionary quarantine due to confirmed detections in surrounding states (see map). In my unofficial opinion this means that the disease is present in parts of our state and it is simply a matter of time before it is detected.

According to West Virginia’s Department of Agriculture black walnut has an estimated value of $500 billion in the eastern US. Additionally it comprises a significant portion of our forest ecosystem and is a cultural favorite of many West Virginians. I have met people who think of their walnut trees as their college fund – plant a grove at the time of your child’s birth and harvest the timber in time to pay for college tuition. And how many woodworkers out there appreciate the beauty and versatility of walnut wood?

If our experience with EAB is a guide, we should not wait until TCD is recognized as a region-wide problem before developing a plan. We got caught behind the curve with our ash trees and should take steps to keep ahead of the curve with our large walnut tree population.

Visit this multi-agency website for more information on TCD: www.thousandcankers.com

Shawn Walker is a consulting arborist at Trees 101 (www.trees101.net) based in Shepherdstown.