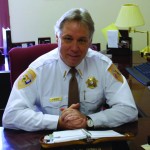 Clarke County Sheriff Anthony “Tony” Roper is getting statewide attention for his dedication to Clarke County. On March 18, Governor Terry McAuliffe announced the new appointments to his administration, including asking Roper to serve on the Criminal Justice Services Board. The appointees, including Roper, will help the governor find common ground with members of both parties on issues that will build a new Virginia economy and create jobs.

The 28-member board, comprised of members of the criminal justice system, local government officials, representatives of the private security industry, the public at large, and General Assembly members, provides governance and guidance to the Department of Criminal Justice Services. According to the General Assembly, the CJS Board is responsible for “planning and coordinating the implementation and administration of criminal justice and delinquency prevention and control throughout the Commonwealth.” Board terms are two years.

Roper is happy to have been appointed to the board. “I have worked diligently in certain aspects of areas covered by the board, and I have ideas I would like to see considered,” he says. “Maybe my interest caught the Governor’s attention.”

Roper was born and raised in Clarke County. He entered law enforcement in 1978 and was elected Sheriff of Clarke County in 2003. His experience in the sheriff’s office has changed as he gained life experience. “I joined the sheriff’s office right out of high school looking for excitement and adventures,” he says. “I grew up watching cop shows on television and thought that was the career for me. And for many years, it was all about the running and gunning of catching the bad guys. I identified with capturing them and putting them away.”

Over time, however, that led him to examine the profession and what those invested in it were and are accomplishing. His work with drug enforcement in particular led him to think specifically about the use of law enforcement in dealing with the problem. “We seemed to be arresting addicts repeatedly for the same type of offenses, with no one leaving prison habilitated. While the addicts themselves need to take some ownership, I believe that we can’t do the same things over and over again and expect different results,” he says. Roper has taken this commitment to reevaluation seriously. He served as a founding member of the Northwest Virginia Regional Drug Task Force and was a member of the regional FBI Drugs and Violent Crime Task Force.

Additionally, he realized the importance of evaluation of practice in the office. For instance, he questioned whether the department was making the best use of technology. The office now uses video conferencing for some court appearances that do not necessarily require the inmate to appear personally. “This allows us to keep incarcerated folks behind bars, and we do not have to transport them from the jail,” Roper says. “The community stays safer, and we make a better use of our limited manpower resources.” In general, he sees the profession as one that “can be complacent and do things because we always did them that way,” but he believes “we must challenge everything.”

He decided to run for sheriff initially because he saw some things he believed he could change for the better, and wanted to leave his mark on the county. At the time he ran, he says he had a group of loyal followers in the department who were doing a great job, and he wanted to ensure that the new sheriff took care of those folks as well.

Roper gained the employees’ loyalty in part because he kept them on board. Sheriff’s employees serve at the will of the sheriff, so he could have “cleaned house,” as he says, when elected. But he wanted his employees to feel secure in their future. “I believe their loyalty is inspired by a great working environment here,” he says. “We cannot compete with some salaries offered, particularly with larger, more metropolitan offices to the east. But we do offer a chance to make a real difference here.”

The office itself has been exceptional, achieving reaccreditation from the Virginia Law Enforcement Professional Commission in 2015 with a perfect score. This reflects many hours of assessment of their operations. Deputies have received a substantial increase in training hours, and the office plans to maintain that aggressive training schedule in 2016.

Roper can also point to many tangible achievements he is proud of, including “new facilities, the creation of a rank structure, and the adoption of standard operating procedures.”

These accomplishments, however, are not as important to Roper as the fundamental idea of responsibility to community safety. “Every decision we make in the Sheriff’s Office is made with our mission in mind,” he says. The mission of the Clarke County Sheriff’s Office is “to provide a safe community through customer service-based policing. We achieve this mission through professionalism, respect, and ethical service.”

“This outlook,” Roper says, “keeps us focused as we make decisions ranging from how we handle the dispatching of a fire, handling a mentally ill subject, or deciding how much money we need to ask for in purchasing equipment.” Roper has a reputation for serving the community well, which he believes is his mission. “I truly believe we are sworn to do a job,” he says. “And that calling to help people is a noble one, one that we are lucky to answer.”

Along these lines, Roper describes the most rewarding element of his job as “encompassed by all the services we are given the opportunity to deliver. When we issue a speeding ticket to someone, I truly believe we are taking steps to save a life.”

“The same goes for every time we answer a call for any service,” he says. “We are the protectors, and proud to serve as such.”

The office is offering community service in the form of online safety presentations geared towards protecting children online. According to the office site, presentations are available for a variety of age groups, including parents, teens, tweens, and small children. These one-hour presentations give statistics, online resources, videos, and expert tips to engage, educate, and empower children and adults to be safer on- and off-line.

The office has changed dramatically in recent years, in that many calls for service involve quality of life issues and neighbor disputes. “Not long ago I never would have dreamed that Clarke deputies would be answering calls of ‘my neighbor’s trash can is blowing on my property’ or ‘my neighbor’s sign is detracting from my property value,’ but we do now,” says Roper. He believes this comes from the expectation of service from the community. “We do our best to answer the call,” he says. The mission has broadened: “Our office handles calls ranging from shots fired to a dog running at large.”

He also sees his role to the citizens in Clarke County and the Commonwealth at large as important because “these are the people that establish the standards that we in law enforcement are held to.”

This leads him to the changes he would like to see while he is in office—closely examining the training standards. “In the climate we are working in today, we need to provide the brave men and women in the field with all of the tools we can,” he says. “I hope to afford this type of change.”

Specifically, he wants to examine the curriculum to ensure its continued relevance. For instance, use of force training “reflects ideas that are not based on science,” Roper says. “I want our people to be confident that we are sending them into the field with the best tools, not with a fear that they are ‘out manned.’” As such, Roper believes the office requires more training, which he thinks is too readily trimmed from the budget. “This is a very short sighted approach,” he says. “This time spent is an investment that we must make.”

Roper’s stance on taking the community’s needs seriously has earned him a local and statewide reputation for excellence. His appointment to the governor’s administration is one example of this recognition, but so is his success in re-election every term, and the general public’s appreciation of his service.

How do you know when it’s time to hang up your driver’s license?
Time To Set Up Homes For Cavity Nesting Birds