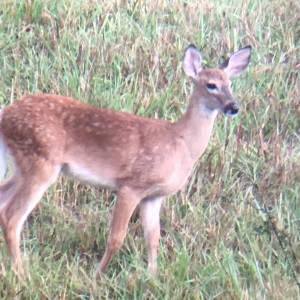 As the Crow Flies

By Doug Pifer
Since the beginning of June, we started seeing a doe and fawn in our fenced upper hayfield again. Often we saw the doe and fawn together in the field. Many times we saw the fawn in there alone. Sometimes we looked out in time to watch the doe jump the fence to join her fawn.
Whenever the doe cleared the fence, the fawn always ran up to her. It would nurse and then run about in circles. But when the doe jumped out, the fawn stayed inside the fence. Would we have another fawn living full-time on our field this summer, too, we wondered? The mother, a small doe, looked and acted very much like the deer that stayed in our hayfield last summer and fall. Having lived inside the paddock from the time she was a fawn until just after the big January snowfall, the little hayfield deer evidently decided this was a safe place to give birth.
This year, in July, a tractor passed close by our fence while cutting hay in the neighboring field. I watched the startled doe run across the field with her equally scared fawn scampering close behind her. The doe sailed over the fence, but the spotted youngster pulled up short, too big to squeeze through the woven wire and unable to jump out.
In early August the man who cut our field saw the fawn run back and forth inside the fence, well away from his tractor. Then the fawn hid in the thick trees growing among some rocks in the middle of the field.
In the meantime, I’ve decided to update my long outdated optical equipment. The deer have been great subjects for me to watch through my new Vortex Viper HD spotting scope. What a difference it has made! I added an attachment to mount my cell phone to the eyepiece so I could take pictures on the phone through the scope.
By sheer accident, I took a series of close-ups of the deer on the “live” phone-camera setting that recorded the flick of a tail, twist of an ear, or turn of a head. In one frame the fawn runs back and forth inside the fence while the doe grazes peacefully on the other side. These first blundering efforts at cell phone photography through a spotting scope were crude at best. Still, they represent moments in nature in a unique way.
As a life-long observer and illustrator of deer, I’m still learning new things about them through the spotting scope. Yesterday after a downpour, several deer came out into the field to graze, I zoomed in on a doe nursing her tail-wagging, late season fawn. The hungry fawn’s head-butting efforts nearly knocked the doe off her feet. She terminated the nursing by deftly stepping over her fawn’s back, leaving it with a “milk mustache.”
Share Clarke!

Education As An Instrument Of Equality
What is a Medicaid Qualified Annuity?