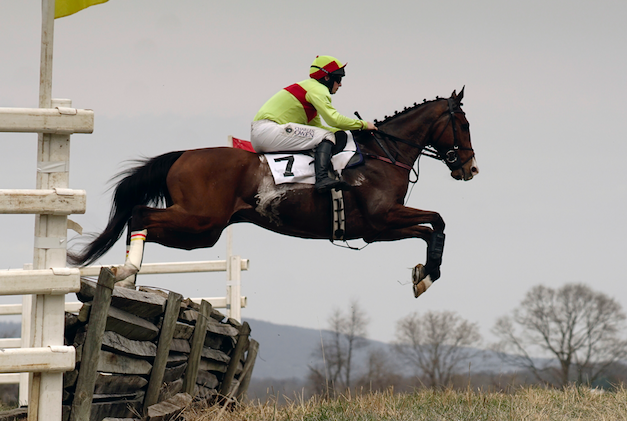 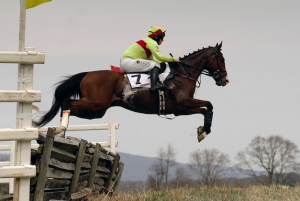 If you thought you had missed the 68th annual running of Blue Ridge Hunt Point-to-Point Races in March, there is good news. The event was postponed due to cold weather causing unfavorable ground conditions and is now taking place rain or shine Sunday, April 23 at noon.

Everyone is invited to come enjoy the races, with an admission price of just $20 per carload. Brian Ferrell, MFH (Master of Foxhounds), chair of the races for the past six years, explains that the beautiful location of Woodley Farm is due to the generosity of Brooke and Michele Middleton. The historic 383 acre property, located at 490 Woodley Lane, two and a half miles south of Berryville, was originally bought by Daniel Sowers in the 1830s from George Washington’s cousin and has been used for fox hunting ever since.

One of the unique things about the property, Ferrell says, is that it has one of the only point-to-point courses in Virginia that allows spectators to see the entire course at one time. Parking is available with the $20 per car admission, but reservations can be made ahead of time to park cars and tailgate on the property’s hill for $150. For details on reservations, call Jenny Irwin at 202-664-4664.

The day will feature 9 or 10 races, depending on the horses available on the day, and will include three different types of races: flat, hurdle jumping and timber fence jumping. All should be exciting to watch with the spectacular view Woodley offers.

“It’s a fun day and a nice local event,” Ferrell says. The Enders and Boyce fire departments provide safety for the event, as well as local vets and a farrier. Many local businesses sponsor the races and Nantucket-Treweryn beagles will be on site for children (and children at heart) to see and play with.

As Norm Fine notes in his history, today’s followers of the Blue Ridge hounds ride over the same hills and fields and along the same twists and turns of the Shenandoah River as did George Washington nearly 300 years ago when he followed the hounds of his employer and friend Thomas, sixth Lord Fairfax.

At 16, Washington had come to Fairfax’s Greenway Court in what is now White Post, to help survey Fairfax’s holdings. The two pursued the native gray fox behind hounds that Fairfax had sent over from England even prior to his arrival.

Fine explains that fox hunting in Virginia flourished privately until the massive changes after the Civil War set the stage for the formation of organized hunts and subscription packs. The period following the war saw a number of Englishmen moving to Virginia, many of whom were fox hunters in their native England. One such Englishman, Archibald Bevan, helped to organize the Blue Ridge Hunt in 1888, and he served as its first Master.

Well over a century later, the Blue Ridge Hunt is going strong and welcomes anyone who wants to enjoy the sport of fox chasing. Although that no doubt requires some experience, none is needed to come out and enjoy what promises to be a wonderful afternoon of point-to-point racing at Woodley Farm. Pack a picnic and bring the family! For more information, call Ferrell at 540-550-7015 or visit www.blueridgehunt