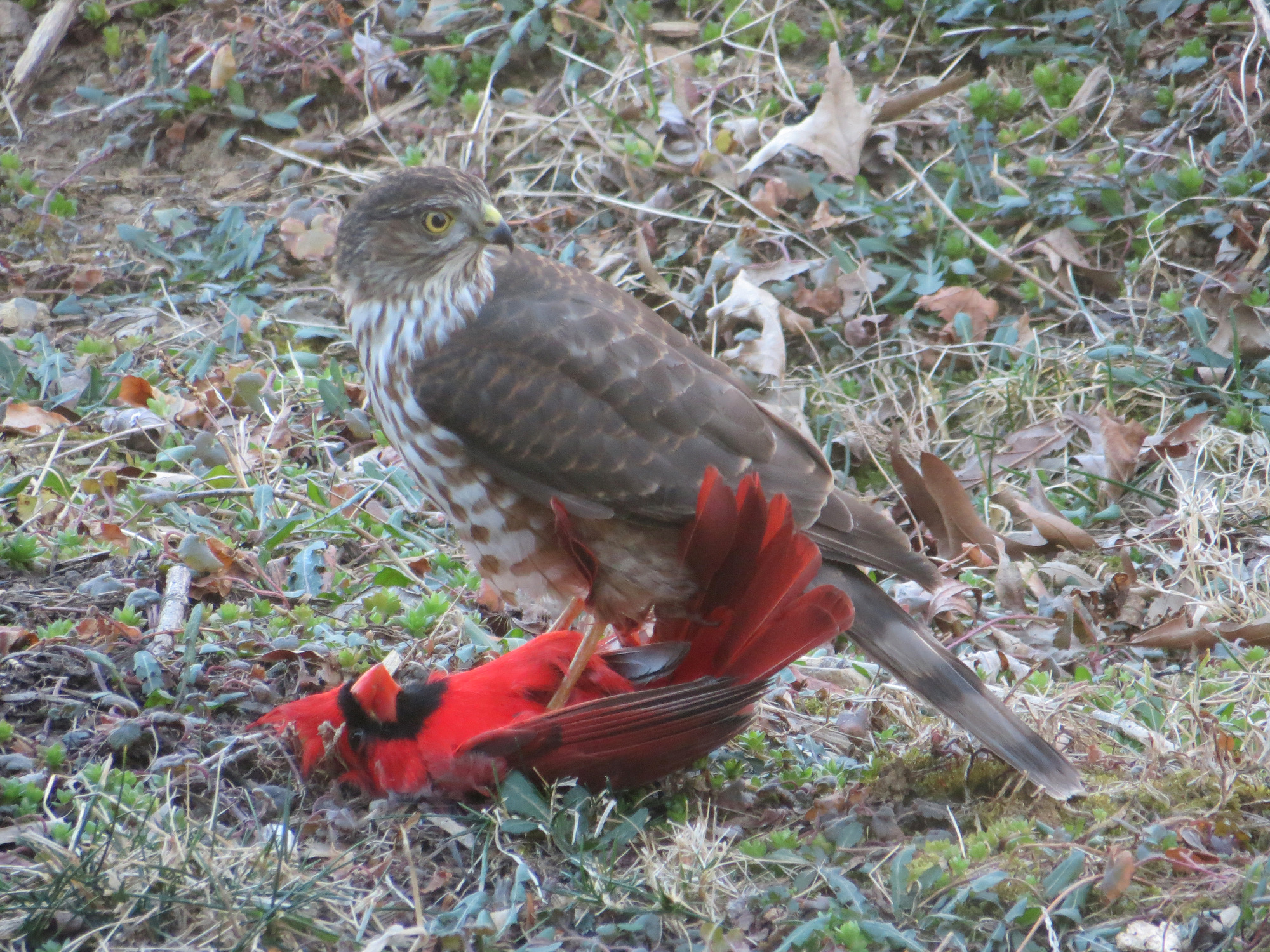 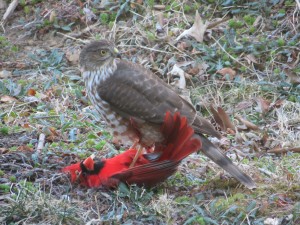 Maintaining a bird feeder close to the house can be fun and educational for kids, a great hobby for older folks and entertaining for everybody. It’s easy to forget it’s not a show but real life, with sometimes unintended consequences.

Lynne Crumpacker was reminded of this as she worked at her computer last week. She has set up several bird feeders about 12 feet outside her windows. That way she can see them while working, with camera and binoculars within reach.

Here are Lynne’s words: “In the corner of my eye I saw a scattering of birds and one large dark form dart towards the house and heard a huge thump. Out of curiosity I stood up and looked out on the ground. Often, a bird will be there, stunned or dead after hitting a window or side of the house. I don’t try to rescue them anymore. If they’re going to live they do it quite well on their own without the stress of me trying to revive them. This time there was this surprise.”

On the ground below the window, a small hawk stood over a motionless male cardinal. Lynne instinctively reached for her camera. She continues:

“At first, he was staring down at the cardinal, giving it the eagle-eye—then he looked around as if planning his next move. I thought he might have been stunned after hitting the side of the house but then I was amazed at how easily he picked the cardinal up and carried it off so fast through the trees that I couldn’t get an in-flight [camera] shot.”

Lynne still managed to snap the accompanying photograph of a young sharp-shinned hawk with vividly-colored prey. Captured cardinals are fighters and inflict real damage with their heavy bills. This one evidently hit hard against the house while fleeing the approaching raptor, offering it an easy meal.

Such high drama can be shocking. One of Lynne’s friends was horrified by the story behind the picture. People tell me they stopped feeding bids after such a thing happened. These feelings are understandable.

For me, the lesson here is nature has no favorites. And, hawks are imminently worth watching.

Such hawks travel a daily beat at high speed, darting bullet-like through clearings, zig-zagging though brushy tangles, or skimming low above the grass. You can bet they pass every bird feeder in the neighborhood. Any songbird within range is the target. Brief pursuit often ends in a tail-chase deep into a brush pile or thicket.

Hawk-awareness enriches my own life.