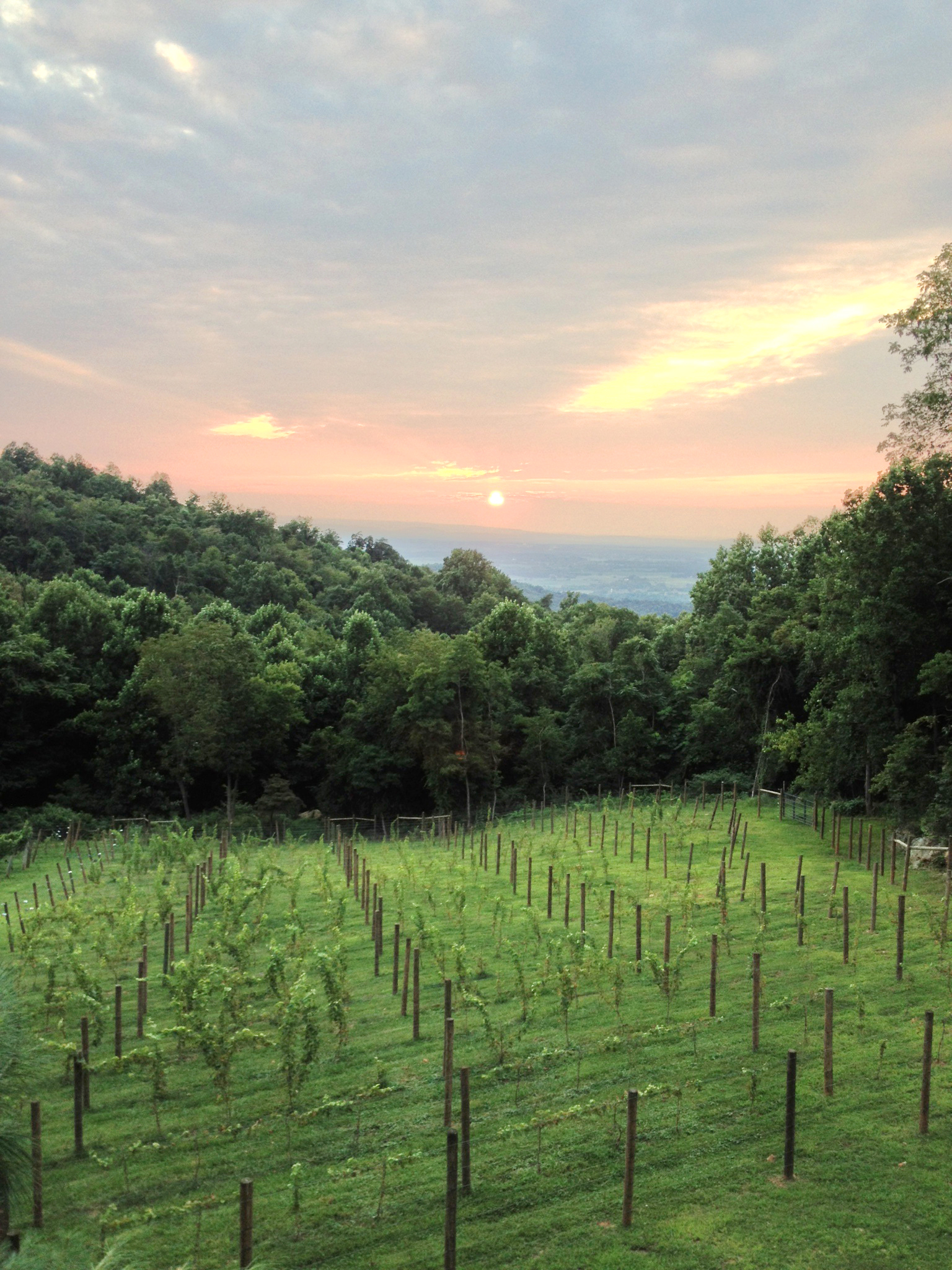 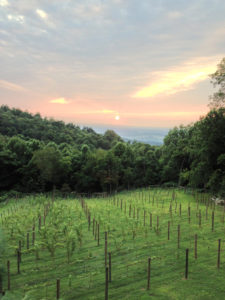 The first thing I noticed was the color, like amber covered in smoked honey, as our glasses of Twin Oaks’ signature Chardonnay danced gleefully across the Great Room to our table by the window overlooking the beautiful mountainside vineyard. Our charming waitress also delivered our baguette and honey-dripped almond baked brie from the amply stocked Light Fare Menu which also includes a pulled-pork barbeque sandwich, home-made chili, meat pies, burritos, sausage, cheeses, chocolates and more.
My wife and I clinked our glasses in “salut” and sniffed the crisp bouquet of the liquid gold. There is just a hint of citrusy fruit, complex and muted, not sweet, and a tastefully restrained remembrance of the oak casks in which all of Twin Oaks’ wines are created. A taste of the nectar confirms what the nostrils already knew. The Chardonnay grape itself is the star. This wine-maker loves wine and knows how to make the wine that she loves.
Donna Evers, owner and hands-on proprietor of Twin Oaks Tavern Winery, has wine-making in her blood that goes back several generations to her family’s hillside vineyard in the Central European country of Croatia. Her grandfather immigrated to America in the early 1900s and the Kobasic family put down solid roots. This firmly-rooted foundation has now flowered into a dream-come-true, the magnificent, must be-seen Twin Oaks Tavern Winery. “There is no place like America,” says the owner. “The opportunities here are endless. If you can do it… you’re on! I’m so grateful to be in a country where nothing can stop you. Go! Go do it! I feel like I have so much to be thankful for.”
Donna Evers built this winery with her own very capable hands. There are three and a half acres of grapes including two full acres of Chardonnay, three quarters of an acre of Cabernet Franc and three quarters of an acre of Merlot. She tells us how she and her late husband planted their first vines in 1999. Those vines yielded only leaves for three years before their first real harvest that produced thirty-five gallons of wine in 2002. By 2015 Twin Oaks was up to full-production and Donna produced 2700 gallons of wine. It is top quality, award-winning wine, made by a master that knows the strengths and weaknesses of the varietals that she planted and also understands the intricacies of the unique local climate of the Western slope of Mount Weather.
We sip our Chardonnay and nibble on our baguette and brie as we sit in the newly renovated Great room that hosts weddings, parties and events. Outside and below our table by the window, on a deck that spans the entire Western side of the Winery’s main building, a guitarist entertains the happy, sun-splashed crowd with well-played classic covers and a clutch of fine originals. Everyone that we encountered was in a friendly, jovial mood. There is a nice, laid-back vibe to the place that starts from the top.
There is always live music on Saturdays and an open mic on Sundays. You might even be lucky enough to catch the owner herself, with a guitar in her hands, singing and picking her way through her set that includes some Creedence Clearwater Revival classics. When the weather is nice the live music is on the deck. When the weather will not cooperate, the music moves inside to the Twin Oak Winery’s brand new Great Room.
The original stone dwelling on the scenic Bluemont
property was constructed in 1893 and was one of the first stone houses in the area. When the train began service to Bluemont in 1900 there was a Real Estate frenzy “like the vicinity had never witnessed” which resulted in a few more houses being built. Around 1910 the owners of the property converted it into a B&B for city folks who took the train from DC out to Bluemont to escape the heat of the city. People stayed for the weekend, the month or sometimes the entire summer at the inn called Twin Oaks Tavern. And the business continued on as an inn all the way up until the 1950s. And then in 1968, the train stopped coming
to Bluemont.
In 1997 there was a catastrophic fire that destroyed the original residence. Donna and Bob Evers bought the property in 1998 with the intention of rebuilding the house and selling it. They loved the results so much, and fell in-love with the gorgeous vista so deeply that they decided to sell their other residence on the mountain and dwell at Twin Oaks. Donna tells us a story:
“That summer, Bob and I were on vacation in Europe. We were riding on a train through Italy and I was dozing and dreaming. I remember waking up- and here it starts sounding like a Bob Dylan song. I looked out the window of the train and beheld the most beautiful landscape of rolling hills and mountains and everywhere were vineyards, as far as the eye could see. I decided then that I had to have a vineyard and after  several months of research and planning we planted grapes on this Twin Oaks property and worked with them and improved our knowledge every year. We built a three-car garage and that eventually became our first tasting room, which we opened in 2009. Since then we’ve added two large additions, one in 2011 and one in 2017.”
In the tasting room at Twin Oaks Tavern Winery you can experience several Gold Medal winners, including the outstanding aforementioned Chardonnay “…apple and pear, an oak center and a long, zesty finish…”. Vidal Blanc “…aromas of melon… creamy honey center…”, and Norton 2015 “… smoke, cedar and blackberry… pairs well with steak…”
This is a beautiful, friendly place. Come on out to Bluemont and enjoy yourself!
Twin Oaks Tavern Winery
18035 Raven Rocks Rd.
Bluemont, VA
540-554-4547
Open Thursday and Monday 12pm–5pm; Friday – Sunday, 12pm-7pm.
Share Clarke!