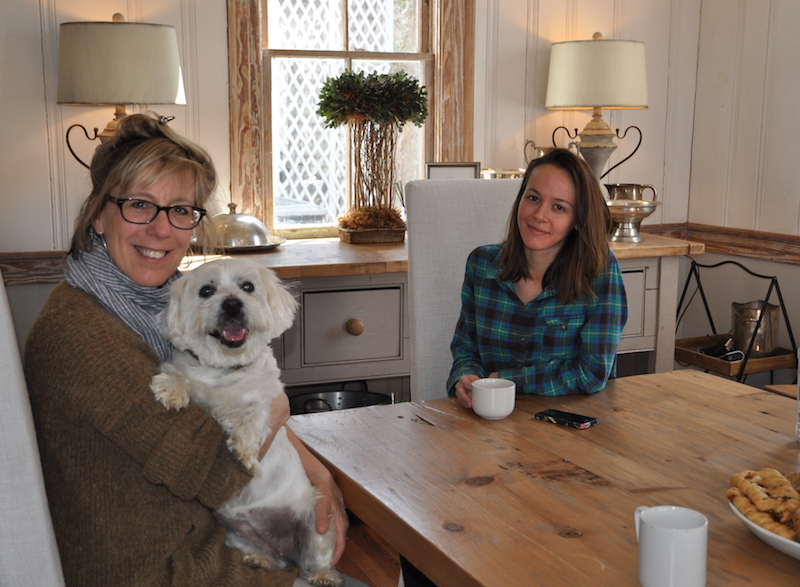 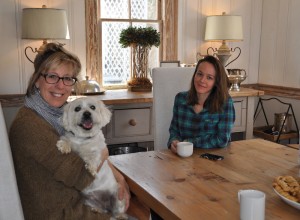 Heading east from Berryville on Route 7, right after crossing the Shenandoah River, turn left and drive north on Parker Lane. This narrow road winds through the woods along the Shenandoah, the river on one side and the western slope of the Blue Ridge on the other, for a mere one and a half miles before ending in front of a gracious white mansion known as The Retreat. Built in 1799 by Thomas Parker, The Retreat was the center of a 1,100 acre estate that remained in Parker family until 1872.  Today, thanks to the efforts of Suzanne Eblen and her husband, Pat, the house once again offers visitors a respite from a busy world as a vacation rental.

“It is shockingly calm here,” Suzanne says about the property. “Coming over the mountain from Loudoun County, I always feel like I’m going away on vacation.”

The house is surrounded by Shenandoah University’s 195-acre River Campus. Site of the Union Army’s staging area and artillery placements during the July 1864 Battle of Cool Spring, the land was developed into a golf course in the 1950s.  In 2013, after the golf course went bankrupt, the Civil War Trust purchased the property and conveyed it to Shenandoah University, ensuring its preservation as open space.

The Eblens purchased the house in January 2014. A girlfriend brought Suzanne to see The Retreat when it went on the market in May 2012, but at that time, the asking price put the property out of her range.

“I kept my eye on it, though,” Suzanne recalls. “A few days before Christmas 2013, I saw online that it had gone to short sale. We made an offer and closed the deal less than a month later.”

The previous owner, Scot Lessler, purchased the property in 2005 and began to restore it, but the scope of work needed – and the economic downturn – proved to be the project’s undoing.

“Honestly, if Scot hadn’t done the heavy lifting on the restoration, I couldn’t have afforded to finish it,” Suzanne says. Lessler replaced the roof, repaired the foundation, installed HVAC ducts, and began stripping centuries of paint and varnish from the floors and woodwork.

The Eblens spent a year completing the house’s restoration. When they purchased it, the house had crumbling walls, no functioning bathrooms and no kitchen at all. Today, the house boasts five bedrooms, plus a sleeping attic that can accommodate four. It is available for whole-house rentals year-round through the Vacation Rentals By Owner website (www.vrbo.com).

Suzanne has furnished the house with a decidedly European flair, a style familiar to fans of her antique store and interior design business, The Old Lucketts Store, in Loudoun County. The subtle, monochromatic palette of the furnishings contributes to the house’s serenity.

She left the woodwork – which legend attributes to Hessian mercenaries placed in the charge of Daniel Morgan after the Revolutionary War – bare, stripped of paint by the previous owner.  The “pickled pine” look fits with the European aesthetic of the furnishings.

“I didn’t want to make it a museum, where people would be afraid to touch things and not feel comfortable,” Suzanne explains. “I want to honor the house’s total history. Leaving the woodwork the way it was when we bought it is part of that history.”

After opening in early 2015, The Retreat at Cool Spring quickly garnered a series of five-star reviews on the VRBO website. Words like “tranquil,” “relaxing,” and “quiet” appear frequently in the reviews, proving that The Retreat is living up to its name.

“When guests arrive, they are on their own,” says Jocelyn Zarcyzinski, The Retreat’s housekeeper. “It’s really lovely to be here, and guests appreciate that.”

The Retreat at Cool Spring is not Suzanne’s only Clarke County venture. This May, she will be bringing her Lucketts Spring Market to the Clarke County Fairgrounds.

Suzanne Eblen opened the Old Lucketts Store in 1996 and started the Spring Market a few years later.  She and her husband moved to Northern Virginia from Los Angeles in 1990. She was amazed by how much less expensive vintage furniture was in Virginia than in California. She began visiting auction houses and estate sales, reselling her purchases at “epic” barn sales on their farm outside Lovettsville.

“I always set a limit on how much I would spend at a sale,” Suzanne says. “It’s easy to get caught up in the bidding and pay too much for an item. I would look at something and ask myself, what would be a good price if I were buying it retail?”

Her vintage furniture and interior design business grew from there, starting with a booth in a Brunswick antique mall and culminating with the purchase of the abandoned general store on Route 15 north of Leesburg that became The Old Lucketts Store.

“We bought the store in March, I had a baby that spring, and we opened in August,” Suzanne remembers with a laugh. Today, The Old Lucketts Store has an international reputation for “vintage hip” furniture and décor.

The Lucketts Spring Market enjoys a similar reputation. Initially held on the grounds of the Lucketts Community Center, the market outgrew that site and has now outgrown its current location on Old Lucketts Store property. Last summer, Suzanne began looking for a new location and knew she had found it as soon as she saw the Clarke County Fairgrounds.

“Everyone in Clarke County has been so welcoming,” Suzanne says about moving the Spring Market to Berryville. “This year’s market is going to be spectacular.”

Over 130 vendors are signed up already and Suzanne is hoping to hit 200. She has a full line up of workshops, live music, food vendor and even a beer garden planned. The Lucketts Spring Market will be May 19, 20 and 21, 2017. All the details are on the website at www.luckettsstore.com.