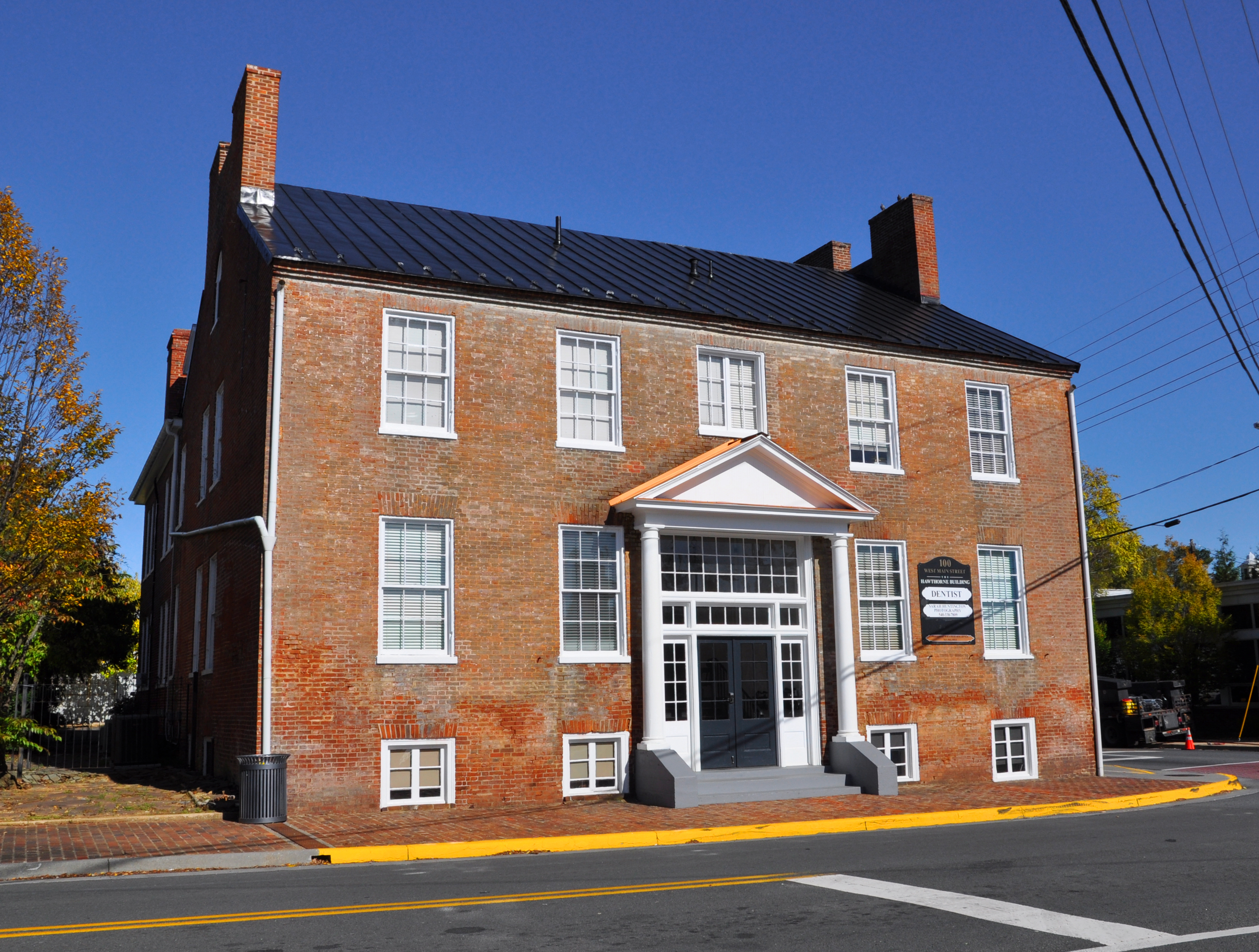 By Betsy Arnette
When Melinda Kramer purchased the Hawthorne Building from the York family in 2006, Mrs. York told her, “You’re buying a very special building because it was built in three centuries.”
The Hawthorne Building sits at the northwest corner of Buckmarsh Street and West Main Street in downtown Berryville. An imposing Federal-style brick building, it was built in three phases. The earliest portion of the building is the rear half that fronts onto Buckmarsh Street. Distinguished from the newer sections by its smaller windows and rubble stone foundation, this section is presumed to have been built around 1795.
According to Mrs. York, the portion of the building that faces West Main Street was built in 1816. Treadwell Smith purchased the building at public auction in 1830 and operated an “ordinary,” or tavern, offering food and lodging to travelers. After Treadwell died in 1872, his son Charles inherited the building. The historic photo (courtesy of the Clarke County Historical Association) was taken around 1900 with members of Charles’ family on the front steps.
In 1887, Dr. Alfred Tucker rented the building and established his medical office and a small hospital there. A Clarke County native who attended medical school in Georgia and New York, Dr. Tucker returned to Berryville after receiving his medical degree. Dr. Tucker died in 1915.
In 1919, Archibald Cummins purchased the building from Charles Smith’s heirs. A year or so later, Cummins built the last addition to the building, on the back and adjacent to the original portion. Sometime before 1958, the front steps of the building were removed and a new interior staircase was built, leading from the street level to the main level of the building.
A mining engineer from Pittsburgh, Archibald and his bride, Anna, had honeymooned in Berryville in 1902, staying at the Crow’s Nest on Church Street. Anna was from Lynchburg and wanted to settle in Virginia. In 1903, Archibald purchased Audley, the plantation that had been the home of Nellie Custis, the adopted granddaughter of George Washington. They lived there until 1921, when Archibald sold Audley to Bernard and Montfort Jones, who turned the estate into a thoroughbred horse breeding and training center. Archibald built Anna a new home, Caryswood, on a hill overlooking the Shenandoah River.
Archibald Cummins was a generous philanthropist. After purchasing the Hawthorne Building in 1919, he hired Clarke County’s first public health nurse and opened a clinic in what then became known as the Cummins Clinic Building. He also brought a doctor up from Norfolk twice a year to perform tonsillectomies on Clarke County children. In those days, removing tonsils was commonly thought to prevent or reduce infection.
Cummins later decided that the county needed a library, so he hired a librarian and established the “Hawthorne Library” in 1929, named after his favorite author, Nathaniel Hawthorne. The library’s books came from his own personal collection.  The Hawthorne Library remained Clarke County’s only public library until the new high school, now Johnson-Williams Middle School, opened in 1954 and the books were transferred there.
Some years earlier, on a trip to Florida, Archibald had met a young man named Frank Tappan, and convinced him to come work for him at Audley. He paid for Frank to attend the University of Virginia for both his bachelor’s degree and his medical degree. After he graduated, Frank and his wife Alice moved into one of the upper-floor apartments of the Hawthorne Building, with Frank’s medical offices on the first floor. When Archibald died in 1933, he willed the building to Tappan. In recognition of Archibald’s kindness, Frank and Alice gave their daughter the middle name of Cummins and called her “Cummie.” When Cummie was growing up, the Tappans owned a home on the mountain, but often lived at the Hawthorne Building during
the winter.
During World War II, the Hawthorne Building served as an informal bus station. According to Cummie, her father never locked the building and often he would arrive in the morning to find that soldiers who were waiting for the bus had taken shelter inside.
In 1953, Dr. Robert “Bob” York joined Dr. Tappan’s practice in the Hawthorne Building. Five years later, Bob and Cummie married. For the first two years of their marriage, the Yorks lived in the Hawthorne Building while they renovated the former McDonald School for Boys at 314 South Church Street. Dr. York retired from practicing medicine in 1994 and, in 2006, the Yorks sold the Hawthorne Building to
Melinda Kramer.
Melinda completed an extensive renovation of the building shortly after buying it. Today, the Hawthorne Building contains four offices and seven apartments. Fully leased, the building is currently for sale. According to realtor Gillian Greenfield, there is an offer pending on the building.
Share Clarke!

Education As An Instrument Of Equality
Margaret Barthel, Berryville Treasure

A Passion for Art and Dachshunds
Scroll to top