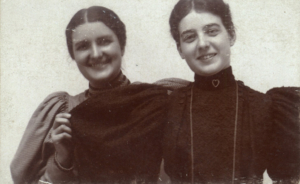 For centuries, history has been the history of men—kings conquerors and thinkers, wars and the rise and fall of nations. But what were the women doing? History seldom documented their lives unless they were royalty or the wives, mothers or mistresses of prominent men. The century from 1800 to 1900 was particularly pivotal for women as they began to be recognized as more than just part of the background scenery.

The Clarke County Historical Association (CCHA) will present a program called
Heroism of our Southern Ladies: A History of Clarke County Women 1800-1900 at Barns of Rose Hill in Berryville at 2:00 p.m. on Sunday, March 1. It will examine the social impact of Clarke County’s women through a century of war and peace.

Nathan Stalvey, Director of CCHA, added that the documented lives of our local women will be tied in with what women were doing around the nation in that time period.

Melanie Garvey, Archivist of CCHA, explains that the program will illustrate how womanhood changed over that century as women started to step out of their traditional social circles and become active politically and socially. The presentation will combine lecture with historical photos and material from the archives. You will learn about the daily lives and struggles of Clarke County women in their own words in diaries and letters as well as from newspaper accounts and other published sources.

The biggest changes to the lives of southern women came, of course, in the period around the time of the Civil War. The army took all of the able-bodied men, leaving women to do their best to fill men’s roles in addition to their traditional domestic duties. Both Northern and Southern armies were foraging and confiscating crops, supplies and farm animals. Battles raged all around them, businesses were deliberately destroyed, inflation was rampant and finances were in chaos. Many women were nursing wounded soldiers, often in their own homes.

The war’s end left thousands of women widowed or with husbands and sons who returned crippled physically and/or mentally. And Emancipation radically changed the lives of those who had depended on the labor of enslaved people.

Ann Page was a member of the controversial American Colonization Society or The Society for the Colonization of Free People of Color of America, founded in 1816 to encourage migration of free-born African-Americans and emancipated slaves to Africa. She and her husband freed many of their own slaves and sent them to new homes in Africa.

Stalvey reports that Adeela Al-Khalili, Vice President of the Josephine School
Community Museum will discuss the changes from the African-American viewpoint. She plans to highlight Josephine Williams and other notable women instrumental in founding Josephine City in the 1870s.

Josephine Williams, formerly an enslaved seamstress at Clermont Farm, arranged for the purchase of 31 one-acre lots from her former mistress, Ellen McCormick, by 16 black families. Williams bought the first two lots of what became a thriving African-American community with businesses, churches and a school, and it was named after her.

“I’m really excited about this program,” says Stalvey. “It will be a unique prospective on the history of Clarke County and a little different from anything we’ve done in the past. I’m eager to work with Josephine School and hear about Ms. Al-Khalili’s research.

Mark your calendar and plan to learn more about the lives and times of Ann Page, Josephine Williams and other courageous and innovative Clarke County women at this sure-to-be-fascinating event.

Print
A D.I.Y. Yoga Invitation for the New Year