Wayside Farm Fun debuts this fall with a 10-acre corn maze, pumpkin patch, hay rides, and much, much more. 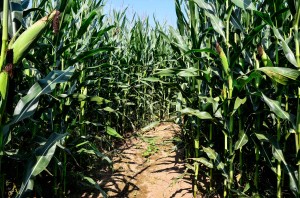 The corn maze at Wayside Farm.

Story and photos by Jennifer Lee

Take a flat, open piece of prime farmland. Put it next to a busy highway. Add a family that’s been farming it for over 50 years. Mix in a young farming entrepreneur, a healthy dose of ambition and imagination, and a lot of prep work. This very recipe has cooked up Wayside Farm Fun, home of that angry bird sitting next to Route 7 and Clarke County’s newest destination for farm and family entertainment.

Wayside Farm Fun opens September 21, providing families a plentitude of activities in a farm setting with 180-degree views of the Blue Ridge Mountains. In addition to a 10-acre corn maze welcoming children and adults, there will be hayrides around the farm, a pick-your-own pumpkin patch, pig races, a combine slide, a pedal tractor track, rubber duck races, a straw pyramid, concessions, and more to enjoy on a weekend fall day. “We hope families will spend four or five hours with us,” said Mark Shenk, who co-owns and operates Wayside Farm. “There is plenty for everyone to do and see.”

Kenneth ‘Peanut’ and Phyllis Shenk bought Wayside Farm in 1960 from Hobson McGee, whose uncle owned Audley Farm at one time, and raised beef cattle, corn, wheat, soybeans, and hay for over 40 years with help from their sons Philip and Mark. After graduating from Virginia Tech, both returned to the family farm and were actively involved in the farm operation until a few years ago. “The cattle paid for our college,” Mark says. Mr. Shenk died in 2004, Mrs. Shenk in 2008, and Philip and Mark pursued work outside the farm. The cattle were sold about ten years ago, but corn, beans, and hay continued to be harvested from the 120-acre farmstead.

Meanwhile, Tyler Wegmeyer and his wife Harriet, who both grew up on dairy farms in northern Michigan and New York, respectively, were cultivating 25 acres near Hamilton in Loudoun County. “I’ve grown pumpkins since I was eight years old, and just always loved it,” Tyler said. “I used to sell them by the truckload back home.” After he and Harriet went out to purchase a couple of pumpkins to carve one autumn—and were floored by how expensive they were—Tyler determined he would grow his own pumpkins again the following year in 2002. Over ten years later, they now raise strawberries, raspberries, blackberries, and three young children, in addition to the pumpkins on their pick-your-own farm. (Their children are not part of the pick-your-own offerings.)

Tyler met Philip Shenk through their involvement with the Virginia Farm Bureau, and they began talking last year about growing pumpkins on Wayside Farm. Then Tyler and his wife went on a cruise, but not the kind where you lie by the pool or buy souvenirs from exotic beachside markets. This was a crash course in all things “corny,” dedicated to creating a destination for families to learn about and enjoy a real farm environment, with some jollies thrown in.

MAiZE, Inc. was founded by a young farmer, Brett Herbst, in Utah in 1996, and has since helped design over 2,000 cornfield mazes around the world and amassed several hundred member farmers who are given the tools and counsel to establish their own mazes. The cruise curriculum included maze layout and design, free kid-friendly activities, marketing, and networking with other corn maze farmers. Also on that cruise were the Wegmeyer’s farmer friends at Dan-D Farms in Knoxville, Iowa.

“You have to have a theme for your maze,” Tyler explains. “When we got back [from the cruise], we started throwing around ideas, most of which revolved around something agricultural. ‘No, no, no,’ my 7-year-old son, Torsten, said. ‘You should do an Angry Birds maze!’ Well, kids know a lot more than adults do a lot of the time, especially about what kids like.” Tyler added that this whole experience allows adults to be big kids and use their imaginations, too.

The Wegmeyers in Virginia and Dan-D Farms in Iowa conspired to link mazes, with the angry bird taking off from Berryville and landing in Knoxville. It is unknown how long that journey will take, but visitors to Wayside Farm Fun will be given free admission to greet the bird upon its arrival and enjoy Dan-D Farms should they find themselves in Knoxville, Iowa this fall. “This is the first inter-state maze I know of that is linked in this way,” Tyler said.

The cornstalks at Wayside are now at least nine feet tall, dense and fat, standing proudly over the ten acres and several miles of winding trails that comprise the maze. There is an “easy” maze phase that takes 20 to 40 minutes to complete and a “hard” phase that takes 40-60 minutes. Along the route, maze walkers will be presented with a variety of questions, either about agriculture or Angry Birds, and must answer correctly to proceed on the right path. There will also be a smart phone app available that can help steer those so inclined, but instincts may prevail over technology on this assignment.

The Shenk brothers will be giving hayrides around the farm, talking about its history and telling other sundry tales. Apple the Goat will be climbing a specially-designed “goatwalk” to reach his prize of treats supplied by spectators below. Four or five piglets will race around a newly-constructed track “that will take them about 45 seconds,” Mark laughed. A pyramid of straw will give youngsters another place to play and burrow. Neighbor farmer Wade Louthan provided his combine to give kids a chance to climb into the tall cab and sit behind the wheel, then slide down an attached slide. And a couple of large galvanized water troughs, two old-fashioned water pumps, and a series of tubing have been turned into a racing stream for rubber ducks.

“We’ve always been thrifty,” Mark says, pointing to the fact that much of the infrastructure and props for the activities have come from the farm or been donated by neighbors and friends. Looking around the barn playground, one can see many examples of adaptive reuse, all of which contribute to the authentic look and feel of the experience. And it’s truly a family affair. Mark’s wife Beth will be greeting visitors to the farm store where a variety of children’s toys related to the maze and farm will be for sale. Philip’s wife Theresa was driving posts from the tractor for the pig racetrack during a recent visit. Tyler’s wife Harriet and their three kids have contributed ideas, inspiration, and plenty of sweat equity. All will be on hand during operating hours, greeting visitors, serving concessions, supervising activities, and making sure everyone is safe and happy. Pizza, barbecue, kettle corn, and soft drinks will be available for purchase.

For those just wanting to find the perfect jack-o-lantern, there are over 20 varieties of pumpkins planted over nine acres to pick from, grown by the Wegmeyers. Pumpkins sell by the pound and no admission fee is required for people just wanting to pick up a pumpkin or three.

So slip on your boots, gather your kids and inner-child spirit, and come out for a full day of fun on the farm.

Wayside Farm Fun, located at 5273 Harry Byrd Highway east of Berryville, opens September 21 and will be open weekends (Friday-Sunday) from 10am to 6pm until November 3. Admission is $10/person; kids 2 and under free. No pets, please.

Time To Set Up Homes For Cavity Nesting Birds