CrossFit for the Esteem-Challenged Self 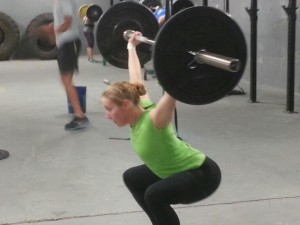 My mother affectionately called me Beau. To my Sicilian Grandmother, I was Marcus Aurelius, the great Roman Emperor. My dad called me Marko, cheering loudly from the stands during Friday night football games. But to the boys from my childhood neighborhood, I was Piggy.

I wasn’t unpopular. Didn’t get picked on. It was just a nickname that spilled out over bowls of chocolate ice cream on a hot summer day. And it stuck. Other boys had nicknames that I secretly envied. Termite was an older kid with a mouthful of braces and powder blue eyes. Simon was my best friend, Greg’s older brother. He got his nickname because of the coke bottle black framed glasses he wore to correct his vision. For some kids, we just used shortened versions of their last names, like ‘Czle’ (pronounced SLEE) or ‘Quillo’ (KEE-O).

I wonder if my life would have taken a different path had my nickname been something cool? Something that didn’t describe the way I saw myself. I didn’t necessarily want to be The Lone Ranger. But, Tonto would have been nice. Heck, anything other than Piggy. Having said that, I would be less-than-honest to diminish the value I’ve found in attaching significance to names and the experiences from which they were born in my conscience.

Just last weekend, my mother was talking to her grandchildren about me—recalling stories of my youth. She said to my oldest son, Owen, “Your daddy was fearless.” I sat across the table listening to her tell stories of me and the thought banging around in my head was, “Nothing could be further from the truth.”

The first time I walked into a CrossFit gym (called a ‘box’), I was most definitely afraid. I’d looked up the local affiliate online, punched the address into my GPS and driven by—twice. Finally, I’d summoned the courage to actually get out of my truck and make the long walk across the parking lot.

Once inside, it was like stepping into another world. Through the fluorescent haze I could see people sprawled out on the floor stretching. Others were chatting casually, perched upon wooden boxes with numbers spray-painted on the sides. Plated weights stacked in rows along the limestone-and-cinderblock shell of the place. Barbells hanging from machine screws fastened into the walls. Gigantic steel scaffold with pull-up rigs and barbell racks rising up from the floor. A massive PA system thundered in the corner, feeding the space with vibrant bass and screeching guitar riffs.

On a whiteboard, someone had scribbled in large block letters “MURPH.” Underneath the name a series of numbers: 100/200/300. I wanted to run from this place. I was about to do just that when a large digital time clock hanging from the rafters beeped loudly, counting down from ten. Nine . . . eight . . .

Most of the next hour is a blur to me now. Lost in my sweat and suffering and uncertainty. Actually 56 minutes, 13 seconds to be exact.  I completed “Murph,” my very first Workout Of the Day (WOD, in CrossFit-speak). And, in the process became a CrossFitter.

Murph is one of a collection of Hero WODs performed by CrossFitters to honor military men and women—those who gave their lives in service. Each workout is in memoriam of an individual and their ultimate sacrifice. The actual workout goes like this: First, you run a mile. Then you complete 100 pull-ups, 200 pushups, and 300 air squats. The repetitions are broken into small sets to make the work manageable—I did sets of 5 pull-ups, 10 pushups, and 15 air squats. Finally, you run another mile to complete the workout.

In the farthest corner of the CrossFit box, I worked through Murph alongside a hulk-of-a-man. His massive arms were decorated with tattoos of screaming eagles and tattered American flags. We shared a water bottle and a broken shard of sidewalk chalk to mark off reps on the concrete slab in between puddles of our own sweat. Pushing each other, without words, and building a friendship.

I see Jeremy Almond now almost every day. We talk about CrossFit and music and fishing and the challenges of raising our kids. He came to CrossFit a year ago in an effort to lose weight. “I was over 300 pounds and tired all the time,” he says. Now, at 36 he’s in the best shape of his life. Jeremy wants to eventually compete regionally in the Masters Division. His workout partner Cait Lucas has similar aspirations.

From outward appearances, they seem an unlikely pair. She is a pharmaceutical sales rep with boundless energy. Cait hops around the CrossFit box with a smile that pulls at the corners of her mouth as she jumps into the arms of anyone nearby. “We’re huggers here,” she says before bouncing off toward her barbell loaded with heavy weighted plates.

“I talk to doctors every day about the benefits of fitness and exercise,” she says. “Diet alone isn’t enough. CrossFit gives me a reference to be better informed.”

Together, Jeremy and Cait form a level of accountability that would be difficult to maintain without each other. “Cait pushes me, especially on days when I don’t want to show up,” Jeremy says. “We don’t want to let the other one down, so we show up—no matter what.”

Most days, you’ll find me at Shenandoah CrossFit in Winchester among the other members as we work together in pursuit of our own definition of fitness. Pushing each other past the limit, both real and imagined.

Lindsey Swaim, a.k.a. Swami, has been with Shenandoah since they opened in a small garage off Braddock Street. “I didn’t even know I was doing CrossFit,” she says. “It was just a couple of guys doing bodyweight exercises and throwing around weights.” While Swami enjoys the physical benefits, she says the best part is the friendships that have formed as the membership has grown. “All of my closest friends are here,” she says. “We work out together, but we also spend time together outside the box.”

Founded in 2000, CrossFit is a strength and conditioning program designed to help people gain broad and general fitness. CrossFit programming concentrates on constantly varied functional movements performed at high intensity to achieve overall physical fitness, so people are prepared for any physical challenge.

Shenandoah CrossFit offers a free week of sessions, so you can try it out before making a commitment. Their class schedule offers a range of times throughout each day, beginning most days at 6am. Membership includes instruction in all the movements and skill workouts by certified coaches. Sean Rider, co-founder and lead instructor says the most rewarding aspect of his job is watching the transformation. “I can only train those that walk through the door,” he said. But, he treats everyone that does the same. “I match their willingness,” he says.

Sure, there are quirky aspects to what some call the CrossFit subculture. They speak a unique language consisting of long acronyms like AMRAP, HSPU, PRs, and OHS scrawled across whiteboards. The workouts have names like Fran or Helen or Filthy Fifty. Many members subscribe to the principles of a Paleolithic Diet, which consists of consuming only unprocessed foods, lean meats, and vegetables with no sugar and very few carbohydrates. The bar to get started is actually rather low.

The programming can be scaled to anyone’s current fitness level or age. And because the movements are functional, they improve your ability to perform in everyday life, whether you’re a competitive athlete, stay-at-home mom, or retiree.

While the physical benefits are easily recognizable, for me there have been emotional benefits. Being afraid to try something new or of what others might think of me has been a constant refrain in my life. CrossFit offers me a platform to face those fears, whether I want to or not.

When I walk into the box each day, I know there will be suffering. I recognize that I will be challenged to do more than is comfortable, more than I could do yesterday. It’s the effort that matters, though. The willingness to push through and try my best, even when I don’t think I can do all the work. Such is the onward slog of a CrossFitter determined to improve: to welcome the suffering, embrace the grind, find the effort to complete one more rep, win the mental war between self doubt and conviction that ultimately signals, “I care about my life.”

Those are principles that I get to carry forward into the real world, where life unfolds without our permission. What I’ve come to recognize is that all of the relationships in my life benefit from the friendships I make and the work I do in that box. I’m more focused and energetic with my children. I have  genuine empathy and an open mind. I am determined and engaged in everyday life. I am getting stronger. And, in the process I seem to be putting a little more distance in the rearview mirror between the man that I see now and the scared little fat kid they called Piggy.

Yoga: A Practice for the Ages—and for all ages
Scroll to top