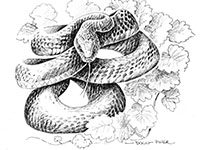 My wife called from the yard, “Come see the big beautiful blacksnake.”

She wouldn’t call me down just to see a snake unless there was something unusual, so I came and met a brief standoff scene. In the yard our two setters stood intently on point on either side of my wife on one side of the fence, and our donkey stood on the other. In the midst of us all, cornered against the fence, was a blacksnake.

If ever a legless creature could stand, this magnificent snake stood, coiled in a defensive spiral. Facing off two bird dogs, two humans and a donkey, any of which could have killed it, the reptile seemed alert but calm. Only its fork-tipped tongue moved, in and out of the closed mouth, even when one of the dogs would warily approach and then retreat.

I snapped a few pictures on my phone and we quickly moved the dogs away so they wouldn’t harass the snake. The snake slowly uncoiled and glided through the grass toward the wooded fence line.

Drama is routine for a predatory animal like a blacksnake. I’ve heard the commotion a tree-climbing snake causes among the resident birds. I’ve watched a barrage of parent birds attack a snake with its jaws clamped around a nestling. One morning a series of loud shrieks led me to a blacksnake holding a baby rabbit in its coils, just as our cat and a wild red fox, coming from different directions, arrived on the scene. And when they aren’t hunting, snakes are continually heckled and mobbed.

In all of these instances, the snakes seem to maintain a zen-like composure while being attacked. Perhaps their reptilian brain instinctively delays a response, or maybe they’ve learned to accept persecution as part of life. A snake’s first reaction upon being seen seems to be to remain motionless. This helps it blend into its surroundings and disappear. Unfortunately, this pause has resulted in too many blacksnakes being killed by humans.

When I was growing up, I seemed to be surrounded by people who, through superstition, fear, or ignorance, killed every snake they met. As I’ve grown older, I’m heartened to encounter more people who respect snakes as useful predators or as fellow creatures who prefer to retreat from humans and bite only in self-defense when surprised or cornered.

Snakes face more dangers now than ever before. Species once common in city backyards are now hard to find, as vacant lots are developed or transformed into buildings or parking lots. Snakes’ nesting and hibernating places are being destroyed by industrial and residential development. Our ever-increasing free roaming dogs and cats kill and eat snakes. Modern farming methods increase the chances of snakes being destroyed by harvesting and mowing equipment. And those that survive all this face a daily threat from getting run down on a highway.

Stop and look when you encounter a snake. Show some respect and let it pass. It may be the last one you’ll ever see.

Hospice Offers Comfort and Acknowledgement
Around Clarke in July/August

To Play A Summer of Softball
Scroll to top