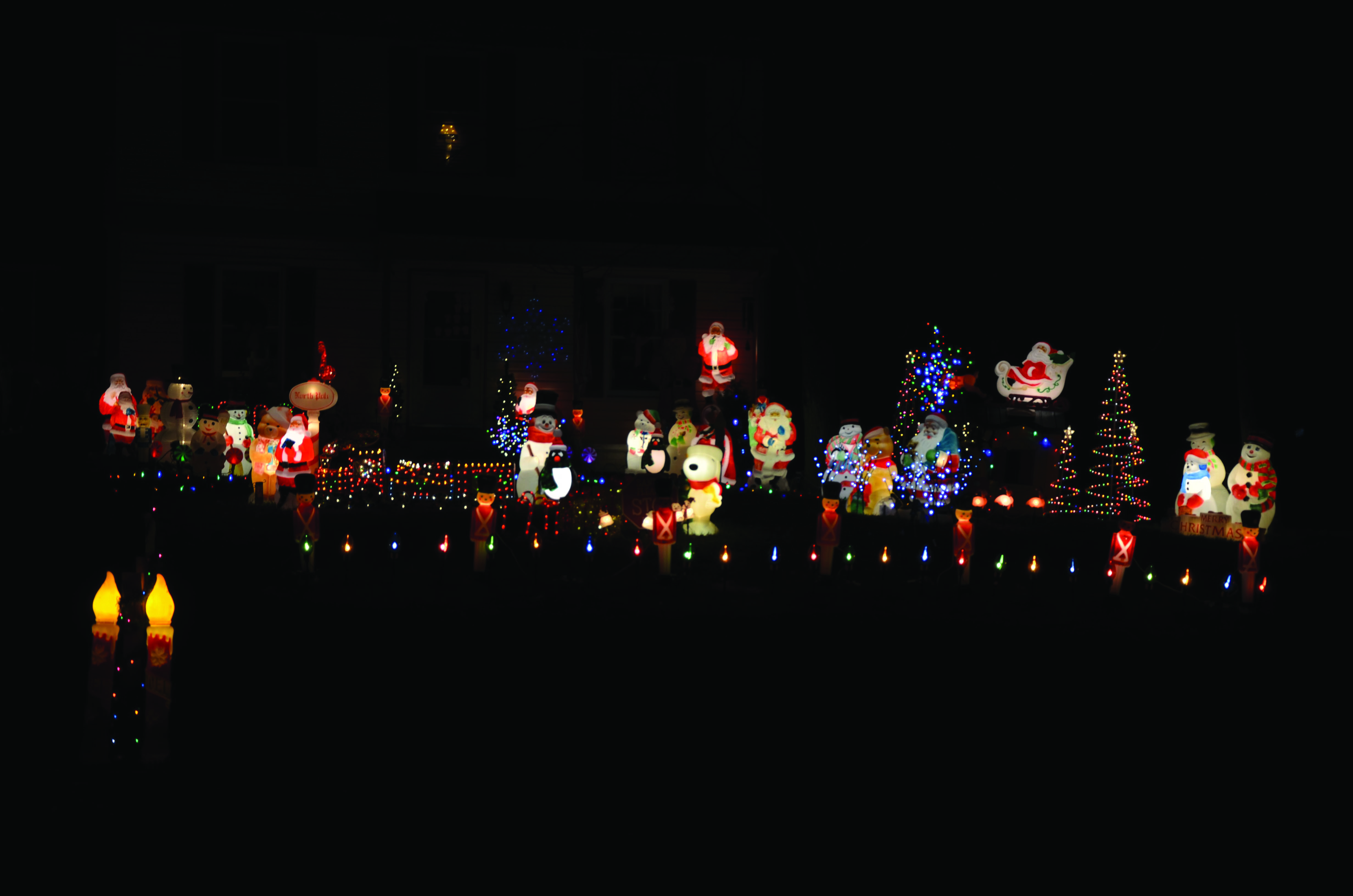 For many people, looking at Christmas lights is an essential part of the holiday season. The tradition has roots in American cultural history and in the local community. Victoria Kidd, a local business owner and Rotarian (and Observer contributor), goes all out in the holiday spirit.

“I knew when I was really little that one day, when I had a house and a yard of my own, that I would use the holiday season to convey to my family, friends, and neighbors that I cared about them by taking time to create a holiday display,” Kidd says. She grew up in a household that did not celebrate Christmas for religious reasons, but every year her mother drove her past a house in her town that had a large light display. “That house had a sign out front that said the light display was a gift to the owner’s friends, family, community, and neighbors. And that was the only gift I received, since we had no holiday traditions. It stayed with me. It became a little representation of community and the need to connect with it.”

The history of light displays is firmly rooted in community development. The first community light display was a deliberate effort by progressive reformers in 1912 New York City to promote cohesiveness in an urban setting. The philanthropists who funded the tree lighting felt the city needed a sense of small-town community interactions among people of different social classes and backgrounds, and a means for advancing Protestant religious homogeneity among the city dwellers. While that festival turned into a secular event and did not meet community-forming goals, it drew a great deal of attention and started the tradition of outdoor illumination that spread across the country over the next several years leading up to a darker period in American history.

The Great Depression fostered an impulse to provide comfort for people during Christmas. According to Brian Murray in “Christmas Lights and Community Building in America,” people tended to use all-blue light displays during the Depression to reflect the “somber mood of a nation in trouble.” Essentially, the displays were a means of noting solidarity, community, and comfort in a period of uncertainty.

Kidd also uses her light display to provide comfort. “As a very active person in this community, and a Rotarian, everything I do also has a charitable component. I use my light display to raise money for causes that are important to me,” she explains. Every year, she holds an event at her home on December 1 to bring the community together to appreciate the lights and to hold a donation drive. This year, she collected toys for local families in need as well as funds in support of the area’s Coats for Kids program, operated by members of the Rotary Club of Winchester. The lights in her yard—and in those throughout the region—are simply the latest installment in the history of this interesting decorating tradition.

Historically, lack of access to electricity and homeownership limited communities’ abilities to have light displays. In 1935, however, the Rural Electrification Administration brought electricity to rural areas and spread the comfort of Christmas lights to more isolated areas.

Then, after World War II, more people were able to purchase homes thanks to the Federal Serviceman’s Readjustment Act, the Veterans Administration, and the Federal Housing Administration. The booming economy also meant middle class people had more disposable income. This coupled with the Cold War era promotion of suburbanization (to avoid desegregation in urban areas) and conformity (to avoid accusations of communism) meant people were more likely to participate in community-wide events that they felt proved their belonging, like the community-sponsored Christmas decoration competitions of the 1950s. Chambers of commerce encouraged citywide participation so the entire communities would be lit. Citizens were incentivized to engage in these events to get to know their neighbors, confirm their place in the neighborhood, and demonstrate their adherence to the capitalist values of the Cold War.

President Dwight D. Eisenhower recognized the importance of light displays in his remarks at the national community Christmas tree lighting ceremony in 1957: “The custom we now observe brings us together for a few minutes this one night…you and I, here, are not alone in a world indifferent and cold. We are part of a numerous company—united in the brotherhood of Christmas.”

The rise in the Christmas display fad continued well into the 1990s, and according to Murray, typified “the non-functional excess of post-war light design.” Light displays still tend to be secular and to emphasize common identity. “The modern American Christmas light tradition is perhaps the most visible way our culture has dealt with an increasingly technological and impersonal world,” Murray says.

The light display in Kidd’s hometown in the 1980s fit squarely into the trend. It was elaborate and carefully considered. “He told a story with how he organized his display,” she recalls. “It was a really special thing that I got to do every year. It was something that I looked forward to, and something that made me feel that one day I could make my own decisions about how I celebrated the holidays. And I could, like this individual in my hometown, use my light display to bring a little cheer to other people.”

Kidd’s collection has been under development for years. She began with lights, as they are accessible and inexpensive. “And then a family member in Ohio gave me my first blow mold,” she says. Blow molds are plastic figures that can be lit from within by incandescent bulbs. Kidd’s first blow mold is her centerpiece, a Santa in his sleigh with reindeer. The relative who gifted her the blow mold gave her two reindeer, which sent her on a search for more to complete the collection. This led her to the realization that communities have formed around blow molds and lighting displays. “There is a group of people connected through Facebook groups, Meet Up groups, webpages, whatever, through the country that collect blow molds and create innovative holiday displays to share with their communities,” she says. “And many of them actually do use their lighting displays, as I do, for charity work.”

Blow molds originated in the mid-1940s. The most famous blow mold is the iconic pink flamingo, designed by Don Featherstone at Union Products. The pink flamingo hit the shelves in 1957 and became a must-have item for suburban housewives everywhere.

He expanded his work into Christmas when Union Products recognized that the market for blow molds was hot amongst suburbanites who wanted to mark their homes with distinction in a way that still suited the Cold War-era conformity. Many people started extensive blow mold collections as the selection became more diverse.

The historical element of the blow molds themselves appeals to Kidd. Because the molds are re-used almost indefinitely, it is possible to have “a Santa in my yard that was made from a mold in the early 1970s, and I can buy that same Santa, made from that same mold, but produced last year.” People who know blow molds can, Kidd says, “go into a thrift store and see one, and know exactly when it was produced based on the style and the paint.”

Kidd appreciates Featherstone’s work, particularly because he signed his molds, so collectors can be sure they have Featherstone originals—choice items in the blow mold world. Kidd has three or four Featherstone pieces. From a design standpoint, she likes Poloron, which has a 50s or 60s style, because they have pieces in all different sizes. She also admires Beco, which have “a very art deco style, versus the campy, tacky Christmas style,” she explains. Finally, she likes Union and Empire, which are accessible to most people because they are affordable and recognizable to collectors.

Blow mold collectors seek their prizes in a variety of places, like thrift stores, yard sales, and flea markets. Kidd has an extensive collection. She keeps 11 blow molds inside her home, and 53 are displayed outside in the Christmas season. Her annual light display requires a great deal of effort. “It takes two people working for about four to six evenings, depending on the complexity of the set-up,” she says.

The collecting community includes a diversity of approaches to light displays. One of Kidd’s online acquaintances took his child’s playhouse and transformed it into a cathedral in his front yard. People repaint their blow molds to repurpose them for different holidays or paint their snowmen’s scarves in their college football colors.

“Some people, particularly when they have too many blow molds, just throw them out in the yard,” Kidd says. “It’s just a huge display of lights.” But Kidd is inspired by her hometown light display hero and wants people who come to see her light display to find a narrative as they look from place to place in her yard. On one side of her house, visitors can see the reindeer stable. In front of the porch is a playhouse with Santa and a reindeer on the roof. “There’s a little collective of snowmen that are all hanging out together and being friends,” she says. “There’s a story wherever you look, and it’s up to the person viewing the display to figure out what the story is, and create their narrative.”

Kidd endeavors to overcome any impersonal element of culture through her light display. “It makes me happy to know that, with just a little bit of action and a little bit of electricity, I get to watch kids cruise by the house, and press their little noses up against the window, and watch their parents take pictures of it,” she says. “And all the while in the background, I know that I have raised money and collected toys for good causes. Their enjoyment is a real gift to me, and I can’t imagine my holiday season without it.”

Barns Of Rose Hill Looking To The Future