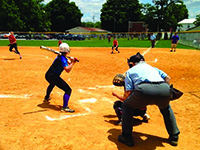 Some teenagers pass their summertime afternoons and weekends lounging about every open chair and bench at the mall. Others congregate in the basement of a particular friend’s house to log vast amounts of time on Xbox and PlayStation game consoles. It may seem that youth could very well be wasted on the young, as picture-perfect days are, arguably, squandered without any perceivable gain. Opposing that tired axiom about youth are the young athletes who spend their summers as members of travel fastpitch softball teams.

Fastpitch softball is widely considered the most competitive form of softball—a game that is similar to, but not the same as, baseball. For many years, it was even an Olympic event. The rules of the game vary slightly from baseball, but with pitching speeds reaching up to 60 or 80 miles per hour, it is equally as intense for many players, spectators, and coaches.

Coaches, in particular, have a unique perspective into the intensity of the game, as they are centrally involved in training players season after season. Team manager and coach, Chuck Siburt, of Inwood, W.Va., manages the Eastern Panhandle Scorchers, a nonprofit area travel team.

The team’s name is new, but the coach has been involved with its previous incarnations for six years, with different players coming and going. This year’s team includes players from Virginia and West Virginia representing Clarke, Warren, and Frederick counties in Virginia, as well as West Virginia’s Eastern Panhandle. Thirteen girls in total have come together and committed to a summer of playing softball, a sport that Siburt believes is equally as compelling as baseball, its more popular “big brother.”

“I feel that softball is much more intense, and even harder, than baseball,” he says. “A softball is definitely harder to hit than a baseball. A batter for baseball is 60 feet, 6 inches from the pitcher. In softball, the batter is 43 feet from the pitcher, and by the time the pitcher strides out and releases the ball, the batter is about 40 feet away.” This difference may seem unimportant until you factor in reaction time. With less distance between batter and pitcher, the batter has less time to evaluate the pitch, make adjustments in stance, swing, and (hopefully) connect with ball.

The thrilling and intense nature of softball play is even more complex for travel teams because the commitment to “travel ball” (as it is sometimes called) requires a player to give up almost every weekend of their summer for in-season play, while also pledging additional off-season Sunday afternoons from the middle of November to the middle of March to practice. The Scorchers compete in nearly 50 games during the tournament season, with three to four games played each Saturday and one to two played each Sunday. “We play more games in a single day than most high school teams play in a week,” Siburt observes.

The potential payoff for that commitment is great. The college softball season overlaps the high school season, creating a challenge for college coaches, according to Siburt. College coaches who are scouting for players to join their teams often frequent travel tournaments where they can watch many players from around the area at once.

He explains, “The travel team experience is becoming a must-have in order to compete at the college level—especially for those hoping to obtain an athletic scholarship.” Essentially, when it comes to competing for the few softball scholarships that exist, travel ball has made high school game play a less desirable means for college coaches to find talent, and the presence of college scouts makes travel ball more competitive.

That level of pressure, coupled with the required commitment of time, may seem daunting, but the coach’s players will tell you that they cannot imagine their summers without travel ball. “Fastpitch softball runs in my blood,” says Robin Blowers of Winchester. Blowers, a rising sophomore at John Handley High School, has three years of softball behind her, but this is her first year playing for a travel team.

In addition to loving the “thrill of running bases, or the excitement of waiting for the pitch,” Blowers believes participation teaches valuable life lessons. She says, “I think that being involved in any sports team helps you learn how to deal with problems that come up within a group. It helps you to understand the value of working together and of cooperation . . . it helps you learn how to encourage others and pick them up when needed.” The belief that participation in travel team play provides valuable experience beyond the athletic variety is not exclusive to Blowers.

“The whole team is pretty much like family,” says team member Katherine “Kat” Ramey of Winchester. Ramey, a recent graduate of John Handley High School, has played softball for 10 years, but has been a member of a travel team for the past three years. She asserts that travel ball has complemented her education with lessons in teamwork and leadership. “I’ve been able to learn how to cooperate with others, and I’ve been able to learn how to adjust for people’s personalities and how others react to situations.”

Morgan Mills of Jefferson County, West Virginia, agrees. “Travel ball is a lot more competitive than school ball, but you get a chance to get really close to your team members.” Mills, a rising senior at Washington High School in Charles Town, has played travel ball for three years. She agrees that participation teaches leadership and cooperation, but she perceives there to be another benefit to travel team involvement.

“A lot of girls my age are staying out late and getting into trouble, but I have to get up early to be ready to go to our games,” she explains. The temptation and pressure to make bad choices tapers when one has committed the summer to team play. “The game has kept me focused. It’s taught me that if you love something, you have to make good decisions and you have to make sacrifices . . . it has been good for me.”

These life lessons, according to Coach Siburt, are an integral part of the program’s philosophy. “The Eastern Panhandle Scorchers was developed for athletes to engage in quality, competitive experiences,” he says. “A competitive athletic experience can produce a good work ethic, enhance social development, and contribute to mental and physical health, while teaching the value of personal responsibility, self-discipline, self-motivation, and teamwork.”

While these leadership experiences are undeniably priceless, they do not come without costs. Tournament fees can range between $490 and $1,400 for a single weekend of play. Players are charged $400 a season to play, but that fee barely covers uniforms, batting helmets, and other expenses. Fundraising efforts, including the solicitation of team sponsorships and outright tax-deductible donations, are essential to the team’s success.

Siburt says, “We have a very young team with three rising seniors this year. We would love to give them the opportunity to play in a college showcase tournament . . . but these are the most expensive tournaments.” The community’s financial support provides the team members with a chance to be noticed by college scouts that attend college showcases, so the team is always fundraising just to gain the opportunity to play.

But the work is worth it, according to Clarke County resident and Scorchers player Destiny Pierce. She has been involved with travel ball for three years, but playing softball for seven years. Her lengthy involvement with softball provides her with a unique perspective and adequate experience from which to describe a travel team player’s life.

“To me, softball is both a team sport and an individual sport,” she says. “I have to work on my own and practice to better myself and to be a better player, but I also have to work within the team. It’s hard work, but it’s also a valuable life experience and learning experience. It’s helped me grow a lot.”

The life of a travel team player is hectic, but youth is fleeting, and these players are steadfast in their belief that every early morning, grueling bus trip, sweat-filled afternoon, and exhausting practice is worth it. To follow the team’s play or to find out how you can help them compete in more tournaments, visit www.facebook.com/EPScorchers18u, or better yet, take a weekend to attend a travel tournament to see firsthand what these young athletes can do with a summer of softball.

This Gathering Is For Everyone