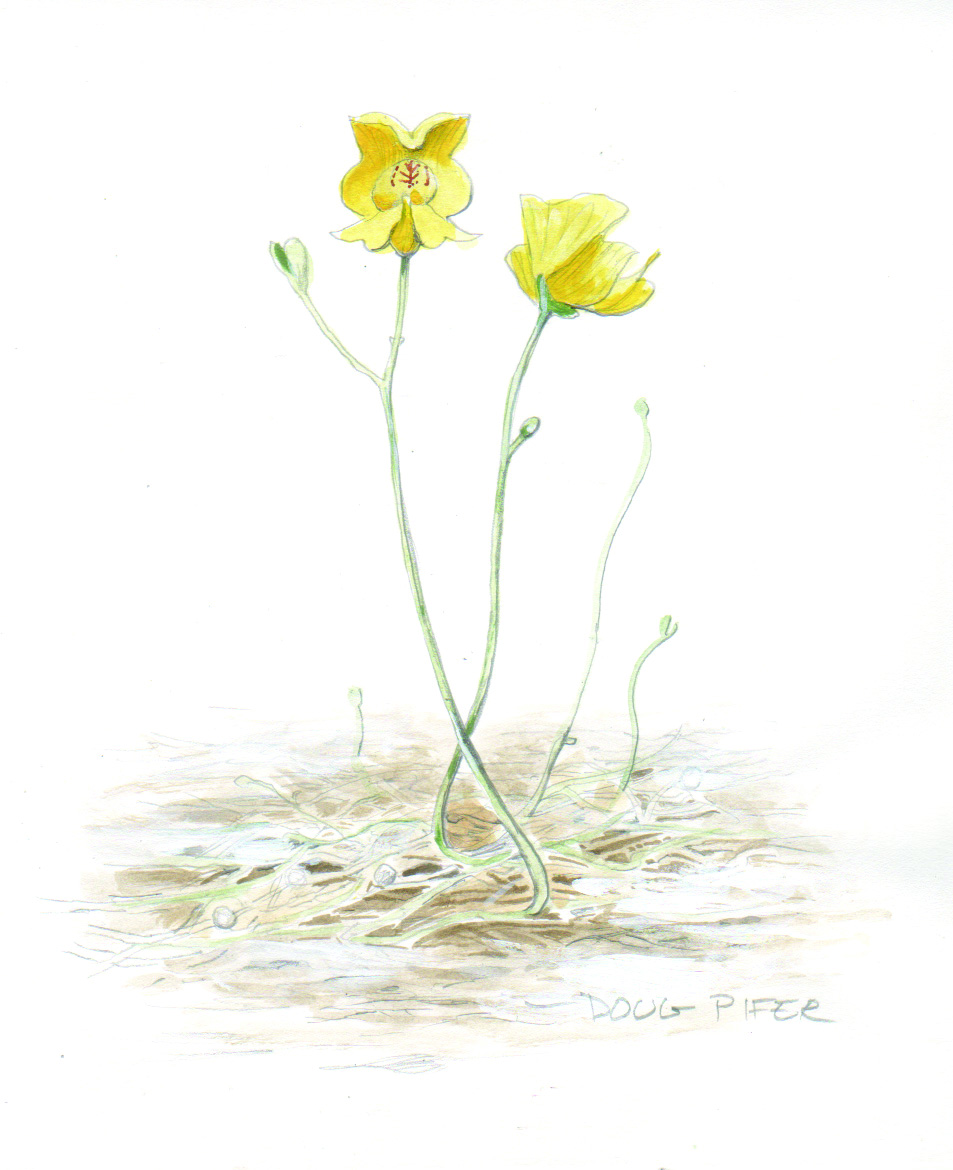 We’ve passed that pond hundreds of times, in a clearing in the woods just next to the road. But last week I discovered something miraculous there.

The pond seemed to be covered with tiny bright yellow flowers the size of buttercups that seemed to glow in the late September sun. I hurried back to investigate.

I parked the car and walked to the pond, carrying with me one of the small Sierra cups we keep in the car for when we need a drink. The pond was shallow and the recent drought made it easy for me to approach the hundreds of tiny flowers. Each was perched on the top of a leafless, wire-like stem poking out of the shallow water.

I scooped up a mat of vegetation containing a flower and several stems that seemed to be in bud, and carried it back to the car in my cup. Examined closely, the delicate flower resembled a small yellow snapdragon or orchid. It had a lower lip with a short spur, upper petals like a hood, and a nose-like structure in the center marked with several fine, rust-colored stripes. There were no leaves, even on the stems in bud.

I had a good idea what this plant might be, and when I got home I double checked it in a few reference books in our home library. Sure enough, they were bladderworts—tiny, aquatic, carnivorous plants. Yes, this delicate little flower was a meat eater.

Bladderworts grow either floating in quiet water or in saturated, wet soil. They’re specially adapted to catch small aquatic invertebrates and microorganisms that live in ponds and boggy areas. This they do using tiny, inflated traps growing from the underwater portions of the plant. Bladderworts don’t have actual roots or leaves, since they get nearly all their nutrition from these specialized traps called “bladders.” The suffix “wort” is an ancient word for plant.

The way these bladders work is so fantastic it’s hard to believe. They are balloon-like structures with a trap door surrounded by fine, hair-like triggers. When a tiny insect or microscopic animal swims up against one of these triggers, the trap door opens, the pressure change inside the bladder forces the tiny animal inside and . . . slurp! The trap door instantly closes and the captured prey is “digested” by special secretions made by the plant.

I couldn’t find any bladders on the plant I brought home until I poked around in the brown mat of wet stems with a pair of tweezers. Then I discovered them: pearly-gray structures the size of those little plant-food beads you can buy at garden centers.

About a dozen bladderworts grow wild in the eastern United States, and I’m not sure which species these were. Most bladderworts have bright yellow flowers that bloom from April through September in shallow ponds and boggy wetlands. Some are native and some are foreign transplants. A few are endangered. But they’re all meat eaters!

On Edge for Spring Gobblers

A Conversation with Dennis Banks

Life and Times in the Hawthorne Building
Too Young to Buy? Workflex Promotes Greater Health and Wellness
Scroll to top