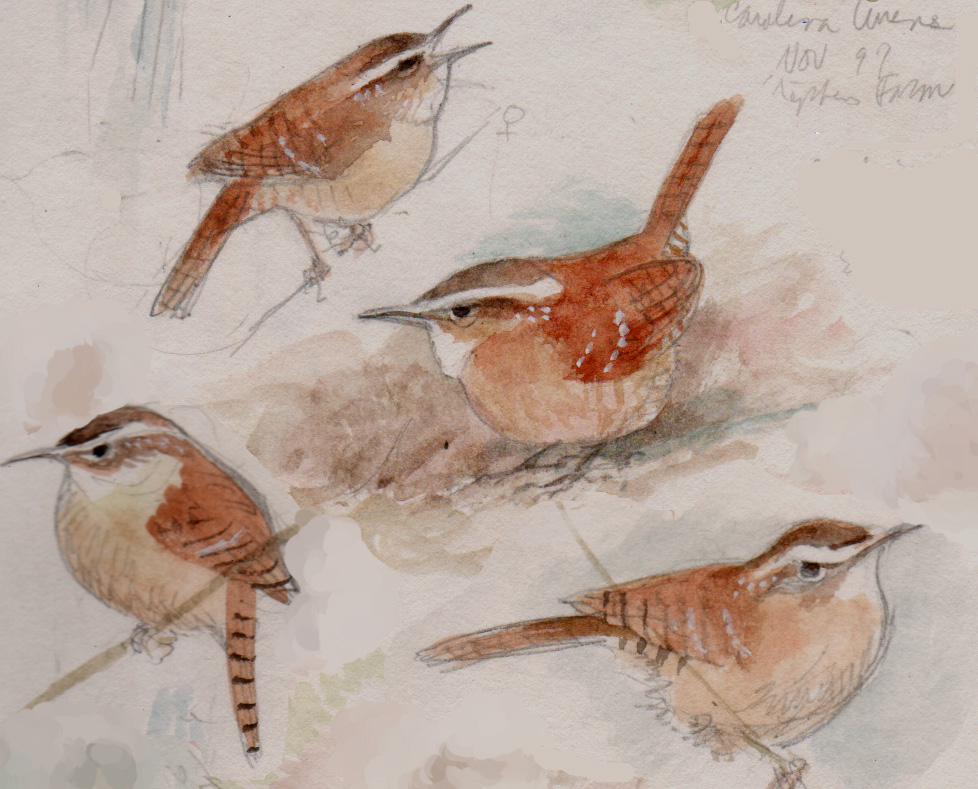 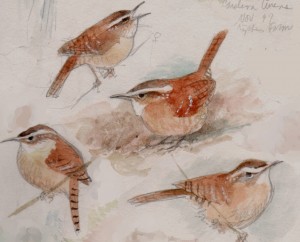 An adventure with a Carolina wren, a kitchen in winter, and bright white pied piper

A Carolina wren got into the kitchen. We found it fluttering against the window pane when we came down for coffee this morning.

My wife, who has quicker reflexes than I, tried to quietly catch the bird so we could let it outside. She had it in her cupped hands but it managed to escape through a small space between two of her fingers and flew to the top of the kitchen cabinet. There it stopped to rest, panting with stress.

When a bird gets into the house, the best way to get it out is to open a door or window and leave the room so the bird can find its way out calmly on its own. But this was a twenty-five degree Sunday morning in January and we didn’t want to lose all the heat in the kitchen. And I didn’t want to stress the bird further by chasing it around.

The way outside was down a set of stairs through the cellar way. And to put as much distance between itself and danger as possible, a bird usually wants to fly up, not down. To solve the problem I went to the studio and found a white, 20 by 30 inch canvas stretched on a wooden frame. By the time I returned to the kitchen the wren had flown to the brick wall above the kitchen door. So far, so good.

Very slowly I opened the door and sneaked back up the stairs while the bird quietly watched from its safe perch.  I continued to move slowly. I picked up the canvas and raised it as high over my head as I could without waving the canvas around. The bird calmly moved down the brick wall towards the door. Continuing to hold the canvas still, I slowly moved down the stairs. The bird hitched its way toward the open space below and quickly flew out, heading towards the woods across the paddock.

The wren was apparently none the worse for its experience other than the loss of a few tail feathers. We found the feathers behind some plants on the window sill. Our cat had evidently pounced on the bird when it came in, knocking the pots in disarray. Cleaning this mess up, I also discovered how the bird had gotten into the house. Between the brick wall and the window frame was a small hole, through which I could see outside. Thanks to that Carolina wren, we’ve discovered part of the heating problem in the kitchen!

Living in old farm houses for many years, my wife and I have had our share of visits by birds. Chimney swifts and starlings enter through the chimney, usually by accident. Wrens come in voluntarily, following their mouse-like tendency to explore dark crevices. Other birds fly in through an open door or window. While we’re honored to have them, we realize they probably don’t want to be there. We help them escape as soon as possible. And in every instance we’ve been able to learn something new about the birds.

Some people believe a bird in the house is a bad omen or are afraid of birds. However you feel about this, move slowly and be aware a bird will panic if it feels trapped! To resolve things with minimal stress just open a door or window, then take yourself, family and pets elsewhere, and relax. The bird will probably find its own way out in a very short time.

Around Clarke in Dec/Jan

The New Career and Technical Education
Scroll to top