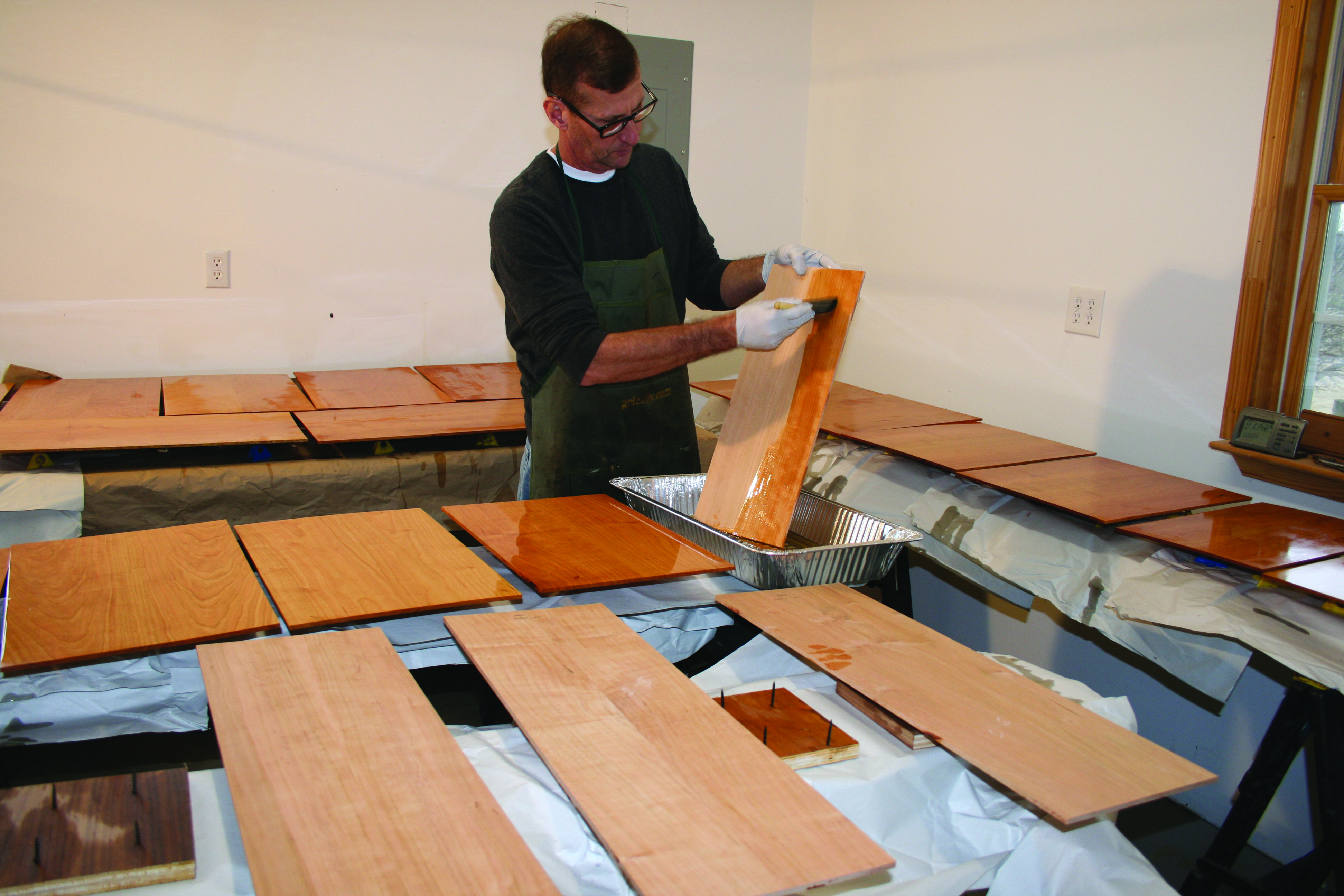 We hear about fresh local food coming from the farm to your table, but have you ever thought about your table coming to you from a local tree? Woodworker Ron Light can show you how it is done. At his home workshop in Boyce, lengths of locally cut logs and stacks of newly milled lumber are waiting to be transformed into hand-made, solid wood tables, chairs and cabinetry.

Light retired in 2011 as a colonel with the U.S. Army Corp of Engineers. After 30 years of rootlessness, he and his wife have made their home in Clarke County, with his longtime hobby of woodworking as a new career.

He has literally put down roots, too, planting his 24 acres with 2,200 hardwood trees, including sugar maple, white and red oak, locust and walnut. He doesn’t expect to be building furniture from the newly-planted trees, since most of them probably will not be ready to harvest in his lifetime. Light sees the trees as an investment for the future of his family and the planet, protecting the soil from erosion, providing a carbon sink, and helping mediate climate change. Trained as an environmental engineer, he is well aware of environmental matters.

The tree planting was no small feat. What had been pasture fields were disked to break up grass mats and destroy habitat of voles (also known as meadow mice) that live in fields and can kill trees by eating the bark at ground level. Then the trees were planted 20 feet apart on a planned grid.

Each tree was planted by hand, with eight workers camping out on the property and planting steadily for two days. Every seedling is enclosed in a shelter tube held in place by a metal stake that had to be driven in by hand. Light noted that the stakes are on the north side of each seedling so that the shelter will never shadow the growing tree as the position of the sun changes.

Much of the wood Light uses for furniture is obtained locally from people with fallen trees or who want trees removed from their property for various reasons. He does not charge for removing trees of the size required for his use.

“If it’s not near a structure or a power line, we fell it,” he said.

In order to be used for lumber, a log must have a diameter of at least 12 inches. That is essential because a log has to be trimmed on four sides to provide a central square that can be milled into eight-inch boards. The trimmings are considered waste and would generally be discarded. Ever mindful of his environmental footprint, Light uses scraps for fence boards or as firewood in his own home.

The logs are cut into eight-foot-six-inch lengths because, he explained, most furniture is less than eight feet high or long. They are then milled into boards that must be dried.

Commercial lumber is dried in kilns to cook out the water, a process that takes about a week. Light air-dries his lumber, which takes a year for every inch of thickness. Stacks of dated boards in various stages of drying fill his drying shed. Dividers separate each board from its neighbors in the stack to allow air flow and prevent bending.

Over the course of a year, all lumber oxidizes to a gray color. When it is ready to be used, it is planed off to make it smooth and restore its color. Boards are milled down to 3/4 inch to get them flat.

“It takes lots of effort to get boards flat and usable,” says Light.

Light’s specialty is solid wood Colonial furniture, but he says he will do anything that a client requests. He notes that the public’s taste in furniture changes over the years, but he reports that he likes Colonial best because he thinks it is timeless. He particularly likes the curved legs of this style. He pointed out a table with “spoon feet” and said that no other woodworker in the area makes them.

Several Windsor pieces are on display in his showroom. He explained that they are made of three different kinds of wood. The spindles and legs are made from maple for strength; the back and arm rests from red oak because it can be bent; and the seat from poplar or pine because it is easy to shape.

Light does a few shows per year and is presently working from orders. He enjoys working at his own pace so that he can continue to enjoy his work without being overwhelmed.

Light’s friend Russell “Rusty” Sears, a fellow retired colonel from the Corp of Engineers, also settled in the area, and they have logged trees together since 2011. Until this year, Light had to haul his logs off premises to a sawyer to be milled. Sears, who operates Red Jack Farm and Mill, bought a portable sawmill, and Light was his first customer. The mill is trailer-mounted; Light describes it as “about the size of a bass boat.” All of the sawdust generated goes to Sears’ farm for bedding for his organically-raised chickens and turkeys.

For a look at Light’s work and more information, visit lighthousewoodworking.com.

To Play A Summer of Softball
Becoming a Montessori Mom