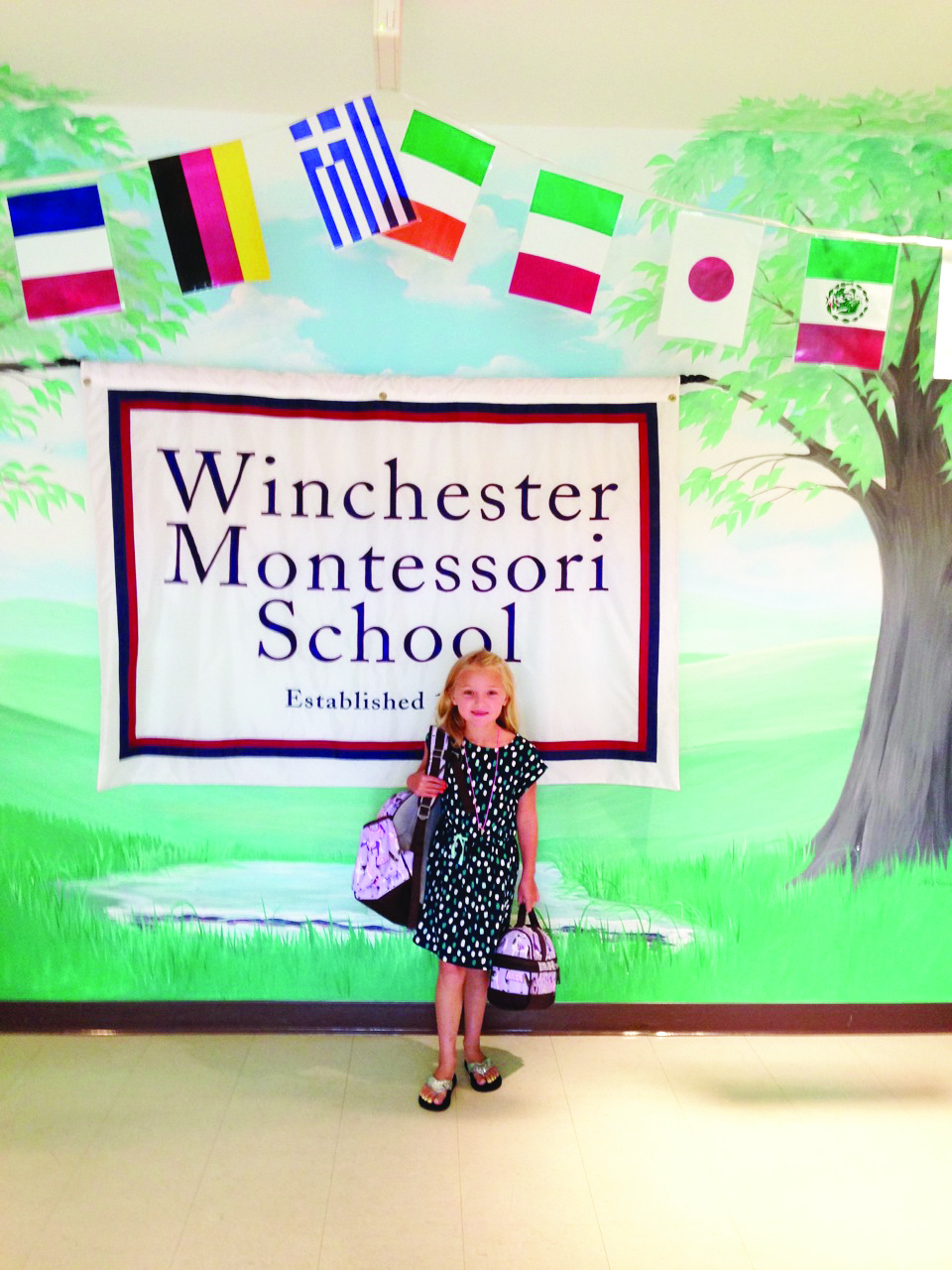 It’s morning, and Berryville resident Kim Lynch is getting her daughter Allie ready for school. Much of their morning will be like that of  other Clarke County families, but they will end up at a school unlike any other in the area. Allie is a student at Winchester Montessori School (WMS) just over the county line on Parkins Mill Road. It’s a school that operates by applying the Montessori Approach to learning, and it has been doing so since 1977.

The Montessori method is often misunderstood, explains administrator Jennifer Sheehy. “Montessori is an approach to education that was developed at the beginning of the 20th century, but it’s still very relevant today. It utilizes the natural learning style of children, and allows students to be active participants in choosing their work in a specifically designed classroom environment.”

That environment—termed as the “prepared environment” in Montessori circles—is designed to provide the child freedom within a definite structure. “The child is allowed to choose work, but is not free not to choose,” Sheehy explains to dispel the myth that there is no structure to a Montessori student’s day. “The teacher is always a few steps away, monitoring the student and encouraging them to explore learning in a way that is natural for their inquisitive selves.”

Those choices occur within the context of the five basic areas of the prepared environment offered to them. These areas include practical life, sensorial, language, math, and cultural activities. The practical life area, for example, includes materials that allow the child to become independent and responsible for himself in the surrounding environment. (Activities in this area include dressing skills and other self-care tasks.) By contrast, the sensorial area helps students create order internally while making sense of the impressions he or she receives. (Accordingly, the student will work extensively with color, pitch, and dimension.)

Every detail of the environment at the WMS, and other Montessori schools across the country, is specifically designed to capitalize on the natural way children learn. It’s the way the Montessori philosophy—which we have only briefly introduced here, as there is much more to it—focuses on the student that attracted Lynch to the school.

“My husband and I researched many learning methods and schools before choosing WMS,” she says. “We wanted an educational environment that would deliver high standards of learning while, at the same time, be kind and loving to our daughter. We wanted a school that would impart the love of learning upon Allie, so that education was something she valued for a lifetime. And we wanted a school that partnered with us in helping to instill values, kindness, and empathy for those around her, as well as a knowledge and respect for the world we live in. We were fortunate enough to find that in Winchester Montessori School.”

One thing many Montessori parents like Lynch will tell you is that their children enjoy going to school. Such was the case with Sheehy’s children, and that is what got her started on a path that would eventually change the course of her career. “My kids were members of the first class when the doors opened in 1977,” she explains. “My daughter was only two, and there were only eight kids in the class that first year. I remember that she would wake up each day asking, ‘Is today a school day.’ That really made me realize that there was something special here. By the end of that first year, I wanted to learn more and wanted to share that ‘something special’ with other parents and their kids.”

The school’s founder, Mary Whitesell Horton, operated the school out of a classroom rented from Christ Episcopal Church those first few years, but increases in enrollment would force the school to seek a more suitable location in 1981. It would subsequently move to two other locations (on Weems Lane and later on Henry Avenue) before growing to a point that necessitated a truly dedicated space.

With a waiting list of over 30 children of preschool age in 1999, the time had come to think about moving to a purpose-built location. In October of 2003, WMS opened the facility at West Parkins Mill Road. The school can accommodate 125 students, although enrollment numbers vary each year. WMS deploys an instructional method that includes mixed age, three-year programs, which is designed to encourage cyclical commitment, as students are building on the skills and knowledge gained in the previous year. Older students are encouraged to assist the younger students, fostering an ability to cooperate, as well as the ability to teach/train (in the case of the older students) and the ability to learn/listen (in the case of the younger students).

“When you are able to teach something,” Sheehy says, “you really, really know it. Furthermore, the younger student learns that if you don’t understand something or if you do not have the skills to accomplish something, you should seek the input of someone who does . . . It’s really a clever means of helping kids learn to work out problems, get excited about learning from others, and use their natural curiosity to fuel learning.”

Lynch believes this foundational element of WMS’s teaching methodology has been invaluable to her daughter. “We credit WMS in helping us to impart important, fundamental knowledge and social skill sets upon our daughter,” she relays. “Allie is able to interact with concepts and ideas versus simply memorizing facts. The education model and delivery of this model, has taught Allie to think for herself and to imagine a new way to do something. Allie learns for herself, not just because she is told to do so. She is imaginative and logical, all at the same time!”

Perhaps the biggest value Lynch has seen is in the advanced life skills and confidence her daughter demonstrated even from her earliest involvement with the Montessori classroom. “WMS has helped prepare Allie for everyday life, teaching her practical skills and giving her purpose in achieving those skills. She is able to contribute to her class, her family, and the world. At three years old, Allie was able to set the table by herself, dress herself, and interact with people of all ages. Today, at age seven, she is articulate, well versed, and we are often told that Allie is special. We agree!”

Seeing the growth of each student, including Allie, is very meaningful to Sheehy and the rest of the staff. Perhaps her commitment to that individual growth is best demonstrated by the answer she gives when people ask her about what the future holds for the school. “I would love to see the classes full all the time,” she says, “but not just because of the business considerations associated with running a school. Montessori has so much to offer every child. When you have worked in the Montessori classroom for as long as I have, you see it in each student. The student is the entire focus of the learning environment. It’s about learning for life and learning for personal achievement. That’s really something special to be a part of.”

To learn more about the Winchester Montessori School (including offered before- and after-school care), visit www.winchestermontessori.com or call 540-667-1184. Sheehy, along with numerous Montessori parents whose children have been a part of the school’s classes throughout its nearly 40 years in operation, will be happy to help you see if the Montessori approach to education is right for your family.

From the Tree to Your Table
Scroll to top