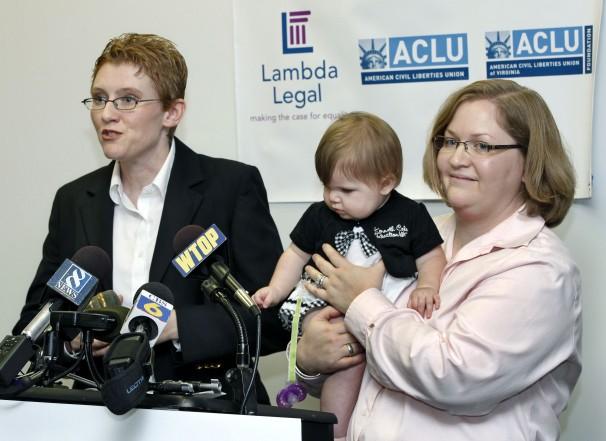 Every July offers us another opportunity to reflect on our individual liberties and freedoms. After all, on the fourth of the month we celebrate the adoption of the Declaration of Independence and remember that our nation’s ideology of freedom was born of revolutionary acts. While the holiday is often most associated with fireworks, family barbecues, and main street parades, it’s a day that is about much more than that, and this year it feels particularly meaningful to me.

As we rip June from the wall calendar, many of us will stop (as I will) to reflect on how the freedom to marry, granted by the Supreme Court’s decision on June 26, makes the upcoming month of patriotic fervor seem even more appropriate. As a plaintiff involved in the litigation that brought marriage equality to Virginia, it’s a particularly meaningful month to me. It’s the first full month during which I will travel without driving through or to a state where my marriage remains unrecognized.

My wife and I were married in 2011. We’d been together for seven years at the time, but marriage had seemed unattainable, despite the slowly increasing number of states allowing it. Eight years in is a make-or-break mark for many relationships. For us, it was time to reflect on our partnership, our careers, our academic pursuits, and the time we have left together. Our discussions covered a wide range of topics, but we came to the conclusion that what was missing in our lives was not related to our career or academic successes. We concluded that it was time to start a family.

Christy and I both come from conservative backgrounds. We were raised to believe that if you wanted to start a family, you needed to be married. Thus, we stood before friends and family in a little church in Washington D.C., recited our vows, and retired to the church’s office to sign the paperwork that would render us legally married, or at least legally married in the nation’s capital. The following year, Christy gave birth to our beautiful daughter, Lydia.

And that’s when the issue of marriage equality really started to get under my skin. I was barred from being listed on my child’s birth certificate, barred from adopting her subsequently, and otherwise consigned to be nothing more than a “co-custodian” under the laws that were in place at that time. I was a legal stranger to the child I cared for while Christy was at work. I was her mommy—but not really. I was her caregiver—but unable to make emergency healthcare decisions for her. My relationship, which felt so solid and real to me, existed in a murky deep-water byway of legally sanctioned discrimination.

Aside from the implications that the state’s ban on marriage equality had for Lydia’s relationship with me, there were impactful implications for the relationship I had with my partner of now eleven years. Christy, a veteran, could not sign a VA home loan with me, barring her from the benefits her military service afforded her. Each year, we paid hundreds more in taxes because we were not able to file jointly. We had to have complicated and unnecessary conversations with doctors, insurance offices, and other professionals serving our family. When at work in D.C., Christy was considered married with a family. When she crossed the border into Virginia, she was considered a single mother. The implications of the state’s ban on marriage equality echoed through every part of our lives.

More importantly, the ban allowed and encouraged others to see us as “less than.” To see our family as “less than.” When the law says you are second-class citizens, people treat you like second-class citizens. When we’d finally had enough, we asked the ACLU of VA and Lambda Legal to represent us in post-Windsor litigation to challenge the laws that left our family unprotected. Once filed, our lives became indescribably public. While we mostly were applauded for our actions, some people found our efforts as a reason to reject or ridicule us. I had people refuse to sit next to me at certain community functions. Others would publicly make known their disgust through hate-filled words and actions. They jeered as we left the courthouse and posted threatening commentary on social media sites.

These reactions were not unfamiliar to me. After all, I started openly talking about my sexuality in 1998, just after Matthew Shepard, a twenty-two year old student at the University of Wyoming, was beaten, tortured, and left to die. Shepard’s sexual orientation was, by almost all accounts, a significant factor in how his murderers treated him. His death coincided with a period of my life where I was struggling to determine the extent to which I would live authentically, and in the end, I decided that I would no longer lie by omission or try to live as a person I wasn’t.

Coming out was difficult. In the mid 90s, being a member of the LGBT community was difficult. I was subjected to far worse discrimination and hate than (thankfully) most people experience in their lives. I was denied promotions and fair treatment at work. I was subjected to violence, up to and including the threat of rape. I was spit on by strangers, abandoned by family, and rejected by friends. But those experiences have never deterred me, because I know the advances, and acceptance, we’ve seen in the past ten years is fueled by a power much greater than hate.

I know that love, the foundation of every faith and every action worth doing, was and is the fuel of the LGBT rights movement. In particular, love is the fuel that has caused the wildfire of marriage equality acceptance to burn across this country in a matter of years equivalent to a speck of time for this planet. Yes, love fuels our revolutionary acts.

And I think the past June holds a lesson for us and for anyone who will listen. It’s a lesson about that love. Love is revolutionary. If we love each other, from the moment we wake to the moment we go to bed, we are revolutionaries. If we find outrage in discrimination, in actions that subjugate people and separate them, or in actions that offer violence to another because of their race, gender or gender expression, religion, nationality, or sexuality, we can and should use that revolutionary act to fuel a work greater than ourselves, greater than our lives.

Revolutionary acts have secured marriage, but we cannot abandon our work toward justice, equality, and peace yet. There are still people being fired or being refused housing for being gay right here in America. Globally, LGBT people live in fear for their lives. Using the hashtag #lovewins, the trending celebratory hashtag used to mark June’s historic Supreme Court decision, ISIS made their response to marriage equality by throwing four gay men off a rooftop and tweeting about their deaths. Every year hundreds of transgender individuals are murdered across the globe, and that number includes numerous U.S. citizens.

Outside of the LGBT rights movement, corporations are destroying our environment—selling our future for immediate profit. The new Jim Crow is a system of incarcerating a disproportionate number of African Americans for longer periods of time and a secondary system of making it nearly impossible for them to regain the right to vote and participate in the democratic process after being released. People are being gunned down while worshipping and churches are again burning in America.

Love gets us to the finish line of any fight, and in June, we’ve certainly learned that together, if we fuel our revolution with love, we can fight and we can win.

16 Things I would want, if I got Dementia

How do you know when it’s time to hang up your driver’s license?
Magic Down By The River

A Lot of Land
Scroll to top