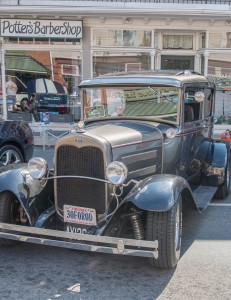 On Saturday, August 26th, over 200 cars rolled into Berryville to enjoy Berryville Main Streets first annual Summer’s End Cruise In. There were specials all over town for lunch and coupons for retail businesses that stayed open late for the event.

Mitzie Myers, owner of Jane’s Lunch said, “I have never seen so many people in my restaurant and downtown enjoying themselves.” Many folks also commented on how great the music was, provided by D.J Bret Fuller, owner of Big Daddy’s Automotive. Berryville Main Street would like to thank the many businesses in town that helped to sponsor the event, especially Bank of Clarke County, Blossman Gas and Trip’s
Auto Sales.

Along with business sponsorships, local police officers and a dedicated team of volunteers dove in and helped springboard this first time event. One name in particular needs to mentioned: Mary Liz McCauley who has set up many Cruise Ins and car shows. A Berryville resident who works for the Bank of Clarke County, Mary Liz jumped in with both feet at the first phone call and showed us how it’s done!

We also had Peoples Choice Awards for first, second, and third place prizes for the most popular car. First place went to the owners of Family Run Trash Service who had a Shelby Mustang named Jack Pot.

Great food, toe tapping music, and of course pristine classic and antique cars were a winning formula for a great day in downtown Berryville. Thanks to all who came, and if you missed it, see you next year for Berryville Main Streets, second annual Summer’s End
Cruise In!

Time for the Clarke County Studio Tour
Scroll to top