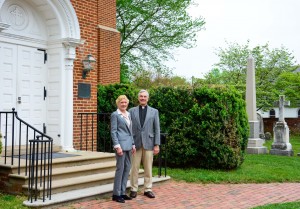 At the conclusion of Berryville’s ecumenical Good Friday service, with a congregation from a number of churches present, the host pastor regretfully announced that Berryville will be losing the Rev. Dwight L. Brown of the Clarke County Parish of the Episcopal Church. Dwight with his wife Catherine will be moving to Moscow, Idaho, her hometown, when he leaves the full-time ministry for whatever adventures semi-retirement will bring. The three churches they have served — Grace Episcopal, St. Mary’s, and Wickliffe, all historic contributors to the spiritual and cultural life of Clarke County — have relied on the Browns for 32 years for leadership in a wide variety of community services.

The Browns came to this parish in 1984. Dwight, a New Englander, had graduated from Trinity College in 1976 and worked in sales and as a hospital chaplain for two years in Idaho, where he met Catherine. At Virginia Theological Seminary he earned a Master of Divinity degree in 1981, followed promptly by his ordination and their marriage. He served as an assistant priest for three years at Trinity Episcopal Church in Arlington, where their son Timothy was born.

By 1984, with his academic and practical preparation complete and with Cathy by his side, Dwight was ready to take the reins of his own congregation for this thirty-two year ride. In that time he has buried and married, baptized, counseled, confirmed, and shared the joys and sorrows of generations of Clarke County families. His daughter Elizabeth was born here, and both children attended Berryville schools. Today Timothy is a consultant with a firm in Austin, Texas, now on assignment with Boeing in Seattle, and Elizabeth teaches scuba diving in Hawaii, where her parents hope to join her when Idaho winters get too hard and long.

On arrival in Berryville, Dwight inherited the care of an 1857 building, housing a congregation established in 1832. His predecessors had added a Sunday School chapel in 1902. Around that time the diocese established St. Mary’s as a mission church to encourage black congregants to stay in the Episcopal Church.

In the 1960s the diocese ended its mission relationship with St. Mary’s, expecting that the congregations would integrate. However, both churches have continued side by side, sharing Father Dwight’s ministry for weekly worship.
He also holds the service for an annual homecoming celebration for Wickliffe, a chapel that ceased having weekly services in 1918. The Grace Church Sunday School building gradually grew modest additions until, by 2002, Father Dwight’s worshiping families and program had grown to need a greatly expanded home. They succeeded in building the existing parish hall and office wing with a roomy parking area — space for more than Robert E. Lee’s Traveler, who was hitched to the post on the Church Street side of the lot.

The expansion continues for the dead as for the living. Grace Church is acquiring a neighboring house with a yard suitable for expanding the 19th-century cemetery. The plan is to create a columbarium to receive and memorialize cremated ashes.

When the Browns arrived, Clarke Parish had no Sunday School or Christian Education program. Cathy Brown, trained as an elementary school teacher with a Master of Education degree, initiated an active program. For well over 25 years, she taught, facilitated, and directed Christian learning for the church. She took many junior- and senior-high school students on a variety of ski trips, retreats, and missions. These included mission work trips to Episcopal Church camps in Virginia, Idaho, and Alaska.
The mission work locally helped Habitat for Humanity, and teams made trips to New Orleans following Hurricane Katrina and to Staten Island following Super Storm Sandy. Cathy took groups of teens across the country by train to spend a week on retreat at Priest Lake, Idaho. Another group spent a week whitewater rafting on the Salmon and Snake rivers.

She taught numerous Confirmation classes for teens and adults, led forty-hour famines, and coordinated countless fundraisers to finance trips and activities. As the Browns depart, Clarke Parish has a vibrant Christian education program, now under the expert leadership of Ms. Robin McFillen.

The community impact of the Browns’ three churches has extended well beyond the limits of their own buildings. As a senior partner in the Ministerial Fellowship, Dwight has enlisted the cooperation of other Clarke County organizations — religious and civic — in a whole list of projects: FISH food and clothing distributions, the Blue Ridge Hospice, the Stop-Hunger-Now program with Rotary, the Winchester Area Temporary Thermal Shelter (WATTS) with Ruritan and other churches, the high school baccalaureate services and the backpack ministry for school children on weekends and school holidays.

Several board members of the Josephine Museum attend St. Mary’s. Dwight serves on the Social Services Board. Grace Church offers interdenominational Lenten Wednesday noon services, at which Dwight, an able pianist, accompanies the hymns before luncheons in the parish hall.

Grace Church participates in observances of Good Friday, Thanksgiving, annual “pulpit swaps,” and other community events. An A.A. chapter meets in their building. The congregation of St. Bridget’s met there until they could build their own church home, and now the Church of New Beginnings meets in the Sunday School chapel weekly.
Grace Church sponsors a Boy Scout troop in addition to its own Sunday School, including an adult class that Father Dwight teaches. He visits frequently with elderly members at Westminster-Canterbury retirement community and on rotation with other clergy at Greenfield and Godfrey House.

Dwight’s ministry also connects Clarke County with the wider world. Nearby he has helped to promote the Episcopal Church camp at Shrinemont, and has met with regional church representatives as their dean. Far away, Dwight is a canon in a diocese in Central Uganda, where he has taken part in three mission trips and on three occasions has been able to bring their Bishop here. The Grace congregation has worked to provide safe water sources for several Ugandan villages. The concern now is to help the African and American churches understand each other’s cultural anomalies: We to accept their practice of polygamy, they to accept our gay relationships.

The Browns have given a great deal to Clarke County in 32 years, and there is more to come. On May 28, St. Mary’s will hold its annual Strawberry Festival, the day before Dwight’s final service at Grace Church. That afternoon, May 29, the churches plan a reception at 2pm for the community at the rectory beside Grace’s grounds.

On June 18, as part of the moving process, the Browns will hold a sale of the household surplus that they will not be taking along to Idaho. They will dedicate the proceeds from the sale to youth ministry.

Too soon, whenever Berryville hears the 1957 Harry Byrd chimes from the Grace Church bell tower, we will feel a sweet, sad nostalgia at the reminder of the music and harmony that Dwight and Cathy Brown leave us as their legacy.

Hospice Offers Comfort and Acknowledgement
We are one with you