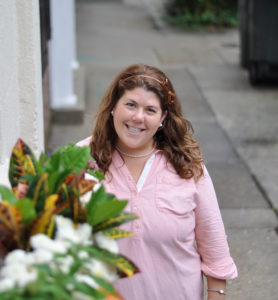 Kids running through the woods. Kids grinning and mugging for the camera. Kids sometimes looking sulky or even crying. Kids giggling and peeking from behind trees. Kids with their siblings, their moms and dads and their dogs. Clarke County photographer Bre Bogert loves catching families in natural moments against a backdrop of nature, unpaved roads, old barns and rustic benches. The uniform of the day is often jeans.
But you don’t have to have (or be) a kid to enjoy a photo shoot with Bogert. She also does informal portraits of individuals, couples, and even pets.
Interestingly, in some of Bogert’s most captivating shots, her subjects have their backs to the camera, walking away down narrowing country lanes or running off through the woods. Observers are left to wonder where they are going and to make up their
own stories.
Bogert says about half of her business is photographing people and animals. The other half is shooting nature and rural landscapes, and she offers prints for sale. She is adept at capturing the tranquil essence of the countryside in simple scenes. It might be a curious cow peering through a fence, a barn and silo in snow, the tailgate of an old truck, a railroad track winding away into the distance, or a gravel road in fading, dappled autumn sun.
You could say that Bogert was practically born with a camera in her hand. She has been taking pictures most of her life, learning from her father, a dedicated amateur photographer who took pictures wherever he went. Every summer they headed out to Colorado, where he photographed landscapes, mountains, nature and horses.
In Colorado, they did a lot of travelling on horseback. “Dad took pictures of everything with his old Nikon,” Bogert recalled. “He always carried his camera equipment, and he even had a saddlebag for our horses to carry it.”
As a child, Bogert practiced photography at her father’s side. “He was an engineer for NASA who worked on the lunar module,” she explained. “He was very exacting because he was an engineer, and he taught me everything about cameras and photography. I learned all about apertures, F-stops, speed, all the manual controls.”
Her father passed away when she was 13, but he left her his Nikon camera, which she still has. It’s presently in a specialized camera shop
being repaired.
She started taking pictures on the side as a teenager, and continued through college in her spare time. She used film cameras until about eight years ago, when she finally went digital, but she uses various lenses and manual controls.
She began her career by taking landscape pictures, and in the beginning she was
hesitant to start photographing people. “Now I love taking pictures of people,” she said, “but I was scared at first because I didn’t like posed pictures. I got around that by concentrating on what I call my ‘natural moments portraits’.”
Bogert doesn’t do much in the way of weddings because of the traditional poses and formality generally demanded of wedding photographs, but she will consider weddings on a case-by-case basis. “I hired a photojournalist for my own wedding because I wanted more behind-the-scenes type pictures. Besides,” she laughed, “it was cheaper!”
She also enjoys what would probably be called art photography — studies of architectural details of buildings.  She finds beauty in a weathered wooden door, a wrought iron gate decorated by a dewy spider web, a rusty outdoor faucet, a skeleton key in an old lock.  A series of her photos of locks and doors was purchased to decorate an “escape room,” the trendy activity game where a group of people is locked in a room decorated in a theme that goes with a story. They must work together to find hidden clues and solve puzzles that will lead them to the key to escape the room in a given amount
of time.
Bogert says that about 99 per cent of her photos are taken around Clarke County. She does a few complimentary shoots over the year on subjects of her choice. Every holiday season, Bogert does what she calls a “deserving family shoot.” This year, it celebrated the hopeful occasion when a young local girl who was seriously injured in a house fire found a courageous matching donor for a kidney transplant.
Bogert is now offering gift certificates that can be given in any denomination, good for full or mini photo sessions or for a print of any of her landscape, rural or architectural photos.
Visit her Facebook page at BreBogertPhotography; see her work at: brebogertphotography.pixieset.com.
Share Clarke!

A Builder of Houses Which Become Homes

The Observer’s 2015 Guide to Summer Camps

Medicare And How It Could Be Affected By The New Tax Bill Just in case you were...
Scroll to top