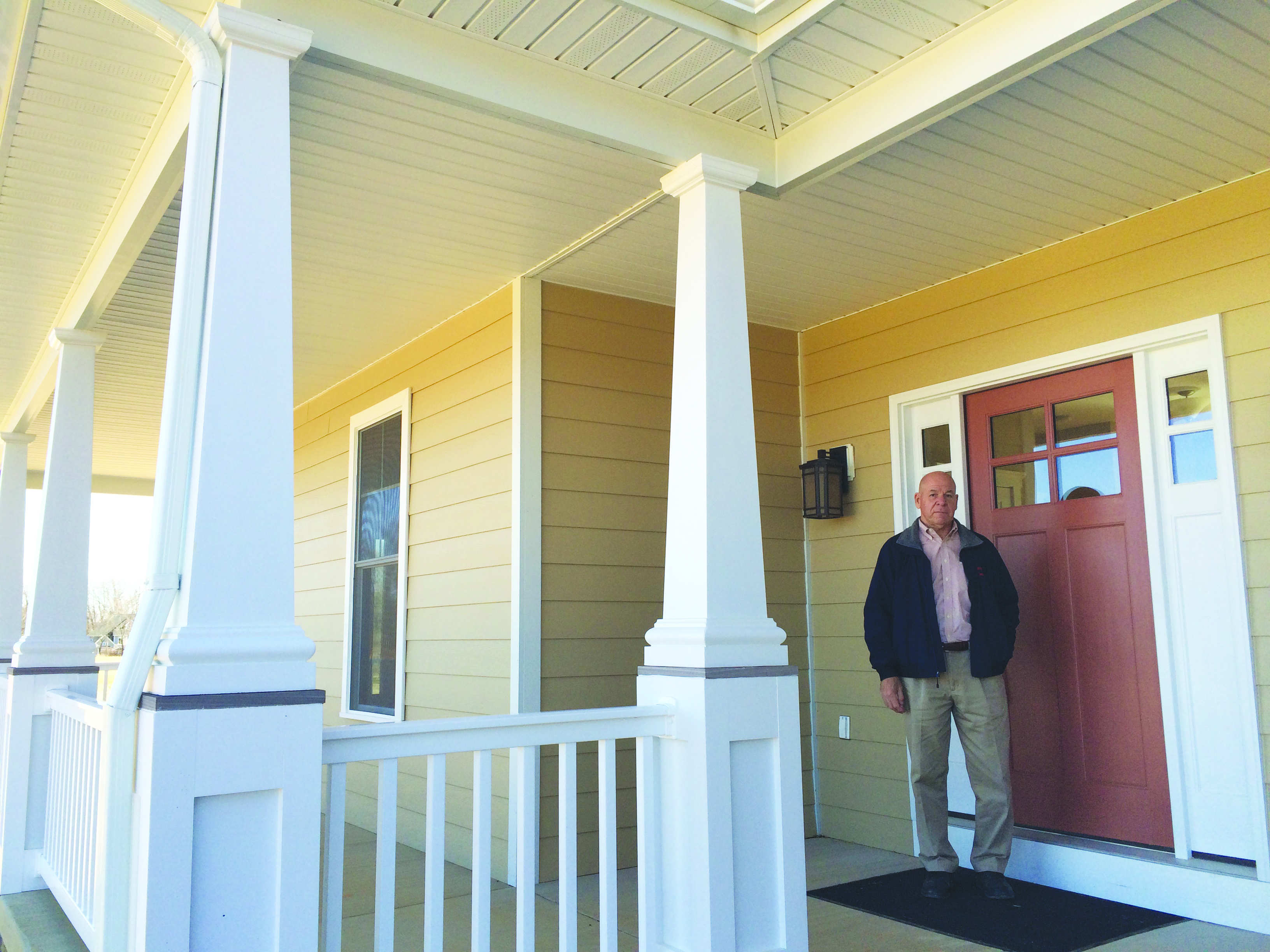 For many people, myself included, the concept of home is irrevocably tied to the basic sources of contentment and joy: family, security, stability, refuge. Home is many things to many people, of course. For some, home is a town. For some, it is a beloved person. For some, it is the experience of a particular activity (think on horseback for a dedicated rider, or at the helm for a zealous sailor). Most commonly though, home is a physical abode: it is, for many fortunates, a structure with a roof, a foundation, walls, floors, plumbing, lighting, heating, and cooling.

Looking around my home today, I am choosing to celebrate the people who are responsible for creating these containers in which we keep ourselves, our activities, our memories. Today I salute the builders of the houses which become our homes.

There are many lucky families in Clarke and Frederick counties who are living in houses built by Patriot Homes, a local company which has been around for 25 years. Founded by Dennis and Gail Tomsey, this is an example of a company which built its reputation along with its houses, as exemplified by the number of repeat clients they have served over the years. One client has had Patriot Homes build three different houses for his family. Another had them build a modest house when there were four in the family, and then a bigger one when they grew to six. Then a house for their aunt. Now there’s talk of downsizing as the kids have grown (and, by the way, one of the kids is engaged and maybe a small house in time for the wedding). Families grow and shrink and spread out, and Patriot Homes accommodates them. This is how a builder’s reputation grows. In fact, two successful real estate agents who had worked with any number of local builders chose Patriot Homes when the time came for them to build their own houses.

In conversation with Dennis Tomsey, I learn a little bit about the highs and lows of the building trade. I hear about the thrilling first years, when the couple went out on a pretty long limb, buying 63 lots in Pembridge Heights and founding their shiny new company. They set up a trailer office and built the first house as a model. Dennis says “Before we finished that first house, we had probably sold 24 houses. A lot of them I sold from the hood of my truck! We worked seven days a week.” During one busy year, they built 17 houses chosen by buyers from a number of models.

Following that impressive beginning, Patriot Homes began building in Pioneer Heights, working on six to twelve lots at a time. In this period, the company began building custom homes for people who owned lots and had a specific idea of the sort of house they wanted. Times began to change, and Patriot Homes found themselves building fancier houses on bigger lots, often in Oakdale Crossing and Raven Pointe. As real estate values climbed, lots became more expensive, and buyers wanted larger and more elaborate houses to suit the bigger lot sizes.

No one knows better than a builder that the real estate market can behave like the proverbial rollercoaster—a ride which exhilarates some and makes others ill. Well, when the ride swooped through 2007, builders everywhere started feeling queasy. Patriot Homes was no exception. The company found itself with several beautiful homes, built at a cost which the market would no longer support. But Patriot Homes was solid enough to hold on, and Dennis took a long, hard look at the market, coming to the conclusion that the houses which were selling in those cautious days were smaller houses at lower prices—specifically, the old reliable 2,000 square-foot ranch house. So those were what he built on the extra lots the company owned, and they did indeed sell. The trend continues even now. Dennis says “Out of the last 12 houses we’ve built, only one is a two-story.” Quite a change from the madcap days of just a few years ago when bigger was always better. The ranch house, after all, has a very wide appeal, from first-time buyers to single-parent families, empty-nesters, and retirees.

When I ask Dennis to what he attributes his staying power through the heights and depths, he says, “Our success has been that we build a quality home that has real value for the dollar. Most of our sales come from referrals, from people who have lived with that quality.” Their team of subcontractors has mostly been working with them for 12 to 15 years or longer. That in itself is another indication of success, in my opinion.

Patriot Homes also does renovations, additions, garages, decks, sun-rooms, and other projects. They converted a cabin to a contemporary. They built a fantastic contemporary house with three levels of glass cantilevered over a lake. They have built colonials and Cape Cod-style houses, contemporaries and Craftsmen. They are nothing if not versatile.

On the market at this moment is a beautiful example of the company’s work. It is a 3,000 square-foot Craftsman-style home on more than two acres in the Stonymeade subdivision in Frederick County. It backs up to farmland with lovely mountain vistas. The details, such as those of the shelves in the back entrance space, and the materials, such as the real stone which wraps around the lower exterior of the whole house, set this home apart. It is bright and airy, spacious and inviting.

Off To The Races
Do We Really Need The IRS? Around Clarke in April & May
Scroll to top