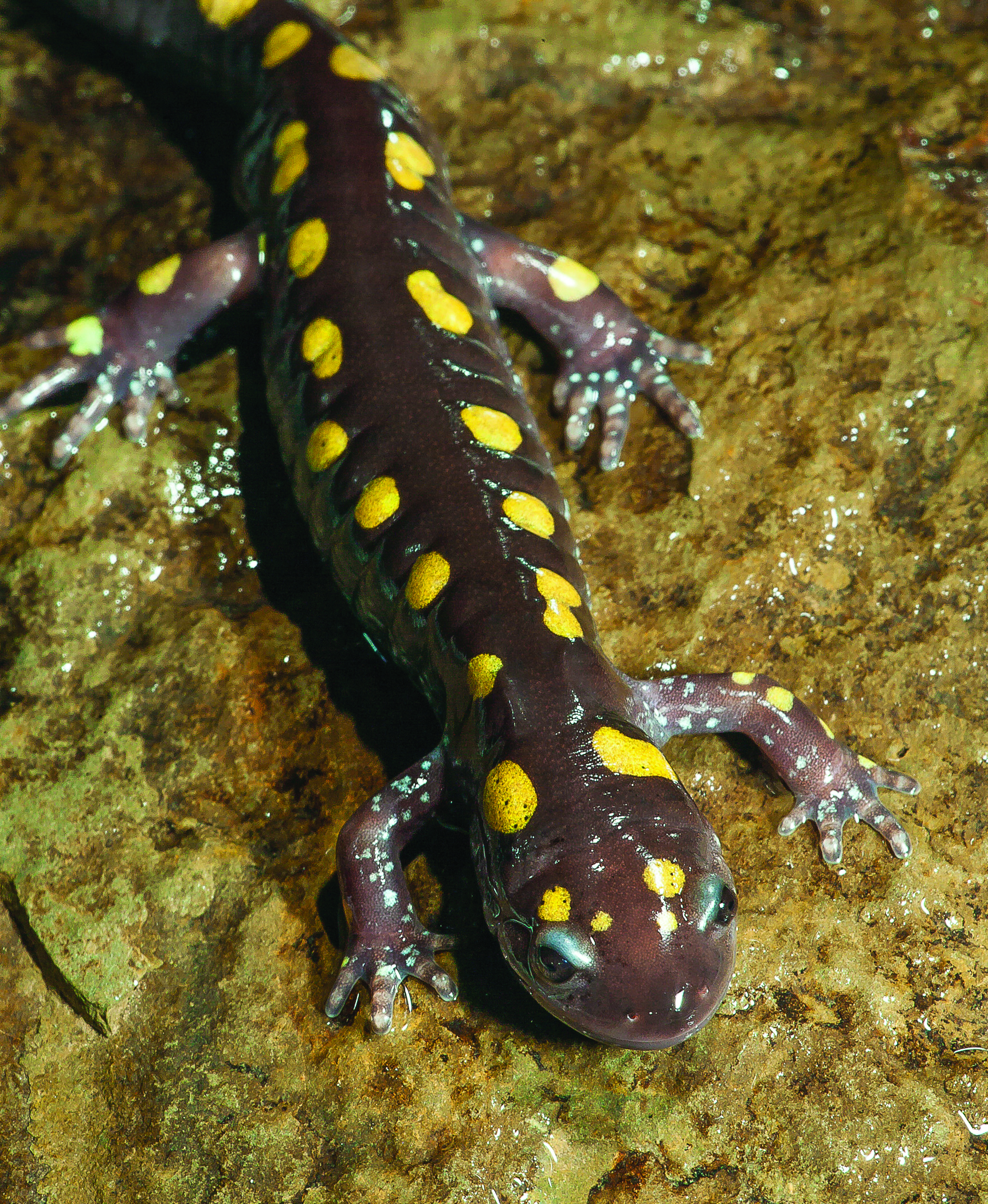 As it has for countless thousands of years, an amazing event begins to unfold with the first warm rains of late winter. Even though thick patches of ice may remain on ponds and pools, spotted salamanders will emerge from their forest floor burrows. Under the cover of darkness they resolutely amble their way to the nearest vernal pool, slipping under the ice at an exposed edge. They select vernal pools, temporary bodies of water from snowmelt and springs rains, since permanent ponds can support fish that would prey on their eggs and young. As long as the air temperature remains at or above 45 degrees, the spotted salamanders will perform this migration to breeding areas, even if they have to walk over snow and ice to get there.

What really makes this behavior a spectacle is that hundreds, maybe thousands, of spotted salamanders will emerge on the same night near suitable pools. They all seem to know exactly where they are headed. These mass migrations of salamanders, to breeding pools, must be seen to be appreciated. The ground is alive with the wriggling masses of black salamanders dotted with bright yellow, intent on continuing their kind. Moving en masse can create problems. To keep predators at bay, perturbed spotted salamanders secret a poisonous, milky liquid from the skin of their neck and back. However, this poison is no match for cars and trucks using the roads that salamanders must cross at night. Hundreds, perhaps thousands, may be killed as they try to complete this age-old ritual of renewal.

Males and females arrive at the pools during the first few nights of suitable weather. Males attach white, cone-like spermatophores—packets enclosing the sperm cells—to submerged leaves and stems. A female will pick these up with her cloaca, often internalizing several packets to ensure that her eggs are fertilized by more than one male! Females begin laying eggs, many hundreds, in large gelatinous clusters, attached to submerged stems, which soon become opalescent, or milky-looking. The thick coating helps to protect the developing eggs from desiccation and predation. From late-February through March it is not uncommon to see several spotted salamander egg masses attached to vegetation under the surface of vernal pools. Disturbances that create excessive siltation, or muddiness, of the water can cover and suffocate the eggs or newly emerged larvae. Some egg masses may even be green from a thin layer of algae.

Once the breeding spectacle is over spotted salamanders return to their burrowing way of life—digging under moist leaf litter and into moist, loose soils searching for small invertebrates to eat. If a cold spell occurs while they are at the pool, they will burrow into the muddy bottom and rest there, occasionally floating to the water’s surface to gulp a breath of air.

Worldwide there are 655 species of salamanders. The greatest diversity of species occurs in the eastern deciduous forests of North America. Salamanders were once thought to be fireproof. Perhaps this fable came from salamanders emerging from rotten logs that were placed on a fire. These salamanders, no doubt, had burrowed into these rotten logs looking for shelter and food and then emerged in an attempt to escape the heat.

In our area there are perhaps a dozen easily found species, but none so beautiful or spectacular as the spotted salamander.

We Make the Road, the Road Makes Us
Changes that Matter