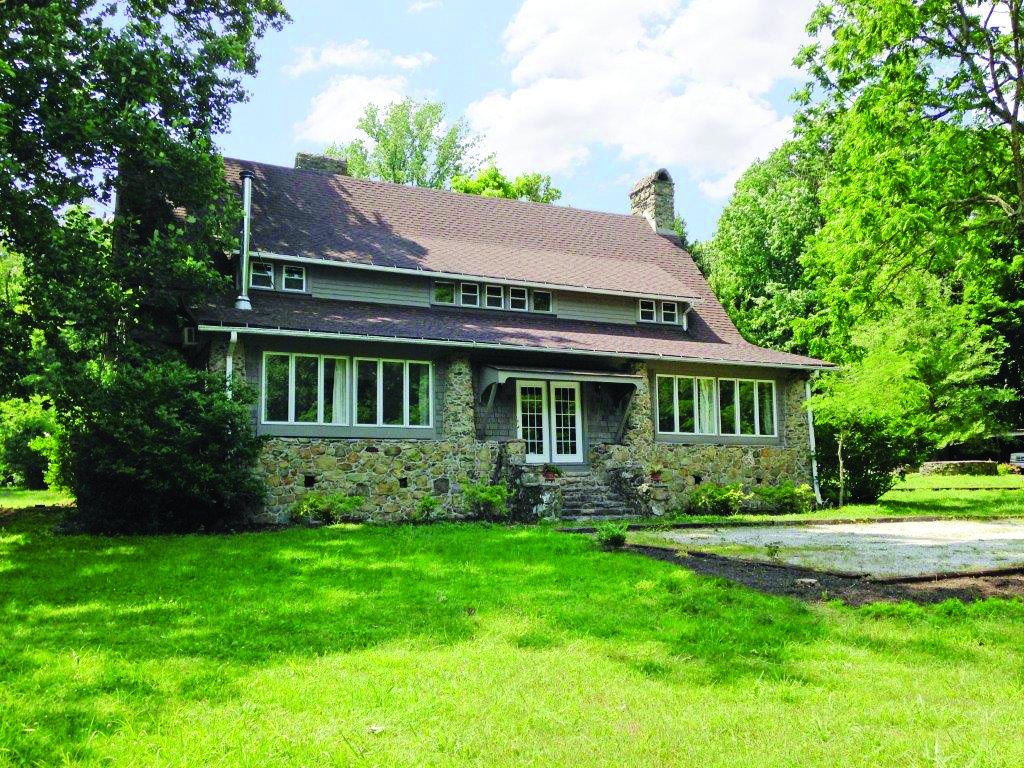 Do you have an olfactory memory? Does the smell of almond extract suddenly have you back in your grandmother’s kitchen? How about the smell of a freshly sharpened pencil? Are you at your desk on the first day of third grade, watching the teacher write her name on the board in a beautiful script you never did manage to attain? Most of us come across these scents now and then, and are beamed back in time to a very specific moment or place. I experienced a powerful shift of dimension last week when I entered the dwelling called Solitude on the mountain, just over the border into Loudoun County.

The time shift struck the moment I walked in the side entrance of the old place: it was the fragrance of summer vacations in my Great-Aunt Pat’s house in Thousand Islands on the St. Lawrence River. The smell of a house which has rested in silent contemplation of the bright summer past and anticipation of the sunlit one to come. Solitude, like my aunt’s house, has known the joys of summer vacation, and has also been the cozy refuge from the storms of February. I’m thinking that the huge stone fireplace in the beamed living room is a heart-warming center for Yuletide celebrations, and the lovely glade over which the house has presided for more than a hundred years is a heavenly backdrop for the spring wildflowers and the blazing autumn leaves.

The mountain was and is a place where city dwellers have built getaways for more than a century. In the days before clean city water and air-conditioning, the idea for some was to get out of the heat and possible contagion of the city and out to the cool, healthy mountain air. So families came for summers, rather than weekends. Then there came the trend of building hunting lodges, many of which were quite rustic. In 1900, the Southern Railway, predecessor of the Old Dominion Railroad, extended its railroad four miles from Round Hill to Bluemont. This greatly aided the efforts of those city dwellers who wished to enjoy the great outdoors on our mountain. One of these was Assistant Attorney General James C. McReynolds (under President Theodore Roosevelt), who built this beautiful, spacious, and sturdy hunting lodge, and called it Solitude. McReynolds later became U.S. Attorney General under Woodrow Wilson, who then appointed him to the Supreme Court, where he served until his retirement in 1941.

Once cars and navigable roads were everywhere, these houses were used more and more as weekend retreats. Many of these old retreats now house fortunate occupants year round. The house called Solitude has probably been all of these to a number of different families in its 111 years, and has most recently been a full-time home. But the elements of vacation house are built right in: the thick stone columns that once held up the roof of a deep porch, which now are embedded in the wall of the enclosed sunroom. The flagstone floor in the corner of the kitchen supporting the fascinating old wood-burning cookstove. The unplaned branches and trunks which make up the banister and the paneling, plus five fireplaces. The top-floor rooms with their slanting eves and old floorboards are the perfect setting for bunk beds and deep armchairs for story time.

But the comfort of the old structure will accommodate daily life beautifully as well. The kitchen is shining and convenient, with a large, granite-topped island and lots of room for a big table. Its door leads into the roomy dining room with a wall of windows showing a beguiling aspect of yard and woods. These and the spacious living room with its beamed ceilings and stone hearth, the long sunroom, a full bathroom, and two other rooms, each with stone fireplace, make up the downstairs. I rest my hand on the enchanting branched banister, and climb the stairs to a cozy landing, then on up to the second floor, where there are two large bedrooms and a bathroom. The bedrooms have wooden ceilings, paneling, stone fireplaces, window seats – right out of a story book. More stairs up to the third floor, with its two cozy rooms under the eaves, and I have seen the whole interior of the house. But there are more surprises outside.

The house is on 14 acres, nearly two acres of which are the clearing around the house. From the moment I pull in the driveway and pass between two stone columns, I feel I’m entering a different, possibly enchanted, world. There is a large old shed along the driveway, and tucked back against the trees is a small stone building that looks like a small pavilion, with sliding glass doors and a patio. My imagination instantly conjures ways to enjoy this space: a guest house, an artist’s studio, a space for yoga and meditation, a kids’ lair, or a kennel. On a practical note, the owner enjoys pride of possession of a handsome and fully functional outhouse! And the totally private and serene clearing surrounded by forest ensures that the place was not ill-named. Solitude is on the market now, and happy will be its new owners.