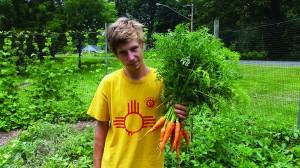 Nestled peacefully in the Blue Ridge Mountains about halfway between the Shenandoah River and the Appalachian Trail there is a charming little restaurant that serves what might be the best home cooked meal around.

The Pine Grove Restaurant is a real gem just off the beaten path in Bluemont. It has served for years as a community gathering place, first as the grocery store and gas station, later as a restaurant, and now as a paragon of old-fashioned home-style country cooking.

The grocery store was built in the late 1940s by Ralph May and his wife Louise on land purchased with the proceeds from Ralph’s military service in Europe. When Ralph had finished his obligation to the Army, the May family did a thriving little business selling fresh meat, fresh bread (sometimes baked by the Cistercian monks at Cool Spring), bags of ice from the only ice machine on the mountain at the time, and the coldest beer for miles around. They sold beer like it was going out of style. Mr. May drank his own Michelob warm, a habit he apparently picked up in Germany during the war.

The Pine Grove Service Station also had a couple of gasoline pumps, but mostly sold gas to the locals—there just wasn’t enough room to service tractor trailers. In fact, the big trucks preferred to get through that stretch of the old highway as quickly and smoothly as they possibly could because it was not unheard of for a trailer to jackknife at the harrowing Horseshoe Curve.

Eddie May, who grew up in his father’s store, looked after the Pepsi machine. His younger sister Diane had charge of the Coke machine. He reports with satisfaction that he sold more soft drinks because his vending machine offered not only Pepsi, but also Mountain Dew and Kickapoo Joy Juice (a citrus-flavored soda that seems to be making a bit of a comeback). The placid village of Pine Grove, already acquainted with armed conflict, it seems saw some of the early skirmishes of the Cola Wars.

Eddie remembers going down to the Shenandoah Retreat golf course along the river (which had been developed as a country club and weekend retreat in 1952) as a boy, and hunting all night for earthworms. He’d typically collect a five-gallon bucket full of nightcrawlers and sell them as bait at the store. The dollar a dozen he’d collect was his allowance. When bait was scarce, he’d sometimes get the price up to $1.25 or even $1.50 per dozen worms, a most profitable return. A hint of nostalgia crosses his features as he recalls the days when they sold gas for 30 cents a gallon and cigarettes for a quarter a pack.

Eddie also spent many happy hours as a teenager hunting for artifacts back by the creek behind the store and down at the river’s edge. Over the years he gathered quite a collection of arrowheads, and also Minié balls, US Army belt buckles and breastplates, and even the odd bayonet left over from the Civil War.

The Civil War had shattered the peace of the Blue Ridge in the midsummer of 1864. The old Colonial Highway, which in the late eighteenth century was a toll road between Snickers Gap at the top of the mountain and Snickers Ferry down at the river (and was overseen by Edward Snickers himself back when young George Washington was surveying the area), saw a good deal of military traffic in the first weeks of July that year.

After his failed attack on the Washington, D.C. defenses at Fort Stevens on July 11, 1864, Confederate Lieutenant General Jubal Early retreated along that highway into the Shenandoah Valley and set up headquarters at Berryville. The pursuing federal army took control of Snickers Gap (which now divides Loudoun and Clarke counties) and set up artillery covering the western slopes of the Blue Ridge down to the Shenandoah River. Major General John Gordon’s division was left to guard the river crossing at Castleman’s Ferry (a.k.a. Snickers Ford), which it did successfully against several Union attempts to get across.

On February 18, 1864, the Union did a reconnaissance in force, crossing the river at the island fords about a mile upriver from the ferry. The armies clashed. The ensuing battle claimed nearly 850 casualties. In the confusion of the battle, a number of Union soldiers leapt unwittingly into the deep water at Parker’s Hole and drowned. Stories have been told of bass fisherman fifty years later thinking they had made the catch of a lifetime only to pull an old musket from the dark waters.

By 1973, it was clear to Mrs. May that the time had come to sell the store while it might still be sold. Plans were in the works for Route 7 to be expanded, and to bypass Pine Grove. In the summer of 1973, she sold the property to Earl and Shirley Tomblin, who converted the store into a restaurant. Five years later the Tomblins sold the restaurant to Eddie and Dorothy Stone, who ran it until 1994, when they sold it to Malcolm and Shirley Brown and their partner, Geoff Cole, whose family still visits the restaurant. Joan Farris bought it in 1999, and in 2001 sold it to Glen Poe—who owns it today.

The Route 7 expansion and straightening did wonders for commuters who live west of the Shenandoah River. The new four lane road, known now as Harry Byrd Highway, carries thousands of drivers into and out of the Washington, DC metropolitan area every day. But many of them race across the mountain completely unaware that such a village as Pine Grove even exists.

The Pine Grove Restaurant has gone through many changes over the years, some ups, some downs, some successes and some difficulties. It seems at last to have hit its stride. After a number of years of starts and stops, three years ago Glen Poe met Phyllis Mainhart. He felt she could revive the authentic country cooking and casual family
atmosphere for everyone to enjoy.

Phyllis says she wasn’t really looking for another business venture, but a couple of old friends heard that the restaurant was coming available. And because she had successfully run a similar country restaurant in Stephen’s City some years earlier, these friends called her and said, “Why don’t you take that place on?”

Phyllis and Glen both had a clear—and very similar—idea of what would work in terms of food, service and atmosphere. Phyllis’ vision was simple: “I wanted it to be the best home cooked meal around, the best home cooking restaurant in the area.” With loyal support from family members and long time local residents who work in the restaurant either serving or cooking, that vision has become a reality. All of the food is homemade, from scratch, and largely from old family recipes. Her sisters bake pies and whip up chicken salads, potato salads, macaroni salads and even broccoli salads that have to be tried to be believed.

The whole enterprise has the feel of a family effort, a community effort. They strive to use local products, growing many of their vegetables either on site or in the gardens at the Mercer farm. They buy their meats and sausages locally, like the beef from Audley Farms in Berryville—fresh, antibiotic- and hormone-free. They use only the freshest eggs, which are served in one of their breakfast masterpieces: the Clarke County Eggs Benedict. This is serious country cooking. It’s an open faced biscuit topped with fried eggs and sliced ham, smothered in sausage gravy, and served with a side of home fries. Just imagine. The Buckwheat & Blueberry pancakes are also quite a hit.

Pine Grove Restaurant also has a small farm market. They continue to expand the
offerings of local delicacies. You can buy local honey,
organic farm eggs, even whole fresh homemade pies.
Phyllis’ son Eddie raises grass fed organic beef which they sell whole or in parts. They’ve raised organic Cornish game hens and turkeys for
Thanksgiving—which always sell out in
short order. They even do
some gluten free items and are looking
to add more. Pretty soon
they’ll be adding ice-cream
and milkshakes.

Pine Grove has patrons from all over the region, near and far. From Phyllis’ old schoolmates and other local regulars, including church groups, to motorcycle clubs from the city, bicyclists, and hikers passing by on the Appalachian Trail, the restaurant has become a lively gathering place. A couple from Alexandria makes a regular weekend trek just to enjoy breakfast on the front deck in the summertime. A large table in the back room that seats 25 comfortably has been used for rehearsal dinners, birthdays, and other large family gatherings.

The restaurant opens at 7am, seven days a week, and serves until 8pm, Monday through Saturday and until 2pm on Sundays. And by the way, serving until eight means exactly that: If you arrive at 7:55 pm, they will happily serve you dinner and allow you to eat it at your leisure, in peace. Breakfast is served all day every day, in addition to lunch and dinner.

Most who have enjoyed the wonderful atmosphere, friendly service and the fantastic food at the Pine Grove Restaurant subscribe to a simple truth: That is one good old-fashioned home-style country meal!

As the Crow Flies